Tangled Up in Blue: Policing the American City 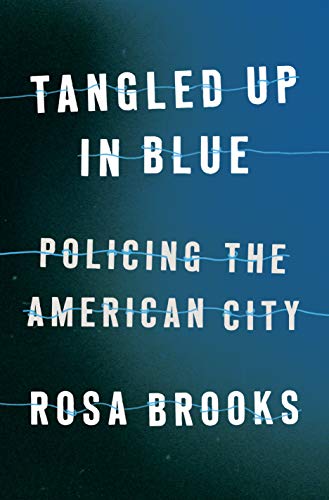 “Provocative, intelligent, and useful, Tangled Up in Blue will help many readers understand the nuances shaping the present crisis in American policing.”

Rosa Brooks, a liberal, 40ish Georgetown law professor, knew “American policing was broken,” part of a “harsh, unjust, and biased criminal justice system.” And yet she was curious. Or perhaps, she muses, she was “just bored,” or had read “too much crime fiction.”

When those around her either opposed or laughed at the idea of her becoming a police officer in Washington, D.C., she knew she had to do it.

Tangled Up in Blue is the revealing and well-written story of her 18 months as a part-time patrol officer in the poorest, high-crime neighborhoods of the capital’s 7th Police Precinct. She recounts her police academy training, the attitudes of officers and fellow recruits, her encounters with minority men and women engaged in street crime, and her successful effort to introduce desperately needed reforms aimed at addressing racial disparities she saw on the job.

First, for all her liberal biases she views policing with an open, non-judgmental mind. She finds cynicism as well as “compassion, courage, and creativity” everywhere. Most notably, she is horrified, in 2015 and 2016, when national controversies are raging over policing, race, and use of force, to realize her police academy curriculum offers “nothing at all” on race and policing.

“All over the United States, people were talking about race and policing, police violence, and police reform,” she writes. “But virtually none of this conversation made it into the police academy’s classrooms. Recruits talked about it, of course, but mostly in the hallways and the lunchroom, and the discussions were hushed and awkward. About half of the new recruits at the Metropolitan Police Academy each year are African Americans, and it was clear that most recruits weren’t comfortable talking about race.”

In watching videos of controversial police shootings, “it became natural to see the officer’s side of the story. Ordinary people might see a cop brutally murdering someone who hadn’t done anything wrong, but we could see an officer reacting as we had all been trained to react.”

An “exaggerated sense of risk” governs how police react to the unexpected, she says. Police “end up killing so many people” because everything in their training tells them to “expect danger from every quarter.”

Second, Brooks manages to see all this clearly despite her unusually radical family background. She grew up amid “radicals and bookish oddballs,” overachievers all, who deemed attending protests a form of “recreation.” Her mother, the noted social critic and author Barbara Ehrenreich, tear-gassed at one such event, viewed police with disdain: “The police are the enemy,” she declared.

Like a Greek chorus, she reminds her daughter constantly that she ought to be out organizing for social change rather than serving as a part-time cop. In the end, pleased by official implementation of Brooks’s suggested police training reforms, Ehrenreich essentially tells her daughter proudly that she done good.

Above all, Tangled Up in Blue helps us see the deep complexities of policing and their effects on men and women in uniform. Too often, cops work within absurdities and injustices “inherent” in the system. “For police officers, the racism that has shaped the system for so long means that even the most thoughtful and fair-minded police officers—even those who see and decry the structural impact of racism—often face nothing but bad choices.”

Besides detailing her experiences dealing with crime from disorderly conduct to shootings, Brooks covers over-policing, militarization of police forces, and the tendency of police—and other human beings—to “construct stories to explain and justify our own biases and behavior.”

Provocative, intelligent, and useful, Tangled Up in Blue will help many readers understand the nuances shaping the present crisis in American policing.