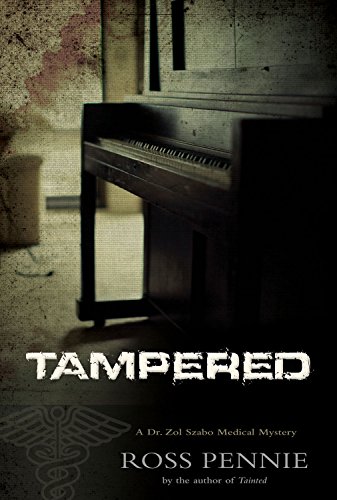 The prose in this new series goes down as smoothly as the fine scotch favored by the lead character, Dr. Zol Szabo.

Although Szabo is the lead character, he might not qualify as the main character. His colleagues get substantial page time, so that the secondary characters Hamish Wakefield and Natasha Sharma often seem more central to the story, and at times they are more interesting. Nevertheless, the book is dubbed “A Dr. Zol Szabo Medical Mystery,” and he’s what holds the series together—at least for the two volumes published so far.

The best way to enjoy book two (Tampered) is to read book one (Tainted) beforehand. Tampered continues the adventures of the investigative team introduced in the foundation story without adding much to their personalities. In book one, their physical and psychological traits are richly developed, whereas in book two these are skimmed over to leave room for more story. This works fine for people reading the books in succession, but anyone starting with Tampered will be shortchanged.

For instance, “Zol’s well-honed sense of smell told him more about a person’s traits and habits than any photograph.” That’s all you get about Dr. Szabo’s important talent, aside from a few references to it sprinkled throughout the novel.

Book one, however, gives many examples of his unusually keen sense of smell and how it influences his life and career. Smells provide critical clues to the mystery and help his mind connect disparate elements that lead to a solution. This enhanced olfactory sense is shared by a female private detective who becomes his lover. How and why they come together is presented in detail in Tainted and deepens its credibility.

Absent that backstory, the one-line description in Tampered feels disembodied. Likewise, it’s hard to understand what Dr. Szabo’s girlfriend is doing in the second book other than helping it reach the grave-danger scene toward the end.

Dr. Szabo’s sidekicks Hamish and Natasha are similarly flattened, though this is not to say they aren’t well portrayed. In both books, Mr. Pennie performs the literary equivalent of both sketching and painting portraits with confident, skilled strokes. The line in Tampered about Dr. Szabo’s sense of smell is one example of sketching. A more colorful one: “Moments later, she burst into the kitchen like a barefoot sunflower.”

Here’s a painting: “Tuesday morning, Zol turned off Aberdeen Street into Eaglescliff Avenue. And into Narnia. It might as well have been a fantasy world for all the resemblance the cul-de-sac paid to the rest of the lower city. Gorgeous mansions sat like haughty, overdressed dowagers at a nineteenth-century garden party. At the far end, the sheer face of the Niagara Escarpment defended the enclave from the riffraff to the south with its rampart of wooded limestone. Again, Zol felt uncouth driving his muddy minivan into such opulence. Everyone here would have a Porsche or a Mercedes tucked in the garage.”

Mr. Pennie also offers some appealing metaphors and similes: “Producing a soufflé was like uncovering the culprit in an outbreak investigation. You amassed the ingredients like facts, checked them for freshness or accuracy, assembled them with some measure of skill, then served the results for everyone to see. If your work was built out of dubious components, it fell flat. As did your reputation. Zol craved the simple triumph of a feathery soufflé, a golden dome rising above plain white porcelain.”

Mr. Pennie serves up original one-liners, as well: “‘I feel like a fool for stating the obvious,’ said Colleen, ‘but we’re missing something that’s staring us in the face like a herd of zebras on the open savanna.’”

The author folds descriptions into the narrative without interrupting its steady progress from scene to scene, telling readers what they need to know, when they need to know it, with appropriately placed foreshadowing. The pace is calmer than the average medical thriller, although the book shares elements with that genre, such as the sharp, single-word titles—Tainted. Tampered—along with medical crises and political intrigues that propel things out of control. (Note to American audiences of this Canadian novel: You will never want socialized medicine after reading this book!)

Despite the medical-thriller undertone, Tampered, like its predecessor, is a graceful blend of two mystery subgenres: police procedural and amateur sleuth. The core characters, instead of being law-enforcement officials or private citizens, are public health workers—physicians and scientists—investigating epidemics that prove to be crimes in disguise.

The book’s viewpoint rotates as each character pursues plausible red herrings. Ultimately the threads left dangling from wrong turns and dead ends weave together into the correct solution, which gets delayed by all-too-human blind spots, distractions, and miscommunication, as well as institutional stupidity and power struggles that infuriate characters and readers alike. (Note to all readers from any country: You will think twice about eating, taking medicines, or trusting your governments again after reading these books!)

The Hamilton, Ontario, environs are lovingly presented despite a cynicism about Canadian politics. The political aspects are peripheral to the human concerns that form the book’s heart. Both Tampered and Tainted treat people of all stripes equally and respectfully. Tampered features senior citizens, who play key roles in the investigation—in fact, the mystery cannot be solved without their help. They also inject words of wisdom that might rankle from younger people, such as, “. . . happiness is nothing more than good health and a bad memory.”

Some of these aphorisms linger in Dr. Szabo’s good memory: “Alone in his car, his stomach in knots over the Prime Minister’s unexpected scrutiny, Zol thought of Art Greenwood’s mantra: Make every week count, son. Art said not to worry yourself sick over any single day, but aim instead for a major satisfaction every week.”

Simple but true, and illustrative of how important relationships and quality of life are to the characters. Sometimes their observations are poignant, as when one of the oldsters in the nursing home faces mortality. “His spirits sagged as he passed that horrible sign on Betty’s door. Stop: Restricted Access, Contact Precautions. It was as though they’d consigned her to a nuclear dumping site, a load of toxic waste.”

Tampered never veers far from the public health scenario and teaches a lot about the science and systems behind it without going over the layperson’s head. Mr. Pennie treats us to a suspenseful and clever mystery in an environment new to the genre, written by somebody who’s been there, done that, and guides us through.

Since there’s no shortage of plot material in this arena, the series could have a long run if Mr. Pennie has the endurance. If he also wants to win awards for future volumes, as he did for the first one, he will need to master the art of character building over time.