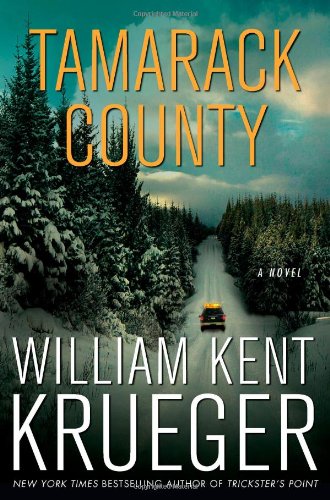 In any long-running series, the characters must grow or change in order to remain credible and hold reader interest.

Mr. Krueger tackles that challenge in his 13th Cork O’Connor mystery, showing us there’s no place like home and nothing like love to keep a damaged man’s spirit alive.

As usual, the main plot is an ugly crime that involves Cork and his family. But here it serves more as a device to carry multiple themes rather than the driving force of the story.

These themes explore the diverse faces of love, being physically and spiritually lost, and finding peace in a violent life.

They apply to everyone in Cork’s family: himself as father and lawman, grappling with age and loneliness. His daughter Annie, knocked off course toward being a nun by her first passionate affair. His son Stephen, torn between his own first love and becoming a healer. His other daughter Jenny, struggling to be a writer while raising an adopted Ojibwe son.

(Jenny, having been traumatized in previous volumes, this time serves as rock and compass for the others.)

Because of its many themes and subplots, the book’s crime story is more unfocused than usual. There are just too many things going on with too many people.

But they are tied together by the crimes, which reach back decades to their motivations and force the O’Connors to face their pasts, presents, and futures. Also to learn what really matters in their lives.

The family’s usual guidepost, Henry Meloux—“a mentor, a spiritual adviser, a surrogate father, and always a friend”—is absent in this story, moved to warmer and safer quarters for the winter now that he’s into his nineties. He reappears toward the end to fulfill his role, but seems more like a convenient spirit than his usual realistic self.

He does, however, provide connective tissue between the family’s disparate belief systems, allowing them to showcase how shared faith holds people together regardless of what clothes it wears. This has long been a feature of the series in how it presents white and Indian cultures—their similarities and clashes—with Cork, part Irish and part Ojibwe, wedged in between.

Another signature element is the northern Minnesota landscape. In Tamarack County it’s midwinter, where all of life’s struggles come out in harsh relief. Here Mr. Krueger’s writing style stands out, capturing the elements as well as any human characters.

He shows us, for instance, not how cold and snowy it is, but what it’s like doing search and rescue in a blizzard. “They didn’t talk. As it was, the forest was alive with noises. The big wind ran through the pine trees and spruce and poplar with a sound like the rush of floodwater, and the branches creaked and groaned and scraped against another, and it made Cork think of skeletons going at it in a free-for-all.”

Or how one copes with subzero temperatures: “She put on her new parka and went from a slender woman to a walrus.”

And the upside of living in northern climes: “The sun off the snow was a blinding hammer, and Cork wore his tinted goggles against the glare. The temperature was double digits below zero and expected to rise only a few degrees that day. . . . He loved how the deep cold cleaned the air and how everything he looked at seemed more clearly defined. In summer, the heat and the humidity . . . made things seem to melt into one another like the images of an oil painting in which the colors had run. In winter, a cold winter especially, each thing brought into being by God or the Great Mystery or Kitchimanidoo or whatever you chose to call the force of creation stood out separately from every other thing in an almost mystical way.”

Anyone who lives in a four-season climate will recognize these details: “Outside, the air hit him like a fist.” And: “He stood, inhaling air so bitter cold that it was like a sharp blade slicing the inside of each nostril and exhaling explosions of vaporous white.”

Such imagery enlivens a dark narrative about human emotion and desperation. It also underscores the theme about home.

We can count on Mr. Krueger to deliver an original adventure in many moods and layers. In Tamarack County, life triumphs over claw and tooth in the natural, human, and spiritual worlds.