Talking to Strangers: What We Should Know about the People We Don't Know 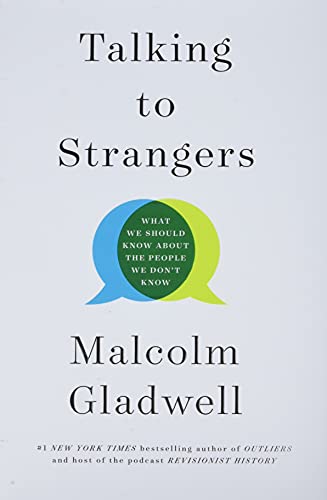 “Although its parts are fine, their sum does not quite add up to what we expect in a book by Gladwell.”

Talking to Strangers engages readers from the get-go with a riveting partial transcript of Sandra Bland’s unfortunate Texas traffic stop and eventual jail suicide, then loses them as the book progresses. Full of interesting stories about famous people—strangers to each other—who have been tragically misunderstood or whose failure to understand others has led to personal or global disaster, it’s an interesting, yet unsatisfying read. Although its parts are fine, their sum does not quite add up to what we expect in a book by Gladwell.

Gladwell sets forth his premise clearly: “We think we can easily see into the hearts of others based on the flimsiest of clues. We jump at the chance to judge strangers. . . . If I can convince you of one thing in this book, let it be this: Strangers are not easy.”

As proof, he takes us back into history and across the globe—through the Bland debacle, former British Prime Minister Neville Chamberlain’s catastrophic misjudgment of Adolf Hitler’s intentions after meeting with him briefly, the CIA’s blindness to a dangerous Cuban spy who for years worked as a double agent, Bernie Madoff’s Ponzi-scheme that bilked millions from his victims, the sexual abuse of young boys perpetrated by Penn State’s former defensive coordinator Jerry Sandusky, and the wrongful conviction of American Amanda Knox for murdering her roommate in Italy.

Gladwell explains the reasons that humans have difficulty assessing strangers. One is that we are poor at detecting lies due to slipping into “default to truth” in which “our operating assumption is that the people we are dealing with are honest.” This happens because in evolutionary terms, for group cohesiveness and because people are generally honest, it makes more sense to believe that our fellow humans are good rather than bad and truthful rather than deceptive.

The good news is that we can move beyond this default mode if we pay attention and wait to see if a case builds that shows someone’s true colors to be different than our original assumption. Gladwell explains how this shift to truth gets triggered: “A truth is not the same as a suspicion, or the first sliver of doubt. We fall out of truth-default mode only when the case against our initial assumption becomes definitive.”

Gladwell makes the argument that because society is unable to function effectively without relying on the default-to-truth paradigm, victims of stranger miscalculation deserve more sympathy than censure. Readers might disagree and find other motivations for our willful ignorance and savagery, including pure selfishness and greed.

A second reason that we run into trouble assessing strangers relates to our belief in the concept of “transparency”: that there ought to be and is an inside-outside match in people, an expectation that outward behaviors indicating honesty or deception mirror a person’s true motivation.

To illustrate the myth of transparency, Gladwell uses examples of Madoff and Sandusky—the way their sociopathic personas are intended to deflect from their actions—as well as of how Knox’s idiosyncratic and typically American personality gets her convicted of murder because of its mismatch to Italian cultural mores and expectations.

A third reason humans fall short in evaluating strangers involves the context of situations in which behavior occurs, a dynamic called “coupling: . . . the idea that behaviors are linked to very specific circumstances and conditions.” Coupling theory maintains that people take actions, often impulsively, in certain situations that they would not choose if these circumstances were not present. To prove this point, Gladwell cites examples of research from policing showing that there is something about certain streets or neighborhoods in cities or towns that make them exponentially more likely to invite crime than other areas.

We are often, insists Gladwell, unpredictable due to specific circumstances that trigger our actions. Wouldn’t rapes occur far less often if people didn’t drink until they blacked out and the decision-making centers of the brain went off line? Would the poet Sylvia Plath have committed suicide via a gas oven if there were no longer such a type of oven in her home? Would the number of people who tried to kill themselves by jumping off San Francisco’s Golden Gate Bridge have been as high, if proper, long called for precautions had been put in place in a timely fashion?

The take-away messages from the book include recognizing that most of us are inclined to believe rather than disbelieve strangers because of the benefits this attitude confers on us individually and as a society, and that we should at least consider that there might be a mismatch between how people act and what they feel or think. At the least, after finishing this book, readers might never look at strangers quite the same way again.