A Talk in the Park: Nine Decades of Baseball Tales from the Broadcast Booth 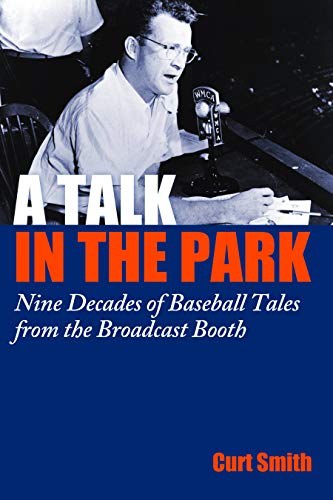 “A Talk In The Park is baseball as you’ve never read it—and how you always remembered hearing it.”

Starting on the acknowledgements page, author Curt Smith uses the proper noun “Voices,” its capital V assertive in its respect for the broadcasters it proxies for; it is a little odd at first, but quickly becomes a natural part of the narrative.

A Talk in the Park: Nine Decades of Baseball Tales from the Broadcast Booth doesn’t just draw a picture for the reader but blends color within the lines to bring us perspective, humor, and humanity from the people who have relayed our national pastime over the air, through our transistor radios, car speakers, and from our television sets.

Baseball is said to be many things: a game of stats, a game of inches, a game of failure. If you love stats, A Talk in the Park won’t necessarily cure your joneses—they’re present, certainly, but they don’t take center stage. Almost any book about the game will quote stats and player history, recall perfect games, and who played what position, what manager did what, and what game means most to “the game.”

Mr. Smith has, through the filter of over 100 voices, given us the chance to sit with the guys who tell us about our teams, the same guys who are, really, still little boys taking part in a game they love.

This isn’t baseball as usual—this is the human essence of the game from the vantage point of those who eat, sleep, breathe, and bleed it. Talk’s success derives from its presentation, a hands-off approach to storytelling that allows its patrons to talk about the personal side of the sport without all the chronic show-and-tell. Mr. Smith provides eloquent introductions to each chapter, then lets his guests do the talking—it’s their take, their experience, related first-hand—not author Smith’s retelling.

What could have been a volume of indecorous, rehashed interviews with Mr. Smith at the helm, blossoms into a fan’s treat so steeped in personality and baseball richness you can practically smell the hot dogs wafting up from the page surfaces.

Brimming with anecdotes that span the gap from bizarre to elegiac Talk provides an almost cosmic link to childhood, a sly wink to the excited youngster reveling in meeting their hero or feeling the afterburn of a “did you see that?!” moment. A story about the size of Bruce Bochy’s [now manager of the San Francisco Giants] catcher’s helmet, so big his teammates were able to fit a 6-pack of beer and ice in it; another in which Gorman Thomas refers to a bloop single—on air—as a “flaming duck fart”, resulting in an immediate phone call from the powers-that-be. Lamented Matt Vasgersian, “Not surprisingly, the rest of the telecast went from potentially brilliant to a colossal bore.”

I was born and raised in a state that didn’t have major league baseball until 1998. We had the Pacific Coast League, farm teams for the other MLB clubs. As such, we didn’t get to grow up with voices like Vin Scully, Ernie Harwell, or Jack Buck. Ernie Harwell was much beloved in the baseball world, something I came to understand as I began to follow the game via my Diamondbacks—but I never had an inkling of how profoundly respected and admired he was by everyone he came in contact with.

One of Talk’s greatest successes is its ability to transcend the notion of rote allegory and let the reader absorb, let him feel what the broadcaster felt. No pretension or personal aggrandizement, just an open seat, an invitation to sit with these guys and get your ear bent for hours. The undercurrent of this human element is constant, and in its denouement I admit to feeling a genuine sense of loss over Ernie Harwell, a voice I never heard.

If you remember your first game, the bright lights on a warm summer night and the scent of the grass, read this book; if you grew up in the Midwest or around the East Coast—read this book; if listening to the voices on the radio do play-by-play takes you back or conjures warm memories . . . read this book. A Talk in the Park is baseball as you’ve never read it—and how you always remembered hearing it.