Talk to Me: A Novel 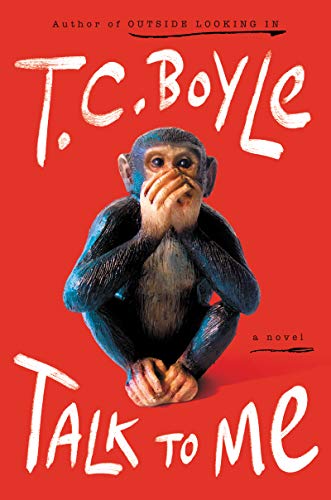 “Talk to Me is an engrossing, thought-provoking read.”

Most of us have had an animal in our lives with whom we felt a deep connection, as though they understood us. But what if you also understood the animal? What if the two of you could truly communicate? Would the animal still be a pet or would it become something more?

The gray area around that “something more” is the question at the heart of T. C Boyle’s Talk to Me. When undergraduate Aimee Villard sees a professor from her university, Guy Schermerhorn, on television with a chimpanzee named Sam who is being raised as human and communicates through sign language, she is so taken with the chimp that she signs on as an assistant on the project. She soon develops equally deep and complex relationships with both Guy and Sam.

The questions Aimee ponders upon first seeing Sam on television are the same questions Boyle poses to the reader: “And what if it really was possible to speak to the members of another species—to converse with them, not just give commands or coach them in the way people coached parrots to regurgitate what they’d been taught to say? Or dogs. Good boy, roll over, doggie want a treat? It wouldn’t be like that. It would be a two-way conversation, a sharing of thoughts on the deepest level. People talked about life on other planets, but this was right here in front of us, a whole other consciousness just waiting to be unlocked. Did apes have God? Did they have souls? Did they know about death and redemption? About Jesus? About prayer? The economy, rockets, space? Did they miss the jungle? Did they even know what the jungle was? What about the collective unconscious—did it extend to apes? Did they dream? Make wishes? Hope for the future?”

Talk to Me isn’t the first novel in recent memory to explore the relationships between chimps and humans. Karen Joy Fowler’s PEN/Faulkner Award-winning We Are All Completely Beside Ourselves (2013) and Debbie Lee Wesselman’s sadly overlooked Captivity (2009) tread similar ground, using experiments in the 1970s and ’80s in which chimpanzees were raised within human families as the jumping off point for their narratives.

Where Boyle diverges from these is the depth with which Sam’s character is developed. Make no mistake, Sam is a fully developed character with a pronounced point of view. There’s always a gamble in shifting point of view to a non-human character, but Boyle does so convincingly. Sam’s sections feel natural, believable. And it’s the strength of that writing that gives the novel its punch.

It’s easy to write an “issue” novel. It’s easy to preach to the reader. Boyle is generally successful in avoiding telling the reader how to feel by using the most basic tools available to the novelist: creating sympathetic characters and placing them in situations that touch the reader’s emotions. That some of these characters aren’t human is irrelevant. Talk to Me is an engrossing, thought-provoking read.