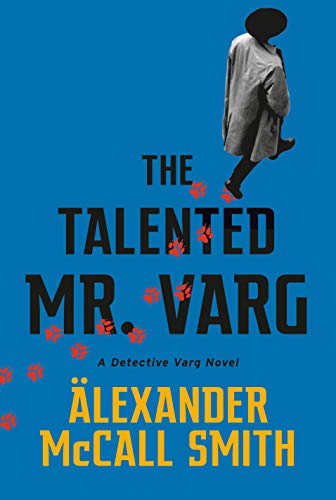 Surely, Alexander McCall Smith isn’t the only philosopher in the world who writes novels. But he’s probably the best known and one of the most commercially successful.

With over 100 novels under his belt for adults and children—plus a dozen academic texts and an assortment of short stories and anthologies—he’s also astoundingly prolific. This is a bonanza for readers who love his work.

It’s a fresh bonanza to have the next novel available. The Talented Mr. Varg is book 2 in the Detective Varg series, set in Sweden. It’s never quite clear in the story what Detective Varg’s talent is, because the narrative doesn’t poke you in the eye with it.

Rather, in smooth outward ripples from the story’s core, we see that Ulf Varg’s true talent is being able to perceive and understand everyone’s side in tricky situations and to choose the most peaceful and productive—and diplomatic—solution.

Or so it goes in his office, the Department of Sensitive Crimes. Solving his own problems is a different challenge.

Number one on Ulf’s personal problem list is his secret love for his colleague, Anna. She is married, he is not; and to make it worse, she approaches him to investigate her husband, whom she believes is having an affair.

Ulf quickly discovers the truth, and he agonizes over how to tell her. Eliminating her husband from the equation might open the door to Ulf with Anna, but he rears back from capitalizing on that for moral reasons, not to mention the complications it would bring to their professional relationship in their tiny office.

“He saw Anna waiting anxiously for his verdict, which could be only one word: yes. One word would end a marriage and a world. A short, single word that was normally so positive but could be so negative too. He sighed. Sometimes that was the only reaction one could muster to the world. One might intend to emit a more positive sound—a gasp of pleasure, for example—and it would come out as a sigh. That was what the world provoked in us—a sigh; for all the things we had to do that we did not want to do; for all the things we had not done but that we would like to have done; for all that, and more—a sigh.”

This description exemplifies the poignancy that underlies so many moments in the novel. (In all of McCall Smith’s novels, actually.) For instance:

“Love was a wound in the soul—we told ourselves that it was something else, but it was simply a wound, as real and as troublesome as any real tearing of the flesh. And it came upon us at random, afflicting us without warning, occurring when we were sitting in a café or walking across a park or doing any of the other ordinary human things that filled our days: love came upon us and smote us as a biblical figure might smite an enemy. Love did that, for that was love was: an injury. We fondly thought that it was a blessing, but it was not.”

On the more pragmatic side of Ulf’s life, he must disentangle himself from the problem of receiving an illegal gift from a suspect in a sensitive crime. By policy, a police officer must reject any gifts on the job, but this gift kinda-sorta comes to him sideways in personal thanks from the exonerated thief. Ulf is too busy to pay attention at first. By the time he recognizes the conflict of interest, too much time has passed to fess up without jeopardizing his position. Any route around it compromises his values and reputation.

Meanwhile, he has a dog dilemma. In the previous volume, Ulf had to deal with his dog being clinically depressed. This time around, he has to deal with the dog’s deafness and amazing ability to lip-read, along with his neighbor who cares for the dog when Ulf is not at home.

The neighbor, whom he tolerates rather than likes, does him favors he relies on, and unexpectedly helps solve some of his department’s crimes with her insights. These create yet more personal or professional conflicts inside him.

Such conundrums are what tie Alexander McCall Smith’s works together. Readers of his other series—the renowned No. 1 Ladies’ Detective Agency being the most famous—will find similar philosophical troubles for the characters, be they in Sweden, Botswana, or Scotland. Indeed, you can pick up any of the books, and it’s almost like reading the same story set in different countries, different contexts.

But those differences keep the similarities interesting. We get to learn about other peoples and places while learning more about the commonalities of the human psyche. McCall Smith’s novels share the same intellectual and emotional investigation through quirky characters who are kind, open-minded, humane, and/or humorous. This combination doesn’t sound very exciting, but it is when you like thinking. McCall Smith’s characters think their way through the kinds of quandaries that stump readers in daily life.

Although the stories are categorized as crime novels or mysteries, they are not brainy puzzles like locked-room mysteries. And the protagonist, in this case Ulf, is never a brilliant intellectual outsmarting a brilliant criminal. Instead, Ulf et al. are regular people doing their jobs, living their lives, navigating their way through social and personal relationships.

The crimes involve psychological hurt, sometimes financial shenanigans, all falling within the realms of morality­—ethics—fairness—honesty—harmony—justice. Each mystery centers on a wrong, or a perceived wrong, somebody did to another, which just needs identifying and sorting out. An everyday kind of problem that real folks have to handle throughout their lives.

Thus the “bonanza” reaction when a new book by McCall Smith comes out. Readers get to walk again alongside gentle, sympathetic characters through environments so realistically portrayed we might as well be there. Even if the psychological pathways are familiar, the scenery and personalities are fresh in each venture.

Most appealing, we get to see how others solve problems like ours and emerge on the upside. These qualities keep us turning pages with eager interest and pangs of empathy, instead of heart-pounding, sweaty palmed suspense.