The Talent Code: Greatness Isn't Born. It's Grown. Here's How. 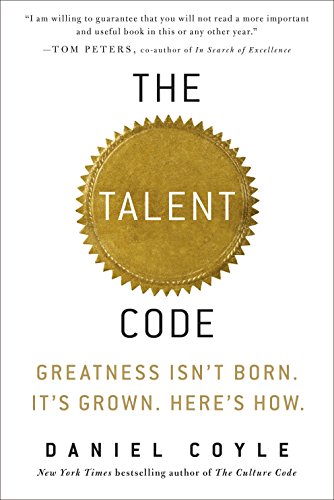 (Bantam Dell, May 2009) In the nature vs. nurture argument, Daniel Coyle comes down firmly on the side of nurture, and makes a compelling case. Mr. Coyle travels to talent “hotspots” around the globe, trying to determine what makes them unique. The recipe for success he uncovers isn’t exactly groundbreaking. Repetition (practice) at a task leads to mastery. If one has the requisite drive to master something, with enough focused practice, one will achieve that goal. What Coyle does offer that is new is insights into why this is so. The answer comes in the form of myelin—the fatty substance that insulates the axon (the long, slender projection of a neuron that transmits electrical impulses). When a neuron is fired repeatedly, myelin builds up around the axon, insulating it and thereby causing it to fire even faster. This brings to mind an axiom introduced by Norman Doidge in his book The Brain That Changes Itself, which is: “Neurons that fire together, wire together.” Coyle believes this myelination is the basis for talent. What is left out in his analysis is any consideration for disease or brain malformations. Also, it would seem (to use a sports analogy, which Coyle repeatedly does) that a game such as basketball is predisposed to favor individuals that are tall (an inherited trait). Finally, he does make some concessions that rare individuals may have an easier time achieving mastery. The Talent Code is a very engaging, thought-provoking work that is destined to be quoted often and will undoubtedly spur new research. The good news: You can increase performance with focused practice. The bad news: It’s hard work. Reviewer David Hersman is a multimedia producer and father of a child with autism and epilepsy.