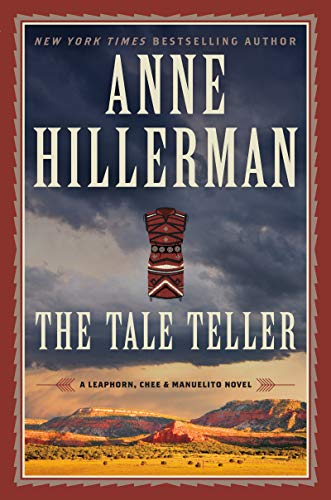 “more than just a police procedural set in the Southwest, it’s a reading experience not to be missed. Anne Hillerman has reached a new level of storytelling . . .”

While recovering from a gunshot wound to the head, retired Navajo Tribal Police lieutenant Joe Leaphorn agrees to investigate a case for a friend of his companion, anthropologist Louisa Bourebonette. An anonymous donation to the Navajo Nation Museum has arrived missing two invaluable items: a silver bracelet, and a dress said to have been worn by Juanita, wife of legendary 19th century Navajo chief Manuelito.

While Leaphorn investigates the disappearance of these items, Tribal Police officer Bernadette Manuelito is puzzled by an old man’s story of finding at a flea market an expensive silver and turquoise bolo tie that was stolen from his bedroom a month ago. Meanwhile her husband, Tribal Police officer Jim Chee, is investigating a string of burglaries around Chinle. Is there a possible connection?

When Bernie goes jogging, however, and discovers the body of a murder victim beside the path, the stakes become much higher. Are there dangerous forces loose in the Four Corners that could put their lives at risk? Will there be other victims if this rash of thefts goes unchecked?

The Tale Teller is the fifth novel in Anne Hillerman’s exemplary police procedural series set in the southwest United States. Her writing has moved to another level this time out, and a solid case could be made that it’s her best to date.

While her characters are familiar old friends to devoted readers, they once again appear in the pages of this new offering as rich and well-developed figures. An interesting wrinkle presents itself when Leaphorn’s head injury results in unexpected difficulties with spoken English. His initial reliance on Louisa while working the case in the field results in tensions between the two, and he struggles to make himself understood when interviewing unilingual English-speaking witnesses on his own. There’s a sense of relief, shared by the reader, when he can stick to Navajo.

Meanwhile, Bernie Manuelito continues to charm with her dogged seriousness and her unwavering devotion to Chee. When the narrator reminds us that while the FBI has jurisdiction over homicides Bernie has a “natural tendency to get involved,” we know she won’t rest until she understands exactly what happened to the murder victim she discovered. Her interactions with FBI special agent Sage Johnson, a much-improved secondary character, are both determined and amusing.

A staple of Hillerman procedurals is the use of multiple plot threads that come together “like weft and warp,” and the author again succeeds in launching Leaphorn, Bernie, and Chee in separate directions that ultimately overlap either in case details or in theme. Communication is always the key, and while Leaphorn still doesn’t particularly like Chee, Bernie functions once more as the adhesive that seems to bring everyone together.

While characterization and plot development are strengths, perhaps Anne Hillerman’s finest achievement in The Tale Teller is the manner in which she integrates the setting of the novel into her work.

When Chee jumps into his SUV to drive from Chinle to Canyon de Chelly, the narrator tells us that “Tséyi’, the place deep in the rocks, made his heart sing . . . No matter how many times he saw them, the canyon’s buttes, spires, and mesas never failed to move him to a state of peace.”

Even more striking is when Joe Leaphorn similarly responds to his surroundings. Unlike Chee, he has never been one for spiritualism on a personal level, and yet we find him driving his beat-up truck over Narbona Pass and lowering his window: “The cool air smelled of ponderosa pine and spruce, and he absorbed the calm.”

Hillerman’s ability to weave these descriptive details into the inner workings of her characters with such gentle grace has become a hallmark of her fiction. Readers inhale the pine and spruce along with Leaphorn, they feel the morning’s heat on the trail to the Spider Rock overlook, and when Chee looks out over the stunning landscape and simply “stood in the sun, happy to be alive,” the reader gratefully absorbs the calm and the peace along with him.

The Tale Teller is more than just a police procedural set in the Southwest, it’s a reading experience not to be missed. Anne Hillerman has reached a new level of storytelling in this one, and she deserves recognition as one of the finest mystery authors currently working in the genre.