Taking Her Sides on Immortality 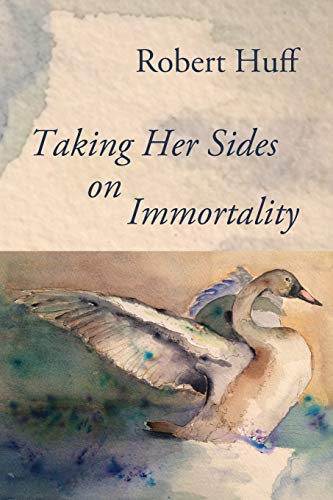 “To journey with Robert Huff . . . is to take a long hard look at the world and the self.”

Robert Huff (1924–1993) wrote and taught poetry at Western Washington University in Bellingham, Washington, during the transition years when American poetry moved from the modern era into the contemporary. His poems appeared in most of the major poetry publications alongside of his contemporaries: Theodore Roethke, Stanley Kunitz, James Wright, Richard Wilbur, Anthony Hecht, Denise Levertov, et. al.

His books include the award winning The Ventriloquist: New and Selected Poems (1977) and Shore Guide to Flocking Birds (1985). Though he continued to write and read his poems, a third manuscript did not appear during his lifetime, and not until now when the lost manuscript was found and put into print by Allen Frost and his literary press, good deed rain. Frost has also rescued last works by western poets Robert Sund and Clyde Sanborn.

To aid in this recovery and tribute to Huff’s work, Washington State poet laureate Sam Green, a student then colleague of Huff in the 1970s, has provided an essential introduction to the poet and his work. Huff’s own daughter Ursula McCabe, provides a lovely nature painting for the book’s cover. It’s a fine packing of a dead poet’s work.

"What I find most striking and valuable about Robert Huff's new poems is the drama and immediacy of their tone. Watch the complex way Huff makes beauty and goodness something to be angry about—and anger something to laugh at—so that, at the end of all this mixed emotion, beauty and goodness are more powerful and vivid than they could ever have been if no one got excited about them,” so said Annie Dillard of her old teaching colleague’s work. And it proves strikingly clear in Taking Her Sides on Immortality.

Huff is most adept in the modern formal methods of rhyme and meter. Even when he breaks away to free verse, the meter plays like an underscore of music. In his somewhat ironic portrait, “The Spirit of Grandmere Fontaine,” the lines move with clear precision and wit:

“Cordial, and not so utterly enthralled,

Had some kind aunt blessed me with one tintype

Of her at sweet sixteen in lace, posed, called

On to look not quite prim but less, well, ripe.”

His longish “A Country Tale” is full of fun and downright cleverness.

You could squeeze and chuck and pinch,

But he wailed against his daddy

Cleaving to his mama finch.”

All the bird references are important, for Huff, an expert birder, presents wonderful portraits of nature in these poems.

The other side of Huff, so strongly represented in this work, is his use of verse as invective against what he sees as the false and corrupt way of living and writing. His literary allusions are huge, and yet one would not like to be on the wrong end of his sharp verse, the target of his mockery.

He himself writes, “I spent prime years poking fun/ At male orangutans and became one.” And so self-mockery enters into both his mode of writing and his own self-reflection. Though a much-loved teacher, his addiction to drink, much like Dylan Thomas’, became a burden with age as did his darkened view of the moral demise of the world.

As poet Karl Shapiro wrote of Huff, “The best of his poetry speaks to us, our time and our situation, person by person. He makes poetry a form of friendship and reminds us what it is to be cherished in our ice age . . . He is what the good poet is today, hard, honest, warm, hurt, with his teeth on edge. More power to him.”

To journey with Robert Huff here is to take a long hard look at the world and the self.