Takes One to Know One: A Novel 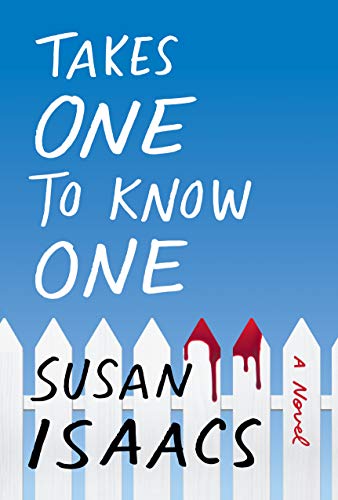 “Isaacs’ writing is clever and funny, with laugh-out-loud moments and strong character development.”

“‘I dreamed I was living in Queens again,’ I told Josh the next morning. We were in the bathroom, at our separate sinks on opposite walls. The countertops were pink-veined marble, as was the floor. Not really garish: His late wife, Dawn’s, style had been safely upscale suburban, which meant excess that never shouted: Hey look, great taste! It only whispered it.”

Corie Geller is trying to fit in. Really, she is. But it’s hard for a girl who grew up in Queens and had a career as an FBI agent to suddenly become the perfect suburban wife to a respected judge. She loves him and her adopted daughter Eliza, and she enjoys her job as an Arabic-language book scout, but something’s missing, especially since she isn’t allowed to even talk about her FBI past. Perhaps that’s why she can’t get over her strange feeling when she attends her weekly Wednesday meetings with other work-from-home business folks. One of the members of the group just seems odd, with some strange habits.

“I couldn’t stop wondering about Pete Delaney. Why was he perpetually watchful? What was the weird business about him and his car? I was less concerned about the phones, but that was a little odd, too. And why had he put his personality in a storage unit? It could have been that I was creating a Wednesday work of Fiction. Except maybe Pete also had a bit of a secret life. Maybe it takes on to know one.”

Corie takes her investigation to the next level, checking out whatever she can about Pete’s life and business dealings. She uses her law enforcement contacts when she can, but mostly she’s on her own. She finally involves her father, a retired NYPD detective, and together the two of them find clues and more reasons to believe that something really is up with this Delaney guy. How far should Corie take her snooping? And is it just snooping if there actually is something going on?

Isaacs’ writing is clever and funny, with laugh-out-loud moments and strong character development. Her descriptions of people, activities, and Corie’s thoughts are witty and unexpected, making each turn of the page fun and anticipatory. The story moves quickly, the characters’ actions seem organic and realistic, and the climax of the book is satisfying. Highly recommended for anyone who likes fast-paced storytelling, quirky and interesting characters, and a plot that keeps you guessing right along with the protagonist.