Takedown: A Small-Town Cop's Battle Against the Hells Angels and the Nation's Biggest Drug Gang 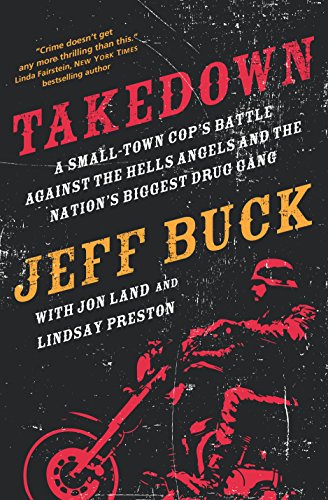 Did you know that more drugs come into the U.S. every year over the Canadian border than the Mexican border? Shocking though it may seem, that’s just one of the many revelatory nuggets scattered throughout Takedown: A Small-Town Cop’s Battle Against the Hells Angels and the Nation's Biggest Drug Gang. The fact that the book is a true story makes it all the more remarkable and mind-blowing.

The book begins with a poignant story of a young boy, eleven-year-old Daniel Desrochers, riding his bike to a local playground to meet some friends. They were late, so Daniel waited for them on the opposite side of the street facing a nondescript building. The building, as it turned out, was the headquarters of the notorious Rock Machine biker gang.

Parked outside the place was a Jeep belonging to Marc Dubé, one of the gang’s top drug runners and one of its reputed de facto leaders. Unbeknown to Dubé, the vehicle was packed with explosives, planted by psychopath Frank “Bull” Quellette.

The moment Dubé started the engine, the Jeep exploded into a million shards of flaming metal, killing him instantly. Across the street, Daniel was still seated atop his bike when a wave of steaming steel shards from the Jeep slammed into his young body, the force knocking him from his bike and into a wall.

Rushed to a hospital, Daniel lay in a coma for four days before dying. He became the first but not the last victim of a war that was about to spill over the border into the United States.

One paragraph sets the tone for this truly fascinating and jaw-dropping story of a small-town sheriff, Jeff Buck, battling legions of drug dealers, murderous Hells Angels and other assorted ruthless bad guys, while trying to maintain law-and-order for the good citizens of Reminderville and surrounding areas:

“Federal officials in both Canada and the United States have become increasingly aware of the problem, thanks in some part to the Quebec biker wars. It wouldn’t be those officials, though, who years later would ultimately bring down what was one of the biggest and most powerful drug gangs on either side of the border. It would be the police chief in the small town of Reminderville, Ohio, hundreds of miles away. Me.”

Jeff Buck (aka, Dope Ghost) thought he'd seen it all. Twenty years working undercover in the netherworld of drugs had left him burned out and grateful to assume the quiet job of police chief in the small town of Reminderville, Ohio. That is, until a simple domestic assault case featuring a Russian woman by the name of Yulia Abramovich leads to links in the murder of a drug runner in upstate New York and a syndicate smuggling billions of dollars in drugs across the U.S.-Canada border.

As Buck reluctantly plunges back into his old world of death and deceit, he uncovers a complex chain linking the Hells Angels to the Russian Mafia in a plot to use Native American tribal land to smuggle their deadly wares into the United States. From grow houses set ablaze in Quebec to the insular St. Regis Mohawk Indian Reservation, from board rooms and biker wars to the frozen rivers that serve as private turnpikes for the drug gangs, Buck opposes a serpentine criminal enterprise that has every reason to want to end his crusade in violence and bloodshed.

Ultimately, his efforts lead to an unprecedented slew of indictments on both sides of the border and prison terms for even the kingpins, toppling an empire once deemed invincible.

If you loved Narcos and Sons of Anarchy, then you’ll love this authoritative real-life account of the war on drugs. Powerful and original, each riveting chapter in Takedown is filled with illuminating and invaluable insights from one who fought on the frontline.

Perfect for a movie or TV series.