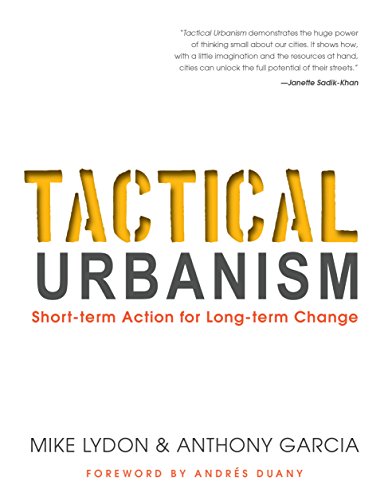 “a clarion call for citizen action, offering a cornucopia of examples . . .”

The urban design world today is preoccupied with megaprojects that dwarf and divide humankind. We have allowed the automobile to drive urban form, the profit motive to pave our greenbelts and the bureaucracy to bury even the smallest mitigating initiative in a morass of regulations and permits.

Another world is possible. The urban scale can be reconnected with the human scale at the neighborhood level from the bottom up.

In Tactical Urbanism planners Mike Lydon and Anthony Garcia show how these creative, low-tech improvements in urban livability can be achieved via a decentralized alternative to big planning that is sustainable and restorative while building community.

“Tactical Urbanism is an approach to neighborhood building and activation using short-term, low-cost and scalable interventions and policies.” It is increasingly employed by a variety of stake-holders including governments, business, non-profits, advocates, community groups and individuals to cut through red tape and sidestep resistance to change.

“The value of Tactical Urbanism is in breaking through the gridlock of what we call the Big Planning Process . . . with incremental projects and policies that can be adjusted on the fly while never losing sight of long-term and large-scale goals.”

By definition, Tactical Urbanism involves small but adroit actions intended to serve a larger purpose, although the instigators may not have a specific outcome in mind other than immediate positive change. As such, it is highly instrumental and experimental, with the city as a laboratory for practical testing of ideas about enhancing the urban experience. If these are successful, that’s great! If not, only a small amount of time and money has been invested.

For example, yarnbombing (the crocheting of street signs, trees, bike racks, and so on) constitutes street art or opportunistic placemaking. On the other hand, Tactical Urbanism aims to prompt long-term change such as remediation of an infrastructural deficiency via resident-installed traffic calmers.

“Because the places people inhabit are never static, Tactical Urbanism doesn’t propose one-size-fits-all solutions but intentional and flexible responses.”  Accordingly, there is considerable variation in the type of tactics employed subject to availability of resources, the capabilities of initiators, and the reservoir of underused space awaiting transformation into human-friendly place according to the wants and needs of community members.

Projects also run the gamut of legality. For example, the nighttime painting of guerilla crosswalks by neighborhood residents falls on the unsanctioned end and the New York City Department of Transportation’s placement of lawn chairs in Times Square is on the sanctioned end.

Tactical Urbanism as presented in this book is a method for achieving balance between extemporized small-scale city making from available materials (bricolage) and top-down regulation of urban placemaking for the public good.

Although the term itself is relatively new, many of the concepts, tactics and procedures are not. So a chapter is devoted to highlighting half a dozen moments from history to illustrate how informal, portable, temporary and tactical interventions have shaped the socio-economic and physical fabric of our cities from the very first street in Neolithic times.

But the meat of the book is an extended section focusing on five types of interventions that best exemplify the power of Tactical Urbanism to achieve long-term change through short-term tactics: Intersection Repair, Guerilla Wayfinding, Build a Better Block, Parkmaking, and Pavement to Plazas.

Several mini case studies are outlined under each of the five categories. For example, we read the tale of how Portland, Oregon, has developed a culture of civic participation geared toward transforming the city around its signature project: intersection repair. This involves reclaiming an intersection to make it a pleasant and safe place for neighbors to gather, using such tactics as slowing dividers, painting the street, providing seating, community bulletin boards, children’s play areas, and even self-service refreshments.

This was achieved by using loopholes in existing regulations, such as applying for a standard block party permit to close the streets to cars; however, instead of holding the customary barbecue, the neighborhood group might paint a large mural covering the entire intersection.

At first, city officials threatened fines for altering city streets without their permission. One official even pronounced: “That’s public space—so no one can use it.” Yet surveys showed that locals overwhelmingly perceived increased neighborhood communication along with a decrease in crime and traffic speed, so city officials have embraced the concept and related projects of the City Repair not-for-profit which provides support for Portlanders interested in improving their neighborhoods.

Although the penultimate chapter offers up-to-date practical advice for those interested in initiating their own project, Tactical Urbanism is not a DIY manual. Given the diversity of cultures and contexts we inhabit a single “how-to guide” would be contrary to the spirit of situation-specific, flexible and agile improvisation and mobilization inherent in this consciously subversive approach to re-making our cities.

Like the projects presented here, Tactical Urbanism as a book does not always work. The introduction, where the authors sketch the scope rooted in their own experiences, is rather a slow read, particularly if you are unfamiliar with urban design and the  passions of planners. Also, the historical snapshots are of necessity fragmented and not well integrated into the contemporary case studies. Plus, the urban design language which creeps in on occasion counters the inclusive intent.

Nonetheless, Tactical Urbanism is a clarion call for citizen action, offering a cornucopia of examples and well-illustrated by photographs of how to effect lasting change through small but incremental steps toward building cities for communities rather than isolated individuals.