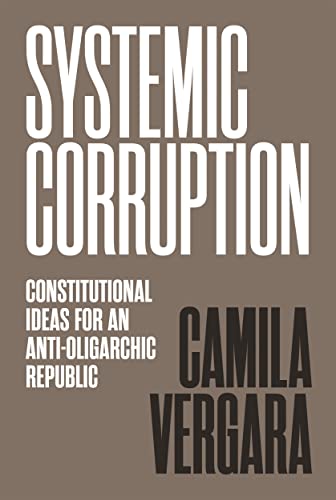 “Systemic Corruption: Constitutional Ideas for An Anti-Oligarchic Republic’s merit lies in its intellectual energy that the readers will sense in every chapter, striving hard to melt an immense iceberg of systemic corruption.”

Camila Vergara, a former Chilean journalist but currently a postdoctoral research scholar at a U.S. law school, has written a first-rate book exploring oligarchies' staying power in Western political systems. Building on the works of Machiavelli, Condorcet, and Arendt, Vergara investigates "systemic corruption" in representative democracies, a form of corruption that empowers oligarchies to grow their wealth at the expense of what she calls plebeians.

Instead of using the contemporary language of social, economic, and political rights laid out in the universal human rights treaties, Vergara employs archaic vocabulary, such as plebeians and phthora, found in early literature. Perhaps, the use of ancient words was indispensable to connect her thesis with the old books. Sadly, the archaic language might distract some readers.

Leaving aside the terminology, Vergara makes two simple but powerful points. A political system is corrupt if it fails to protect the people's economic rights (plebeians) and if a small minority (oligarchy) gathers a massive portion of wealth that the people have jointly generated. To this extent, Vergara's thesis is unimpeachable.

In the mid-20th century, nations fought over the superiority of some rights over the other. Western democracies preferred to protect civil and political rights and left the economic rights to the markets' mercy, thus guarding wealth oligarchies. In contrast, communist countries chose to defend economic rights but at the expense of usurping civil and political rights.

The world now realizes that regardless of economic ideology, the two sets of rights are inseparable. For example, a political system must not tear away the right to food from the freedom of religion or the right to medical care from free speech liberty. A meaningful life needs the entire package of rights, including social, economic, civil, and political rights.

Accordingly, under the human rights normative layout, a political system is philosophically incoherent (phthoric) if it protects some rights but not others or protects the people selectively.

Systemic Corruption is not about human rights but about political systems that tend to decay in favor of oligarchies. If left alone, says Vergara, the gravitational force of a system bends in favor of a select group (oligarchy) and away from the people (plebeians).

Citing Machiavelli, a point, which Vergara repeats in several chapters, focuses on the people's vigilance. Since the political system, including representative democracy, degenerates toward favoring oligarchies, the people need to be watchful. Oligarchies are in check only if the people are predisposed to revolt. "A little rebellion now and then is a good thing," Vergara cites Thomas Jefferson.

Rejecting the notion of harmony, Machiavelli endorses conflict as an anti-oligarchic weapon. Likewise, any systemic preference for order also weakens the people's power to watch over oligarchies bending the system in their favor. Neither harmony and nor order is conducive to the people's welfare. Much like Machiavelli, Vergara wants to build the constitution founded on the conflict between the people and the oligarchy, presupposing that inherent institutional conflict safeguards the people from the oligarchies' overreach.

Vergara brings in a brilliant metaphor to describe the oligarchies' domination, saying it is not "bad apples" but a "bad tree." However, unlike Marx, Vergara does not propose to uproot the tree and throw it way. She keeps the tree but asks the people to keep an eye on it.

The book replaces the Marxist notion of class warfare with the concept of systemic phthora. History demonstrates, and Vergara illustrates forcefully that the constitutions, including the U.S constitution, protect the property more than liberty, primarily because oligarchies and not the people make constitutions.

From time immemorial, across cultures, it is almost as good as natural law that oligarchies (including communists and the church) know how to manipulate the system to tuck away and hold wealth. They also know how to use coercive force to serve economic objectives. The system enslaves people if people refuse to surrender to the oligarchy.

The people elect subservience out of brute force, not due to lack of vigilance. To protect themselves and their families, many people choose systemic corruption over systemic oppression. If the cost of protest is too high, people do not protest.

As noted above, the author's classification between oligarchies and plebeians or between "few" and "many" is an oversimplification; and any institutional reforms based on this division will not work.

In a vast ethnically complex federation, such as the U.S. and India, the definition of "many" is elusive. First, political power is distributed between the center and many constituent states. Racism and caste system further complicate the classification of people. In the U.S., white plebeians have a very different view of an oligarchy than do Black plebeians. India allows the untouchables to contest elections to assemblies, but they remain devoid of social dignity even if elected.

Furthermore, the oligarchies that command the resources have internal conflicts, and the people almost always split into factions. In the 21st century, there's no monolithic "few," and there has never been a monolithic "many." For example, the Bezos, the Buffetts, and the Zuckerbergs constitute one type of oligarchy. Bushes, Clintons, and Trumps another. Wealth oligarchy and political oligarchy may not see each other favorably, though they need each other to survive.

The book does not mention corporate oligarchies as megacompanies rule the world and destabilize fledgling nations, more so than local oligarchies. Powerful labor unions strengthen the book's thesis that workers (plebeians) must unite against profit-driven corporations (oligarchies).

Machiavelli's Florence peopled with patricians and plebians can no longer furnish a useful model for the contemporary world. While ignoring the multiple socioeconomic layers of domination and subservience, binary social scientists cannot guide constitutional restructuring.

Vergara's proposals to restructure constitutions incorporating the people's vigilance is a respectable passion. Reforming the system from the ground up, from the grassroots, has been the romance of revolutions.

For furnishing a more bountiful life for the ordinary people, outstanding scholars like Vergara painstakingly synthesize old and new ideas, and they reimagine constitutions. Systemic Corruption: Constitutional Ideas for An Anti-Oligarchic Republic’smerit lies in its intellectual energy that the readers will sense in every chapter, striving hard to melt an immense iceberg of systemic corruption.