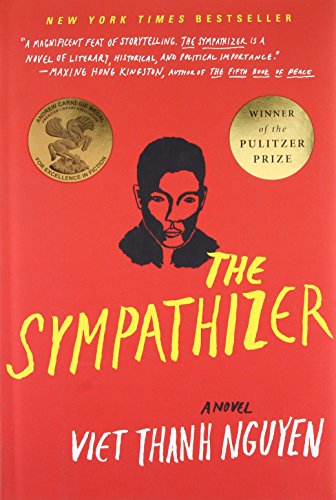 “The Sympathizer has much to recommend it. . . . a serious examination of the tenuous line between civilization and barbarism.”

The Sympathizer is a novel that grabs you by the lapels with its first lines. It begins: “I am a spy, a sleeper, a spook, a man of two faces. Perhaps not surprisingly, I am also a man of two minds.” The unnamed narrator, a mixed-race South Vietnamese soldier and Communist double agent, presents his story as a confession. He is closely related to Dostoevsky’s Underground Man and, in particular, Jean-Baptiste Clamence, the “judge-penitent” of Camus’ The Fall.

Let’s continue with the novel’s opening:

“I am not some misunderstood mutant from a comic book or a horror movie, although some have treated me as such. I am simply able to see any issue from both sides. Sometimes I flatter myself that this is a talent, and although it is admittedly one of a minor nature, it is perhaps also the sole talent I possess. At other times, when I reflect on how I cannot help but observe the world in such a fashion, I wonder if what I have should even be called talent. After all, a talent is something you use, not something that uses you.”

Regrettably, there isn’t sufficient space to quote at greater length, for Nguyen’s introduction is a tour de force of nuance and significant detail. His opening remarks offer a penetrating, if necessarily cloudy, portrait of the narrator, exploring the nature of his complex identity. The words “admit” and “confess” recur with some frequency, but the conditions of this confession are unclear. To whom is the narrator speaking? Where is he? Why has he chosen to reveal his secrets?

Nguyen’s narrator is a man who knows that his identity, like his ethnic heritage, is not monoform. It comprises a dense network of histories, loyalties, motives and beliefs. The inciting events, however, are dualistic. Us and Them. In both respects he is the progeny of Achebe’s people, who have inherited their author’s multi-continental education and, therefore, his ironic and embattled point of view.

Variously identified as American, illegitimate, natural child and, by his mother, love child, the narrator is uncertain who he really is. “I dreamed,” he says, “of trying to pull a mask off my face, only to realize that the mask was my face.” This double-consciousness brings understanding but also ambivalence and metaphysical entropy. “In the end, my father had it right. He called me nothing at all.”

The Sympathizer begins with the fall of Saigon in April 1975 as the main character is preparing to escape with the General, for whom he is a devoted amanuensis:

“Not everyone may have feared the end, but the General sensibly did. A thin man of excellent posture, he was a veteran campaigner whose many medals had been, in his case, genuinely earned. Although he possessed but nine fingers and eight toes, having lost three digits to bullets and shrapnel, only his family and confidants knew about the condition of his left foot.”

The General shares a bad foot with Oedipus, Abner Snopes, and Mrs. Breedlove just as Nguyen shares, with Achebe, a fondness for allusions to the Western literary canon. Nguyen’s description is, in the sense of Clifford Geertz’s field ethnography, “thick.” He lives among his characters and is accepted as an insider by them. He does not simply introduce and sketch characters, but rather inhabits and animates them.

Nguyen has a multiple-entry visa to Greeneland; this is neither cheaply said nor cheaply earned. Greene—like Salinger, Fitzgerald, Dickens, and Pynchon—is evoked by many critics for superficial or even whimsical reasons, but Nguyen is a true acolyte and successor. His description of the General continues:

“His ambitions had hardly ever been thwarted, except in his desire to procure an excellent bottle of Bourgogne and to drink it with companions who knew better than to put ice cubes in their wine. He was an epicurean and a Christian, in that order, a man of faith who believed in gastronomy and God; his wife and children; and the French and the Americans.”

Nguyen is a student of Greene not only because of his spare and precise writing, the world-weariness and existential stasis, the intrigue and foreign militants, not even because, like Greene, he limns the moral hinterlands where Christianity and the flesh meet geopolitical exigency. It is all of these things but, more intrinsically, the tone of his work, deeply embedded, both elegiac and pious, mourning the loss not only of his own innocence but of the original Fall.

After the fall of Saigon, the action moves to California, where the preempted war and double-agency continue. The General and his cohort are reduced to bit parts here, where they speak with the wrong accent and lack the relevant screen credits. The narrator is employed as a consultant on a Vietnam film. He seeks to correct Hollywood’s misrepresentation but, ever ambivalent, wonders whose propaganda machine he is ultimately serving.

The Sympathizer is often very funny. It’s not uncommon, in the text, to find a one-liner tucked into the creases between solemn or touching passages. “I took care to peruse the book’s cover, crowded with blurbs so breathless they might have been lifted from the transcript of a teenage girl’s fan club.” His wanton fraternization between the giddy and the fervent could prove dissonant or defamiliarizing, but Nguyen commutes between these disparate moods with panache.

He is also dexterous with metaphors, images, turns of phrase. When he writes that “amputees flapped empty sleeves like flightless birds,” for example, it feels like a throwaway, an off-the-cuff remark. The Sympathizer is drunk with such memorable passages and bon mots: “Besides my conscience, my liver was the most abused part of my body.” Despite the generally high caliber of Nguyen’s conceits, there are too many of them. Metaphors are, at times, so closely packed together that they fight for our attention. There’s little time to savor and digest one before another comes knocking, with a handful of pamphlets you don’t want to read.

Consider the following mouthful: “. . . Hollywood’s function as the launcher of the intercontinental ballistic missile of Americanization.” There are several problems here. First, the language is almost impressively inadequate, the prose inelegant and clunky. Nguyen has committed the ungainly musk ox of abusio. Second, the gripes about Hollywood, by this point in the novel, have grown as tedious and interminable as the Indochina conflict itself. Third, the metaphor is only one among nine in the paragraph. Rush hour on the Tokyo subway comes to mind.

There are also occasional slips, wherein Nguyen seems to deploy a phrase merely because it sounds pretty or might appear poignant. The narrator alludes to falling in love with a French nurse and, for her, “swallow[ing] the black tea of exile.” The meaning here seems confused or perhaps nonexistent. Black tea is neither unpleasant nor difficult to endure. In what way is it comparable to exile? Nguyen is a writer of many gifts but, perhaps because of this, has not yet learned to edit himself with the exacting, merciless discipline that’s required.

A recurring theme in The Sympathizer is how Asians and Asian Americans are perceived, by White America, as two-dimensional figurines rather than as complex, diverse individuals. This has been said before, many times, and probably does not need reassertion. Nguyen adds nothing original to the debate and, perhaps less forgivably, is himself quick to stereotype the Other.

A white professor tells the narrator: “You are a good student, as all Orientals are.” Undoubtedly, a professor has said something this at one time or another, but the line does not ring true. It feels forced, hackneyed, over-the-top. Nguyen may be striking out at White America as a corrective measure, to let them know what it feels like to be reduced to a simplistic category, but surely this is beneath his craft. He goes too readily for the easy mark, the cheap laugh, the emotional appeal to a readership that will, undeniably, enjoy hearing the mighty admonished.

Nguyen might rebut by suggesting that he is being ironic, or that his novel is a work of satire, but he falls back on this strategy too often and The Sympathizer is only satiric—if it is so at all—when it wants to be. Nguyen allows his voice and mode to shift—uneasily, often ineffectively—among satire, comedy of manners and realism. His profligate and acerbic thrusts at the White Man are often clumsy, implausible or trite.

Curiously, but not therefore surprisingly, directly after chastising Westerners, at length, for their misrepresentation of the Vietnamese, Nguyen alludes to “the young girls who rode their bicycles to and from school on those fluttering white ao dai, butterflies that every Western man dreamed of pinning to his collection.” There is some truth to this, but of course there’s some truth—but never enough—in every prejudicial statement.

The author is apotheosizing, in the above passage, the practice of racial stereotyping; his statement is lurid, damning and grossly oversimplified. It’s clear, with even a glancing attention to the passage and its context, that Nguyen cannot hide behind the veil of satire or functional error. Every Western man? Of course not. Imagine the uproar if a non-person-of-color were to make such a claim.

Language is also something of a problem. Nguyen’s non-native speakers use a perfectly fluent English without any suggestion that their Vietnamese thoughts and words have been rendered, for a foreign  audience, into English. Amy Tan does this quite well, with Chinese-to-English prose, as does Andrew Madigan, a new and rather unknown novelist (Khawlas’ Wall), with Arabic and Hindi.

The Sympathizer has much to recommend it. The novel is a serious examination of the tenuous line between civilization and barbarism. It’s a study of sin, guilt, expiation, loyalty, betrayal, right action, and moral disorder. However, it does not even begin to offer, as some contend, a new way of seeing Vietnam. The story is a good one—though it stagnates in the middle—but the history and its analysis are not groundbreaking or even novel. It’s a typical Revisionist account of the fall of Saigon and its aftermath.

Nguyen, despite great promise, has not yet learned to harness his talent or to exorcise the cultural and personal demons that might allow him to write with more objectivity, fairness, precision. The Sympathizer has Wordsworth’s powerful feelings, but they are not recollected in tranquility.