The Sword and the Shield: The Revolutionary Lives of Malcolm X and Martin Luther King Jr. 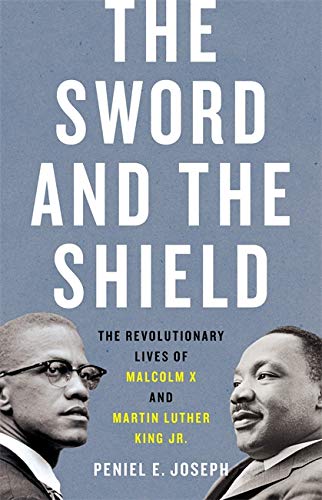 “The Sword and the Shield delivers both strong storytelling and exemplary history, dismantling popular distortions of its subjects, and arriving at a nuanced and profoundly revealing portrayal of converging visions that informed, challenged, and sharpened each other even as their proponents seemed publicly and irrevocably at odds.”

In By Any Means Necessary, Spike Lee's fascinating memoir of his struggle to fund and produce his epic Malcolm X biopic, Lee recalls the controversy sparked by the final images of his first masterpiece, Do the Right Thing (1989). The film ends with a black screen showing two crawling quotes, one from Martin Luther King, Jr. and the other from Malcolm X. Why, some viewers asked, would Lee make the confounding choice of concluding his movie by juxtaposing the patently contradictory messages of two diametrically opposed black leaders? Lee had only one comment: "Black viewers never asked me that."

On its own, Lee’s terse response wasn’t much of an explanation. But perhaps he felt, justifiably, that simply by making the movie he had explained enough. Was it so far-fetched that one person could draw inspiration or insight from both men’s words without favoring one and disavowing the other?

The late historian and theologian James H. Cone, author of the landmark Malcolm & Martin & America: A Dream or a Nightmare (1991), certainly saw no contradiction in absorbing essential elements of both preachers' messages and lives. Cone writes, "I am an African-American theologian whose perspective on the Christian religion was shaped by Martin King and whose black consciousness was defined by Malcolm X."

Having constructed his profoundly influential Christian Liberation Theology on a synthesis of the teachings of King and Malcolm X, Cone was uniquely positioned to take up the daunting task of writing a dual biography of the two preachers and Freedom Movement icons as something other than rivals fixed at philosophical antipodes. Malcolm X’s unflinching portrayal of the nightmare experienced by African Americans stood in sharp contrast to the dream of black and white together King espoused in his most famous speech. Cone makes the case for their commonalities quite powerfully, in part by acknowledging the profound flaws and oversimplifications inherent to our popular understandings of both men, and, in particular, the pervasive myopia that stunts King’s always-evolving views in one soaring moment.

The Sword and the Shield, a new dual biography of Martin Luther King and Malcolm X by University of Texas professor of history Dr. Peniel E. Joseph, goes even further than Cone in asserting that by the time of each man’s respective death, there remained little daylight between their viewpoints on racial injustice and how to address it.

“Framing them as simplistic dueling opposites obscures the ways in which each served as the alter ego of the other,” Joseph writes. “By the end of his life, Malcolm viewed himself as working in tandem with King, even when he disagreed with the civil rights leader’s tactics. And Malcolm’s swashbuckling internationalism, which included public criticism of the Vietnam War, offered a framework for King’s radical peace efforts three years later.”

Joseph convincingly argues that the two leaders’ overarching goals, however differently expressed, were inseparable, casting King as the 20th century’s most committed and successful crusader for African American citizenship, and Malcolm X as its most charismatic and perceptive champion of African American dignity.

On one level, it’s easy to see why misunderstandings persist. Selective memory remains a large part of it, particularly the sharp distinctions drawn between the “heroic” phase of the Freedom Movement (often reduced, as SNCC co-founder Julian Bond and others have said, to “Rosa sat down, Martin stood up, and the white kids came down and saved the day”) from the more controversial Black Power struggle.

Another inherent problem stems from the portrayal of the movement in its time. As Taylor Branch asserted in Parting the Waters (1988), even as Martin Luther King’s fame grew, he didn’t make headlines simply by giving speeches. Public outbursts of racial violence got more attention, but the amount of ink (if any) accorded to King in the national press was usually left to “the whim of white reporters.”

For Malcolm X, who began preaching in 1952, but was virtually unknown before he was featured in the 1959 TV documentary The Hate That Hate Produced, oblique or direct attacks on King, though far from central to his message, represented a surefire way to draw the attention of a mainstream media less responsive to the substantive messages of black freedom fighters than their perceived internecine disputes.

Malcolm X sometimes expressed his espousal of black self-defense in response to white supremacist attacks on the black community as a direct repudiation of Martin Luther King’s cautious, pragmatic approach and his Gandhian insistence on “loving your enemies.” Rather than acknowledging the reductive oversimplifications of King’s message advanced in the white press, throughout much of his 12 years as a public figure, Malcolm X often exploited them, variously referring to King as an “Uncle Tom,” a “House Negro,” and a “fool,” betraying African Americans with his excessively conciliatory relationship with the white power structure. And perhaps most famously he dismissed the carefully orchestrated and largely scripted event at which King delivered his “I Have a Dream” address as the “farce on Washington.”

Essential to Joseph’s argument in The Sword and the Shield is his careful debunking of not just the typically overstated conflicts between King and Malcolm X, but also the reductive images that distorted perceptions of them in their own time and dilute their messages today. “King’s access to senators and the president allowed critics, including Malcolm X, to identify him as a political insider captured by reformist impulses,” Joseph writes. “In truth, King’s conciliatory image masked the beating heart of a political radical who believed in social democracy, privately railed against economic injustice, and viewed nonviolence as a muscular and coercive tactic with world-changing potential.”

This “conciliatory image” also ignores the profound changes King’s views underwent in his last few years—changes that Joseph says accelerated in the winter of Malcolm X’s assassination. Freedom Movement historian Clayborne Carson has argued that King’s vision and mission were always broader than civil rights and integration, and that King’s redirected attention after Selma to northern ghettoes, his increasing focus on economic inequality and labor issues, and his opposition to the war in Vietnam that decimated his white support, were just as representative of that vision as his better remembered and more acclaimed struggles.

In fact, these often-unpopular efforts marked 1966-68 as King’s “most prophetic period,” affirming an evolving vision that only sharpened as bloody urban insurrections threw racial and economic injustice into sharper relief. By turning his attention to the destructive effects of America’s racial caste system beyond the Jim Crow South, Carson wrote, King “was returning to his deepest convictions as a social gospel minister after a decade-long detour into civil rights leadership.”

Joseph concurs: “The risk-taking King, who defied a sitting president to protest war, is missing from our popular memory. The revolutionary King, who marched shoulder to shoulder with garbage workers, locked arms with Black Power militants, and lived in Chicago ghettos in an effort to stimulate social change, is forgotten. The King who proclaimed that America’s greatness remained ‘the right to protest for right’ has all but vanished, replaced by generic platitudes about freedom and justice."

Joseph acknowledges similar challenges in arriving at an understanding of Malcolm X that considers all the multitudes he contained. In an earlier effort at collective biography, the sweeping and insightful Dark Days, Bright Nights: From Black Power to Barack Obama (2010), Joseph asserted that the definitive biography of Malcolm X hadn’t been written yet. 2011 brought the late Dr. Manning Marable’s magnificent Malcolm X: A Life of Reinvention, which, for all its controversial moments, provided as piercing, perceptive, and complete a portrait of Malcolm X as any biographer is likely to write. That said, one thing that’s refreshing about The Sword and the Shield is that as a predominantly political biography of Malcolm X and Martin Luther King, Joseph generally has no need to write about sex or plagiarism, and he largely steers clear of both.

But Joseph quite successfully navigates the inherent challenges of dealing with the political mythologies that muddy the waters of Malcolm X scholarship. These, as Marable, Joseph, and others have written, derive in equal measure from severe and deliberate distortions of the Muslim minister’s image in his lifetime, the “fast-developing hagiography” that sprang up in the black press after his death, the ambiguities of the posthumous Autobiography and the question of where Malcolm X’s intentions end and where his integrationist collaborator Alex Haley’s interventions begin, and the incontrovertible fact that Malcolm X was undergoing profound personal and political changes in the last months of his life that surely would have continued for some time to come. Moreover, despite his peerless analytical and rhetorical gifts, his ability to articulate and act upon those changes was severely hamstrung as he faced the unimaginable perils of life as a marked man.

The mythology that’s grown up around Malcolm X, Joseph succinctly states, has “cleaved him in two,” leaving us with the “bad Malcolm” of the Nation of Islam (NOI) who lambasted white devils, preached hate and violence, and worked to undermine the civil rights movement, and the “good Malcolm,” who, finally free of the NOI, returned from the Hajj an enlightened, Orthodox Muslim, committed to racial brotherhood, and eager to join the mainstream Freedom Movement. “Such neat juxtapositions,” Joseph writes, “made for good storytelling but poor history.”

The Sword and the Shield delivers both strong storytelling and exemplary history, dismantling popular distortions of its subjects, and arriving at a nuanced and profoundly revealing portrayal of converging visions that informed, challenged, and sharpened each other even as their proponents seemed publicly and irrevocably at odds.