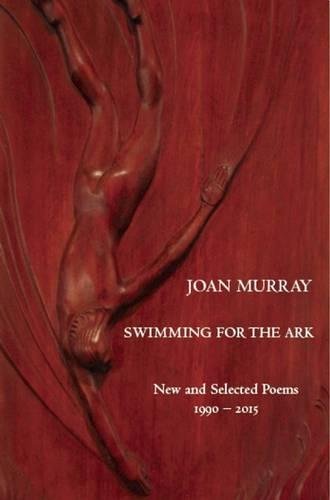 “I did not want to put this book down. Neither will you.”

There are many books of poetry out there today—the range is staggering—from simple lyrical collections to obscure works difficult for readers to access. Joan Murray’s new book, Swimming for the Ark: New and Selected Poems 1990–2015 hits neither of these poetic edges. What it does is lay out a collection of new and previously released poems that uncover the author’s masterful use of narrative and lyrical forms to bring out the taste, touch, feel, and memory of real life experience.

Released as a part of the White Pine Press Distinguished Poets Series, Murray’s manuscript opens with her latest works, none among them more illustrative of how a poet may use language to communicate the chewiness of daily life than the title poem of the book, “Swimming for the Ark.” The opening stanza lays a groundwork:

“Because the hurricane was coming, and because
he wasn’t there, and because his boat was moored
off the public beach, roped to an empty
Clorox jug with cinder blocks beneath,
my father told my mother to go and save it.”

It is the urgency of the event—the hurricane—that prompts the narrator to speak. But when she speaks, it is in the all-encompassing voice of a child. And it is precisely that voice and point of view that is so compelling. The narrator paints a strong picture within the lines of the next stanzas, reflecting how her father spoke with her mother every Wednesday “when we went by flashlight to the phone booth by / the juke box in the Sweet Shop / and pushed our way through the crush of / teenagers.”

The narrator, seeing through “ten-year-old eyes,” watched her mother sweat as the unheard conversation took place between mother and father. And when mother emerged with “we must save his boat,” the narrator’s next stanza opens with the judgment, “It wasn’t much of a boat.”

What becomes clear through the workings of this poem is the exposition of relationship, the viewing of life through the eyes of a ten-year-old girl, the near hopelessness she feels as she is separated from her mother, as she worries she will succumb to the waves and drown. But the author takes the poem to completion in an unexpected way and the reader feels that sense of bewilderment, the inexplicable cognition of a child, through the last two stanzas:

“I imagined she was
calling my name—not knowing where I
was and being afraid for me. I imagined she could see
how exhausted I was, how glad I was to

see her calling. But then I saw the look on her face,
and I knew she was yelling—yelling at me
to stop my playing. Yelling at me to get in right away
and help her drag his boat to the top of the beach
so she could go and call him and tell him what she’d done.”

Throughout her collected New Poems in the manuscript, Murray hits the reader with her best work, exemplary poems that bring the reader into the topics she shares, that reveal both macro and micro views. But readers are treated to much more in this book. It is filled with choice selections from Murray’s previous collections: The Same Water, Queen of the Mist, Looking for the Parade and Dancing on the Edge.

There is much a reviewer could say about these collections—how the author uses narrative to draw readers into her narrator’s view, how Murray uses lengthy, segmented poems to effect in The Same Water, how Queen of the Mist joins a collection of poems to tell the story of traveling over Niagara Falls in a barrel, how she deals with beauty and sorrow and daily routine in Looking for the Parade and Dancing on the Edge, but I think the reading of her poems will say much more.

Swimming for the Ark succeeds where many other books might otherwise fail—it draws the reader into an age, a view, a slice of life and it delivers substance through well-built structure and a careful choice of language. Once I cracked its covers, I did not want to put this book down. Neither will you.