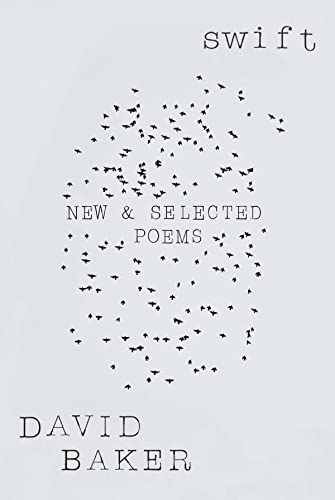 “Swift: New and Selected Poems reads like a poetic encyclopedia, a fusion of art, science, mathematics. David Baker grabs his audience with poems that are accurate yet creative, precise yet profound.”

David Baker is a master of places defined by science and art. His poems create human emotions through scientific, yet creative, placements in the natural world. Humans are placed in multisensory and scientific environments to create sentimental metaphors.

Swift: New and Selected Poems presents the reader with new poems and selections from his previous collections, dating back to 1985’s Haunts. All poems across all collections are carefully researched, as evidenced by precise images of trillium, deer, and heron, as if he were a botanist with an artistic spirit.

“The Osprey” embodies his poetic fusion of science and art. With the title as its first line, the first stanza reads “The Osprey // or sea-eagle, / what the guidebook says is / white, grayish brown, and “possessed of weak eye- / masks” in its nonmigratory island . . .” The poem then describes a gray bird attacking a fish in delicate blue water, thus juxtaposing harsh death and soothing color. Baker creates a sense of tranquility while viewing a cycle of natural preying.

Poets strive to create metaphors through arrangements of images. In “Monarchs Landing and Flying” Baker places a mourning woman crying while her lover, holding back tears, helps her into a taxi in a shower of dozens of “orange-yellow-black-wing-flecked monarchs,” thus placing beauty in a scene of remorse. This is again an example of Baker’s ability to fuse contrasting, multifaceted images to prove human emotions. He grants light to dark.

Baker has diverse poetics. His poems range from narrative stanzas to staggered line breaks. Some poems have one line per a page. “Scavenger Loop” carries stanzas, single lines, columns, italicized references, dashes, and gaps, to name a small list of his poetic styles. The poem even carries a mathematical formula. Baker’s poetry is nothing short of calculated and experimental.

Swift: New and Selected Poems reads like a poetic encyclopedia, a fusion of art, science, mathematics. David Baker grabs his audience with poems that are accurate yet creative, precise yet profound. He is a researcher’s poet whose poems demand dissection.