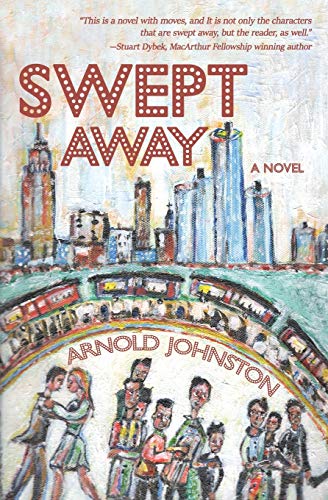 “Swept Away is a breezy trip into academia, a place where danger is present but manageable—as long as you pay attention to both your surroundings and your colleagues.”

Disgruntled academic Dennis McCutcheon wades through the woes of academic life, including the foibles of promotion, in this light-hearted mystery. The novel reads fast thanks to a brisk pace, witty dialogue, and bite-sized chapters.

At the novel’s opening, Dennis and his platonic friend Eileen brace themselves against the drudgeries of the establishment. They’re forced to play the game even when being snubbed by higher-ups. Dennis has the additional problem of being an odd duck: a playwright in an English Department: “neither English nor Theatre knows what to do with playwrights. Both departments prefer their writers dead—English because they don’t really think playwrights are writers, and Theatre because if they’re dead they don’t have to pay them royalties.” Johnston seems to speak from experience, and his complaints ring true.

Due to his unfortunate lack of publications, Dennis has learned that his tenure has been denied.  He is trying to reason out a solution when an unexpected blessing falls upon him. Colleagues at his former institution in Detroit want to produce his play Swept Away: “As an alumnus of Wayne State University, you and your work are known to us here in the Theatre Department. . . . We take great pleasure in asking that you allow us to mount your full-length play.” Dennis may not have published any books lately, but having a play produced will earn him the kudos he needs to advance in the department. He immediately gives the university permission to produce his work and prepares to visit even though that means shirking some of his regular professorial duties.

After considerable preparation, McCutcheon makes his way to Detroit, where the play is in the final stages of preparation. The rehearsals go surprisingly well. Dennis has many distractions, however. The most significant is his old flame, Andrea, who is now happily married to Larry.

While Dennis doesn’t mind the added pressure of juggling work with pleasure, things start to go wrong. His hotel room might be haunted. He senses that people tiptoe around him. He feels that he’s locked inside a joke he has no access to. Worse yet, the joke seems to be on him. Did Dean Fox sincerely want to put on his play, or did he have another purpose for bringing Dennis to Detroit? Why was Dennis really on the dean’s radar? Surely there’s a deeper explanation. Once Dennis is nearly murdered on his way home from a successful performance of the play, he knows he has good reason to be suspicious—and cautious.

Dennis isn’t sure how to act on his instincts, however, and the process is a mystery to him. Even his ex-wife, who causes trouble of her own, gets into the act by giving him a hard time. She calls and leaves a biting message: “Swept Away? Don’t make me laugh. You’ve never been swept away. You’re always too busy thinking when you should be doing. Probably doing when you should be thinking, too, but never swept away.” Dennis isn’t ready to take her criticism, though. Instead of replying, he deletes the message.

Johnston easily centers his narrative in academia. The nervous backbiting will ring true for members of nearly any college department. Though Johnston pokes fun at his characters’ insecurities and rude behavior, the tone is light-hearted. Even the narrator is called out by his friend: “Eileen laughed. ‘For a man who recently played El Gallo in The Fantastics, you seem to have lost your sense of adventure, buddy.’” The narrator learns to redevelop his sense of adventure, but when his enemies get serious, he’s smart enough to allow Eileen to help him.

Eileen is an especially delightful character who serves as both a foil and an opportunity for extended humor. Once she zeroes in on a suspicious character, she holds nothing back: “’I’d like to slap that woman to sleep and then slap her for sleepin.’ She’s slipperier than a Mississippi sturgeon. She’s obviously figured out something’s up and she’s trying to play both ends against the middle. She’ll take whoever comes out on top. So to speak.” Eileen’s fresh analogies brighten her observations and serve as a contrast to the narrator and his drier point of view.

Johnston has fun with the vivid setting. The narrator paints such a bleak picture of Detroit as being dangerous that upon first glance, we are swept in ourselves: “Now, as I neared my destination, sunlight broke through the fall overcast of dirty-looking clouds that hung overhead. Dirty clouds, dirty city: what everyone expected when entering the nation’s model for urban blight and fiscal hopelessness.” We—and Dennis—assume that a mugging is an unimportant, everyday occurrence. It takes Dennis’s do-it-yourself investigation to look deeper into his bad luck and to uncover the true source of his trouble.

The narrator’s play is a useful part of the plot, and Johnston includes enough dialog for us to get a sense of his character’s skill as a playwright. This adds a layer of complexity to the narrative and allows Johnston the opportunity to emphasize his theme of being swept away in many different ways. Swept Away is a breezy trip into academia, a place where danger is present but manageable—as long as you pay attention to both your surroundings and your colleagues.