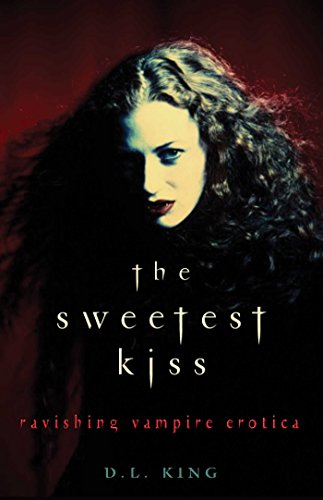 Vampires are hot. Looking at recent incarnations of them in movies or on television might lead a reader to think this was a new craze. Not true. Vampires have been capturing the imaginations of people for centuries. What is required to get noticed by readers is some new twist or reversal of the tried and true that has always kept the living undead on our collective minds.

The Sweetest Kiss: Ravishing Vampire Erotica collects nineteen stories that do both. Some retell the tried and true of the romantic vampire who sweeps women off their feet with a smoldering look and makes men do their bidding with a few corrupting words. The twist with these stories is that the vampire may not always be male and the victim may not always be female—even if the majority of these stories are heterosexual in orientation.

All of these stories are well written with engaging characters that capture the imagination from at least the second page, build up to an interesting climax (pun intended), and then resolve the conflict in some fashion that makes sense for that particular story.

Most of these tales are told through the third-person perspective, a common practice that is easily understood by almost every reader. Some are told in the first-person, such as Remittance Girl’s “Midnight at Sheremetyevo” that reveals the rules for a vamipiric family; or Sommer Marsden’s “The Student,” which combines the latest ghost hunting craze with the living undead. Other stand-out stories told in the first-person include Ciara Finn’s “Advantage,” in which a mortal consciously fights her survival instincts for the thrill of her monstrous lover; while “Devouring Heart” is a tale of love’s sacrifices written by Andrea Dale.

In general, vampires embody the powerful seducer who cannot be resisted, but this trope is inverted several times in this anthology. “Red by Any Other Name” from Kathleen Bradlean wonderfully inverts the normal paradigm, while “Enlightenment” from Amber Hipple gives us a victim who is more the hunter. Maxim Jakubowski’s “The Communion of Blood and Semen” exposes the fragile vampire who is increasingly common in some teen literature, but adds to this a realistic sense of suffering and addiction that a mortal lover must control. Hunting for vampires takes on a desperate edge in a perfectly mundane setting in “Turn” from Nikki Magennis, but as good as the story is, it is the weakest in the collection since the plot seems to move a bit too quickly for the reader to firmly grasp the nuances in the main character’s viewpoint.

If you like your vampires to be the ones in control, you won’t be dissatisfied with several of these stories. “Fourth World” by Lisabet Sarai comprises a clash of cultures that result in orgasmic horror, while G. B. Kensington’s “Fair Play” gives us a vampire with a dark sense of humor about his latest meal. A true romantic lady of the night enjoys her evening in “Nightlife” from Madeleine Oh. An entire cult is created in Michelle Belanger’s “Wicked Kisses,” though the erotic edge here is more removed from vampires than in any other story in this collection. And we even have heroic vampires in Kristina Wright’s story “Cutter,” in which a young woman is given more than she can acquire on her own. And A. D. R. Forte, in “Once An Addict,” reveals a vampire who might see herself as more dealer than savior.

Given a vampire’s potentially eternal life, authors can be free to set them during any time period. While none of these stories go into the science fiction realm, a few take us back to earlier periods. Anna Black’s “The Temptation of Mlle. Marielle Doucette” takes corruption to a deeper level during the Reign of Terror. Post World War I fear competes with overwhelming sorrow in Teresa Noelle Roberts’ “Blood and Bootleg.” And why wallow in the past when you can embrace the latest in technology in Evan Mora’s wily hunter in “Takeout or Delivery?”?

This reviewer’s favorite story in the collection is “Wait Until Dark, Montresor” from Thomas S. Roche, a widely published erotica author who not only gives us the unusual vampire and the mortal seeking her pleasures, but does it all in a second-person voice that pulls you into the story. The runner-up for the best in this anthology is a wonderfully dark twist on Dracula in Lisette Ashton’s “Kiss and Make Up,” in which the victim isn’t one of us mere mortals.

It is rare to review an anthology that has such good writing throughout. Cleis Press has done an excellent job of sorting through the plethora of vampire erotica tales being written today and has produced a book well worth reading. With an array of characters that go beyond the common stereotypes for the undead and an even greater variety among the mortals who encounter them, this reviewer feels confident that everyone who likes erotica or vampires will find something to enjoy in this collection.