The Sweet Taste of Muscadines: A Novel 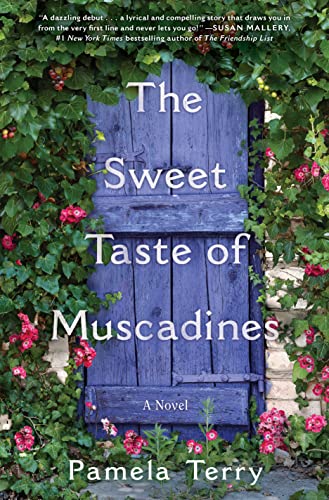 “Lovely, lyrical, and often profound, The Sweet Taste of Muscadines is women’s fiction at its finest and then something more. . . . the search for truth on the backdrops of Wesleyan and a remote island off the coast of Scotland is breathtakingly visceral, in an emotionally evocative story with a strong sense of place.”

Southern tradition, cultural nuance, and unresolved childhood memories lie at the foundation of this engaging story, which begins with a Southern funeral. Narrator Lila Breedlove is a transplanted Southerner now living as a young widow on Wigeon Island, off the coast of Maine. A graduate of the Rhode Island School of Design, she lives quietly and successfully seaside, designing and creating woven garments, an occupation metaphoric of The Sweet Taste of Muscadines’ intricately woven tale.

In an intimate, first-person voice as confessional as a private journal, author Pamela Terry lulls the reader with descriptive passages both atmospheric and introspective in such a subtextual manner as to significantly assist a story built on a family dynamic predicated on secrets forcing their way to the light. Though long happy in Maine, Lila Breedlove says of the South: “The roots of its influence still run through me like vines, entwining memories and creeping under the doors of my dreams.”

The sudden death of her cool, distant mother calls Lila home to Wesleyan, South Carolina, where she’s reunited with younger siblings, Henry, her beloved brother, and Abigail, the doting sister who remained tied to their mother’s side. Lila muses, “It’s never wise to wonder if you’d be friends with your family were you not bound together by blood.” In the case of Henry, “There was no one on earth I’d rather be with than my brother.” In the case of the emotionally erratic Abigail, it’s another story, and although the sisters have culled disparate lives, a bond remains from familial loyalty.

Because matriarch Geneva Burns is found dead with a spoon in her hand in the family’s Wesleyan muscadine arbor, the question raised as to why she was found in this location begins the unearthing of the family’s well-kept secret, which startlingly redefines their understanding of what happened to their presumedly deceased father, when it becomes clear the siblings have lived with a lie.

When a stack of buried letters is found in the muscadine arbor, Lila and Henry follow a trail that unfolds like a scavenger hunt and wheels are set in motion for a journey to Scotland in search of their father, who, it comes to light, lives in the shadow of Ben Mathan on the remote isle of Eynhallow and hides a shameful secret.

Lila feels betrayed as she considers her father’s abandonment, but Henry has the same frame of reference as their father and understands his choice in the face of such a dilemma. With odds against them and not much to go on in locating their father, Lila wrestles with her anger but Henry plans to let him off the hook and says, “I know some of what he must have felt at the time, Lila. I can’t begin to imagine the pain he was in back then.”

Lovely, lyrical, and often profound, The Sweet Taste of Muscadines is women’s fiction at its finest and then something more. Written in two parts while weaving familial loyalty with the meaning of home, the search for truth on the backdrops of Wesleyan and a remote island off the coast of Scotland is breathtakingly visceral, in an emotionally evocative story with a strong sense of place. Deep-seated fear pertaining to keeping up appearances in the face of societal judgement against homosexuality, Terry writes with a warm-hearted, equitable hand.

There are no loose threads in The Sweet Taste of Muscadines’ rich fabric. A sonorous look at “the past we take with us, along with new understanding and the seeds of forgiveness,” it’s a satisfying, heart and soul read with resonance, sure to make you a fan of author Pamela Terry.