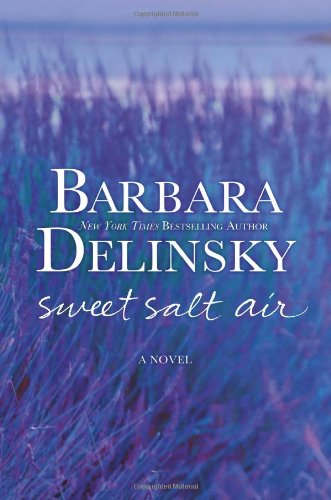 “With grace and dignity Sweet Salt Air reveals the fragility of human nature while intimating at the healing powers of forgiveness.”

Barbara Delinsky’s flair for addressing emotional dilemmas as well as her illustrative portrayals of the New England locality once again captivates in Sweet Salt Air, the story of friends who reunite on Quinnipeague Island off the coast of Maine.

From age eight, Nicole Lilly invited Charlotte Evans to spend the summer with her at her family’s vacation home. For 16 years, the two were best friends until they drifted apart after Nicole’s wedding to Julian Carlysle. As Nicole began a new life of wedded bliss, Charlotte’s career as a travel journalist commenced, taking her to exotic locales, giving her a nomadic lifestyle.

Now, ten years later, Nicole returns to the island after her father’s recent passing. Her mother, not able to return to the place that once held much joy, asks Nicole to clean the house and dispose of her dad’s belongings with the plan to sell the property.

Nicole, who works as a food blogger, lives in Philadelphia with her husband, a distinguished pediatric surgeon. She receives an assignment to write a cookbook sharing recipes of the different dishes indigenous to Quinnipeague. Julian, diagnosed with MS four years ago, urges her to go, though she is afraid to leave him because of his illness.

Charlotte is surprised when Nicole contacts her requesting her to help by interviewing the townsfolk and detailing the distinctive features of the area. It is somewhat incongruous that Nicole would still consider Charlotte her best friend, seeing Charlotte distanced herself due to a guilty conscience from a past misdeed.

An excerpt has Julian intoning, “You haven’t seen each other for ten years. You have different lives now. If you want to lure her back to recapture what you once had, you may be in for a fall,” and Nicole’s comment of, “I miss her,” may cause speculation as to how a reunion after such a long period can be expected to pick up where it left off. It’s as if the author is romanticizing the notion of female friendship as opposed to the one depicted.

Charlotte, hesitant to accept, misses Nicole even knowing she has kept a long-held and painful secret from her. She cannot decide whether to tell her or dismiss it, though now the need to ’fess up gnaws at her conscience.

Upon arriving on the island, Charlotte is aware Nicole is no longer the person she once was, and she learns Nicole, too, is surreptitious regarding her own life. The secrets withheld may very well destroy the women’s friendship and possibly cause an end to Nicole’s already crumbling marriage. On the other hand, revealing them could be an answer to a prayer and the opportunity for Charlotte to resolve her shame.

Each woman’s point of view is well developed, differently depicting their sorrows, despair, remorse, and disgrace. By unveiling the intricacies of the minds and souls of Charlotte and Nicole and the anguish and guilt that inextricably binds them together Ms. Delinsky creates a mostly plausible storyline.

The depiction of this tiny fictitious island with a varied and outstanding populace is well contextualized, as the author evokes the senses with sights, scents, and sounds such as: “Today, there was just the smell of sunscreen and surf, hours without awareness of time, and when the sun was at its highest and warmest, crab cakes on buns, topped with Dorey’s special tartar sauce.”

With grace and dignity Sweet Salt Air reveals the fragility of human nature while intimating at the healing powers of forgiveness.