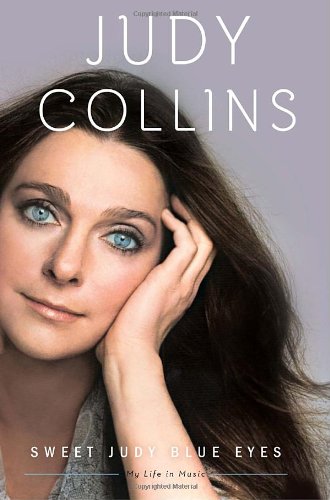 “Those seeking a history of the music of the 1960s and those who made it, a somewhat gossipy account of what Joni Mitchell referred to as ‘the refuge of the road,’ will find much to admire and enjoy here, as Judy Collins rather skillfully evokes the era and her place in it. Those who are seeking the story of her own life, her struggles with alcoholism, the loss of her marriage and her child, will be less satisfied.”

There is a touching moment early on in the pages of Judy Collins’ new memoir, Sweet Judy Blue Eyes, in which Collins and singer Janis Joplin have a brief conversation in the Los Angeles nightclub The Troubadour.

It is the spring of 1968. Both are there to listen to singer Paul Williams perform. As he finishes the song “Rainy Days and Mondays,” Joplin comes over to Judy Collins’ table: “Janis pulled her chair closer to mine. Her already famous face was a little puffy and her eyes gleamed from under tired-looking lids, but her energy attracted glances and attention to our table.”

“’I’m coming to hear you sing tomorrow!’ she said. I responded, hoping she could hear me over the noise that I was looking forward to my gig. As Paul left the stage and the room quieted down, Janis leaned across the table, speaking softly, intimately, into my ear.

“Janis’ words have haunted me for more than four decades. I have never known what to make of them.”

Perhaps it is simply the potent presence of Janis Joplin, an icon of brilliance and self-destruction from our conjoined youth or perhaps it is the simple brushstrokes with which Collins paints her image, but the moment resonates—especially when the reader’s eyes move on to what follows:

“Janis and I laughed awkwardly then, strangely embarrassed, both of us, by the intimations of fate and the echoes of the early deaths of many artists. Janis’s drinking and drugging seemed all of a piece with her dramatic, in-your-face lifestyle and persona. Her audiences expected her to behave badly, to live out there on the edge. They took all she gave them and seemed to protect her with their screams, with their outsized enthusiasm, with their passionate, loud approval.

“The truth was, of course, that I was as close to the edge as Janis, but in the eyes of the public, I was the girl with wildflowers in her hair, and some said, a voice like a mountain stream. Janis was expected to fly too high and crash. I was expected to be the flower-child folksinger who might soar but would come softly to my feet in golden fields.”

Sweet Judy Blue Eyes, in other words, illustrates what happens when golden expectations and reality collide.

While the purpose of the book is to, as the subtitle promises, present Ms. Collins’ whole “life in music,” the focus here is the beginning of her career, with the bulk of the book spent relaying the growth of the folk and folk-rock movement in the late 1950s and early 1960s.

The locale is, at first, very much New York, especially Greenwich Village, wherein Ms. Collins relives the creation and heyday of such legendary clubs as the Village Gate and the Bitter End.

These were heady times, and the memories of them are vibrant on the page, especially once the reader comes to accept the archly romantic, somewhat purple prose with which Ms. Collins writes.

Still, the pages are filled with stories involving the great and near great of the day: Phil Ochs, Tom Paxton, Pete Seeger, Mary Travers, Joan Baez, Richard and Mimi Farina, Graham Nash, Tim Buckley—all names to conjure with—appear again and again in these pages. Record labels such as Vanguard, Asylum, and Elektra give creative homes to these artists and structure to their work. And there is this gold nugget, an excerpt from Collin’s journal, written after seeing a new performer in concert at New York’s Town Hall:

“It was quite an experience; suffice it to say that this boy is not by any stretch of the imagination an entertainer, but he sings songs that he has written, with almost no voice, playing the simplest of chords, not looking so great in his dusty jeans and leather shirt, with a rig on his neck to hold the harmonicas he plays, and all the while looking something like a dancing bear. . . .”

Later, of course, Judy Collins would, like millions of others, come to recognize the brilliance of Bob Dylan. She shares another memory of him a little later—of a time when they were both houseguests at Albert Grossmans’ “rambling stone mansion” in Woodstock:

“About three in the morning I was awakened by the sound of Dylan’s voice—which by then I knew well—drifting up the stone stairs outside my bedroom. I opened my door and, dressed in my best terry-cloth bathrobe, crept down the stairs to listen. I heard Dylan’s voice coming from a room at the bottom of the stairs, seducing and captivating as he sang, over and over, the lyrics and newly found melody to ‘Mr. Tambourine Man.’”

The other home for the music of the era was Los Angeles and the houses in Laurel Canyon that housed the great talents, whose music echoed high and low throughout the canyon. Here, singer/songwriter Joni Mitchell was the guide to a new era, a new music, just as Dylan had been in New York.

Here Judy Collins writes, not of meeting her, but of hearing her sing for the first time, over a telephone, late at night:

“After Joni sang me ‘Both Sides Now,’ I put the phone down and wept. I never heard a song that I felt was so beautiful, and it would change both our lives.

“The next day . . . I heard Joni play the song again. It was still magic, and as her blond hair hung over the guitar as she sand, I wept once more, as I would went I heard many of her songs. She was a muse to me in many ways: her great beauty, the light in her eyes, the sadness I felt in her soul. We all felt that, those of us who fell in love with Joni’s music.”

Ms. Collins goes on to say, about Joni Mitchell, “I thought we were friends,” but then suddenly evades the issue, and abruptly moves on, never telling the whole story, never fully explaining. She says similar things about others: her first husband, several lovers, even her own child, always with more gaps than information.

Those seeking a history of the music of the 1960s and those who made it, a somewhat gossipy account of what Joni Mitchell referred to as “the refuge of the road,” will find much to admire and enjoy here, as Judy Collins rather skillfully evokes the era and her place in it.

Those who are seeking the story of her own life, her struggles with alcoholism, the loss of her marriage and her child, will be less satisfied. Judy Blue Eyes reads as if there were things that the author simply could not bear to fully commit to paper. Thus, something of a dance takes place, as Ms. Collins bobs, weaves, and ducks in order to avoid full disclosure.

Ah, but then there is the story behind the title of the book itself and of Ms. Collin’s relationship with one of the great loves of her life, if not the greatest, Steven Stills, guitarist and singer with Crosby, Stills and Nash. It is this relationship that forms the emotional core of the book, and the song “Suite: Judy Blue Eyes” that gives the memoir its soundtrack:

“’Suite: Judy Blue Eyes’ is playing on the radio, softly, but I hear it through the steady sound of rain and the hiss of the tires on the road. Unmistakable, Stephen Stills’s voice floats above the harmonies of David Crosby and Graham Nash. Stephen’s guitar cuts into my heart like an emotional arrow. Whenever I hear the song—in a grocery store, in an airport, on my own CD player—it . . . pierces the heart of this girl and all other grown-ups girls who think it tells their story. All great songs make you feel that way, as though they were written especially for you.

“But ‘Suite: Judy Blue Eyes’ really is my story. Stephen wrote it for me when we were both young and innocent, during our brilliant romance . . .”

It is this memory upon which the memoir turns. Unlike so many other stories of relationships gone, it is completely realized and beautifully told, the memory a love that obviously brings up warmth in reliving, not pain.

Later, Judy Collins relates a particular birthday of hers, and the gift of an antique guitar and of the song on which it was played. This moment of perfect memory and her emotionally charged writing is Ms. Collins’ particular gift to us. We should all have something so good to remember and relate.