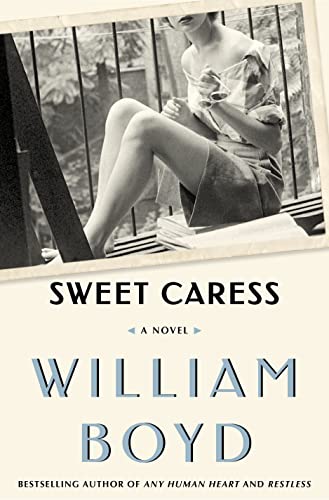 “It’s not a bad little novel, by most reckonings, but from William Boyd it’s a disappointment.”

William Boyd is one of England’s greatest living novelists, but not on the strength of Sweet Caress. His latest novel is occasionally rather gripping but, for the most part, loiters in mediocrity. The best that can be said is that it’s not, like Solo (2013), another work of Bond fan fiction.

Sweet Caress is the story—or stories: we’ll return to this—of Amory Clay, a photographer who lived through most of the 20th century and was molded, in large part, by its wars. More specifically, her personality was shaped by her father’s damage in World War I, her husband’s hidden shame in World War II, her own experience in Vietnam, the ideological battles at home, and the relentless conflagration of family and illness.

Boyd’s work is a Novel of Apprenticeship, but the bildung is not only Amory’s. It also belongs to the Age. Sweet Caress concerns the growth and education of Amory and her century. It comprises a potted history of the times and places that were critical to her, and its, development. A nice gimmick. The problem—and it’s a significant one—is that Boyd has performed this trick before, in both The New Confessions (1987) and Any Human Heart (2002). The plot of each book is largely different, but the structure is identical. A related problem is that the trick has not only grown stale but has been executed, in the present instance, with less skill.

Let’s examine this recurring gimmick more closely. In The New Confessions, Any Human Heart, and now

Sweet Caress, Boyd presents us with an extraordinary, if also quite compelling, character who lives a

long life filled with intense conflict, constant reversals and abrupt changes in fortune. Moreover, this character’s life is divided into a series of distinct and discrete micro-lives. Boyd is pursuing the idea, via a fictive character and milieu, that a full human life is actually a compendium of smaller units. Each is as unique and separate as the stages of a caterpillar’s existence: egg, larva, pupa, butterfly.

The most engaging aspect of this device is that the character—while in no way two-dimensional or stock—is a representative of his or her age, moving from one country to another—wherever the action is—changing careers, getting married and divorced, experiencing the great wars and cultural events. Boyd’s protagonist, in each of these three novels, is perpetually twinning the zeitgeist, an Haute Forrest Gump. Sometimes this works well—Any Human Heart is riveting and deeply moving—but in Sweet Caress seems like a mere novelty, a joke repeated too often that was perhaps not terribly funny the first time.

Boyd uses a second gimmick. Amory Clay is a photographer so the text is peppered with “her” work. Presumably this strategy is meant—like placing her at historical events and the use of “explanatory” footnotes—to add a texture of realism and substance to the novel, to make it seem more real because we’re confronted with evidence of the fictive character’s putative life. In practice, however, these devices are clumsy and only serve to shatter the aesthetic distance—the reader is pushed away from accepting the narrative, however temporarily, as real. The pictures themselves are nothing special. Perhaps the trick would have worked better if they’d been chosen with more judgment. They’re also quite vague and fuzzy, like a poorly mimeographed fanzine. The overall effect is amateur and slightly desperate, as if Boyd were aware that he’s repeating himself and is ready to exploit whatever snazzy ideas his publicist and public relators can dream up.

Sweet Caress begins in 1908 and ends in 1983 with periodic interludes in 1977. The central narrative is, on the whole, vivid and entertaining, but the brief 1977 sections are quite dull and only serve to disrupt our engagement with the story. Once again, it seems as if these interludes are a red herring, an unnecessary and irrelevant device meant to distract us from the realization that Boyd’s work is uninspired and desultory.

Boyd’s characters also tend to speak in syntactically unlikely manners. In 1977 Amory says, “There are no photographs more boring than photographs of animals—discuss.” This “discuss” was not in common usage until 20 years later, and, even then, not among persons of Amory’s age or background. This style, moreover, is inconsistent with how she speaks throughout the rest of the novel. Amory, born during the Edwardian age, normally speaks in more formal, old-fashioned constructions. Boyd has trouble, throughout Sweet Caress, aligning character with voice and action with the appropriate time period.

There are many things to recommend Boyd’s latest effort but plausibility is not one of them. Amory’s father tries to murder her, she tries to sleep with her gay uncle, female sex workers throw themselves at her in Berlin, she’s beaten by fascists in the streets of London, she accidentally uncovers a Top Secret mission in Vietnam, and that only scratches the surface. Sweet Caress is presented as a work of realism yet the plotting would make a teen dystopia blush. It’s not a bad little novel, by most reckonings, but from William Boyd it’s a disappointment.