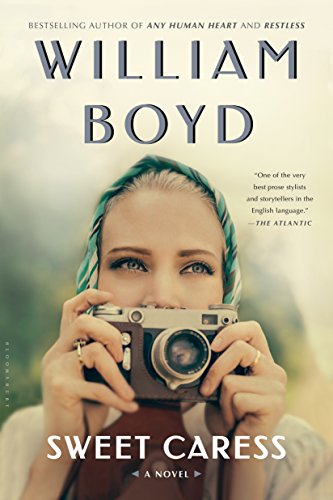 One would think that with all the international settings, romantic affairs, wars, lovers, and change of circumstance that accost the main character of Sweet Caress it would be a dynamic, involving, compelling story; but alas, it is not.

This book gets off to a tepid start, written in the first person, and develops the characters very slowly. The protagonist, Amory Clay is a woman born in 1908 into a middle-class English family. Early on it becomes clear that her father, given to eccentricities, is a walking casualty of World War I. Her uncle, Greville, is a society photographer who takes her under his wing and inspires her to be a professional photographer. Her career is off to a good start when she commits a society faux pas that forces her to take up her fledgling career on the continent, in Berlin, in 1930.

Boyd uses a diary-like method, the Barrandale Journal 1977, that is being written by the protagonist to reminisce over the past six decades. The journal is inserted into chapters under separate headings. Journals and letters are old devices in literature such as in Mary Shelley’s Frankenstein or Bram Stoker’s Dracula. In those novels the letters written to and from various characters fill in the backstory, enrich the characters, and further the plot. Boyd uses the Barrandale Journal so frequently in the novel that it is interruptive and breaks the flow by flipping back and forth through time. The problem is that the switch is often so uneventful and seamless as to be confusing, and detracts from the importance of what is actually happening and when.

In the hands of a different author like John Irving (The Cider House Rules, The World According to Garp) or Michael Chabon (Wonder Boys), who can create compelling characters, Sweet Caress might have been an amazing life’s story filled with heartfelt adventure and insight into historical context. As it is, the story, although episodic, is much less than compelling. This is because the main character, Amory Clay, who despite living on two different continents, being involved in international affairs, a war photojournalist in World War II and Vietnam, the wife of a Scottish Lord, and having her father attempt to kill her when a young woman—still remains essentially unchanged and untouched for most of the book. There is drama all around her, and yet she never feels life deeply.

The story, very Dickens-like, begins on the day of her birth and proceeds from there. Yet despite the Dickensian start and a very good plot to boot, the story is told in a matter of fact, boring manner. One would think that having the advantage of writing in the first person would extend great potential for Clay to express her thoughts regarding other characters, and then be jarringly wrong or otherwise, and add engaging dynamics to the storytelling. But again, it all comes back to character. If characters do not grow or change instead remaining the same despite their circumstances, they will not be compelling.

Although Amory Clay acts to a great degree as if she is a disembodied observer witnessing her own life, she finally does give voice to many of her regrets and deep tumultuous feelings in the last 100 pages of the book. Unfortunately, it comes a bit too late in the 450-page novel.

There are many photos in the book supposedly taken by Clay in the story. Clay is a woman who makes her living from photography, and yet none of the photographs shown leave you astonished or impressed to a degree that you are desirous to see more. In fact, except for the Vietnam shots they all look like mediocre snapshots from a family album. And perhaps that is the nature of the tale. That what should have been a deeply felt life in hindsight is one full of half-measures and regrets.