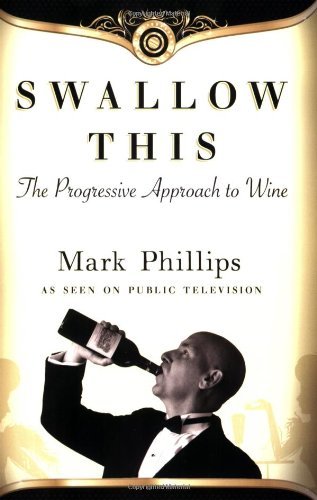 The cover gives a sense that Swallow This is going to be different: A totally bald guy in a tuxedo is chugging straight from a bottle of Château Lafite. Sure enough, the book is different. Mark Phillips presents his own opinionated view of how to enjoy wine, and there is a lot about his opinions to agree with. Swallow This is a fun, quick (not a lot of words per page) read that will give wine drinkers a useful way to evaluate wine, and provides a number of other useful tips along the way.

By his own telling, Phillips came late to wine, but when he did he became fanatical about it. Right away, before he knew much about wine, he founded the Wine Tasting Association in Washington, DC, and began learning along with the members of his association. He must have been an early adopter, because he managed to score the URL www.winetasting.org.

Also by his own telling, he was something of a prodigy wine taster. Early on, he could tell that a Chassagne-Montrachet was not quite right, when all the experts around him did not notice. In the first wine course he took, he correctly guessed that a wine was a Sauvignon Blanc when nobody else guessed it. Perhaps he has the palate of Rajat Parr, who, in Secrets of the Sommeliers reviewed in this Journal, recounts the instances in which he absolutely nailed wines blind tasted. Perhaps they both strongly remember the times when they got it right, forgetting the times they completely whiffed it.

Phillips sets up a villain—members of the Club, who follow the Traditional Approach (as opposed to Phillips’ Progressive Approach). The Club, Phillips says, was started in England, and transferred over to America as we became interested in wine. Phillips says it has two key tenets: (1) knowledge of a lot of mundane stuff like soil composition, what kind of oak is used, etc., and (2) authority, exemplified by Robert Parker and Wine Spectator. The first tenet is probably true, but a good number of Club members pride themselves on ignoring authority. Phillips walks along a difficult line, arguing that wine drinkers should not pay attention to experts, while giving plenty of advice on what he says we should do.

Thus, Phillips has the obligatory chapter early in the book saying There is No Such Thing as Bad Wine (although the headers on the pages of this chapter say There is No Such Thing as Good Wine), and if you like the wine, who cares what others think. But then in the extended chapter on the World’s Wine Regions, he proceeds to tell you which wines are good and which should be forgotten.

For instance, in talking about red wines from Chinon, in the French Loire, he says “[i]t’s kind of wimpy, and usually not worth the money,” so for Loire wines, “[s]kip the reds and buy Sancerre and Pouilly Fumé.”

He also completely dismisses Italian white wines, ignoring the extraordinary progress that Italian white wines have made and all of the interesting Friulanis, Vermentinos, and Greco di Tufos, not to mention proprietary blends, available. Following Phillips’ earlier admonition, pay no attention to what Phillips says is not good, and try them out to see whether you like them. The chapters on grape varieties and wine regions are a start, but anyone interested in learning more should immediately proceed on to other books on these topics.

The most valuable sections of Swallow This for the average person interested in wine debunk the value of point ratings (such as Wine Spectator giving a wine 90 points), and provide a good way to taste and evaluate wine. Phillips focuses in on a key insight: wine descriptions by Club members are not particularly helpful. This is a point discussed in the review of Joseph Bastianich’s Grandi Vini in this Journal, where it was pointed out that different writers’ descriptions of the same wine were different to the point that one could not tell they were writing about the same wine, and that it may be more useful to write about levels of acid, body, tannin, and the like.

Phillips boils useful wine description down to three factors: complexity, body, and style, or CBS. Once a wine drinker has these concepts down, if all wine descriptions were written this way it would be much easier to guess in advance whether that wine on the shelf in the shop will be enjoyable.

Phillips delights in recounting instances in which members of the Club could not tell when a wine was flawed, or tell which wine was expensive and which was cheap, which is probably useful for the average wine drinker in not feeling intimidated around Club members. They may pretend to know more than they do. In the review of The Great Domaines of Burgundy in this Journal, a book written by Club members if there ever were any, it was wondered whether the authors, who write about the distinctions between wines made from adjacent vineyards, could tell in a blind tasting which wine was a California Chardonnay and which was a White Burgundy.

Phillips’ love of wine and general disdain for authority is highlighted in the fun section on which wines he prefers to drink while engaged in various activities. While he does not mention driving a car or operating heavy machinery, he does drink wine while riding a lawn mower and while using a circular saw. He sneaks wine into the Kennedy Center, into the theater, and into the movies (Champagne and popcorn!). He drinks wine while going to the doctor, bike riding, reading, snow skiing, and walking the dogs. If he really drinks wine while doing most activities, he must go through life thoroughly marinated.

Swallow This is a useful book for those who feel intimidated by self-styled wine experts and who are inclined to slavishly follow point scores, helping them become more comfortable with the wines they like.

It is also a useful book for learning to evaluate and describe wine at a level that will work well for the vast majority of wine drinkers. That alone is worth reading the book.