Suspect Freedoms: The Racial and Sexual Politics of Cubanidad in New York, 1823–1957 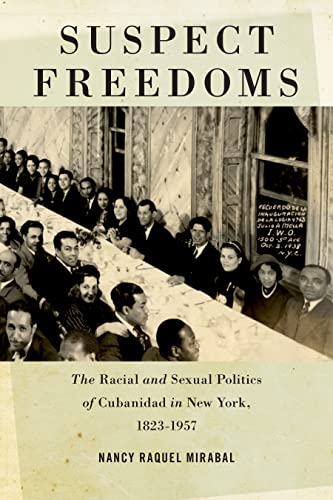 Jules Dassin’s classic film noir of New York, The Naked City, was released in 1948. It’s a police investigation of a young woman’s murder and, after the two perpetrators pay for their crime, the camera pans to shots of city streets and the skyline. A voiceover narrator intones these now-famous lines: "There are eight million stories in the naked city. This has been one of them."

Nancy Raquel Mirabal’s Suspect Freedoms: The Racial and Sexual Politics of Cubanidad in New York, 1823–1957 is one these stories, of those she calls “the Cuban diaspora.” Through an enormous amount of scholarly research, she traces the lives of generations Cubans who settled in the city as well as those who saw it as a valuable waystation to one day returning to their homeland. She places the lives of these Cubans, especially political radicals, against the defining issues of Cuba’s national identity, it’s independence from Spain, its relation to the U.S. and—after a couple of failed attempts—the victorious 1959 revolution.

Mirabal’s remarkable contribution—her labor of love—is found in the profiles she presents, some accompanied by photos. Many of the people profiled are historical figures (e.g., José Martí and Antonio Maceo), but most are ordinary Cubans who committed valuable time and scarce resources to a cause they deeply believed in, thus helping define the issues of concern of the day. While history mostly forgotten them, Mirabal returns these people to the historical stage. As evident in both the range of people discussed and the research cited in the footnotes, the author has done more than her homework; she has come to “know” her subjects.

Equally revealing, Mirabal’s study is an invaluable chronicle of the political, cultural, and service organizations that Cubans created to both further their homeland’s independence and better their lives in the rapidly growing city. She carefully reconstructs the history of such groups as El Club Cubano Inter-Americao (CCI), Cuban Anti-Slavery Society and Partido Revolucionaro Cubano (Cuban Revolutionary Party, PRC). She scrupulous details the ideological positons that shaped–and sometime broke–these groups.

Mirabal in an Associate Professor in American Studies and the U.S. Latina/o Studies Program at the University of Maryland, College Park. She gladly acknowledges, “My oral histories of Melba Alvarado, an Afro-Cuban migrant who left Cuba for New York in 1936, grounds the book.” She traces the experience of this complex community, one separated by more than 90 miles from its homeland, over the course of a century and a half, and does so with an unflinching eye with regard to three underlying issues: race, gender, and class relations. The unstated but defining issues the holds the book together is simply: independence for what and for whom?

The first Cuban exiles began settling in New York in 1823 when the city was the center of the sugar trade. That year, President James Monroe proclaimed the Monroe Doctrine, which asserted the U.S.’s unofficial hegemony over the Western Hemisphere, warning European nations to halt any further efforts to colonize or install puppet regimes in the Americas.

In the following decades, many Cubans—notably white property owners—promoted the idea that the U.S. should annex Cuban to free the country from Spain. Annexation of Cuba, along with Mexico, Puerto Rico, Haiti, and other island nations of the Caribbean, was strongly backed by southerners who supported secession to further slavery by creating a new Confederate nation.

These efforts culminated in the Cuban revolt of 1867 that led to the failed Ten Years’ War (1867–1878) and the ending of slavery on the island. The revolt fueled Cuban migration to New York, many of them working in the now-legendary cigar-rolling industry. By the mid-1890s, insurgency mounted under Martí’s leadership culminating, in 1898, in the Spanish-American War; the adoption of the 1902 Platt Amendment turned Cuba into a U.S. protectorate and it seized Guantánamo Bay as well the Philippines and Puerto Rico. However, Cuba’s independence from Spain led to the imposition of an oppressive dictatorship that fueled émigré activism for the next half-century.

Mirabal’s book will be a valuable resource for those familiar with the history of Cubans in the U.S., but a challenging read for those seeking to understand the life of what today is a tiny community in New York. The 2010 U.S. Census reports that only 40,840 people identified themselves as being of Cuban “origin or descent” living in the five boroughs.

Northern New Jersey’s Hudson County is known as “Havana on the Hudson” and, in the city, Puerto Ricans, Mexicans, Dominicans and Columbians, among others, are now the defining Hispanic/Latino communities. Unfortunately, the author does not provide population estimates of the number of Cubans calling the city home during the major phases of immigration that she chronicles; they would have been helpful guideposts to appreciate the community’s changing fortunes.

New York serves as a background cityscape for the narrative the author painstakingly lays out. Except for a handful of carefully drawn discussions (e.g., cigar makers, CCI in the Bronx), the real life of New York plays a limited role framing the author’s narrative.

She regularly shifts back and forth from events, issues, and people in New York to what’s happening in Cuba (and Florida). She pursues, sometimes in exhaustive detail, the political, ideological, and personal debates that defined the struggles within the émigré community. (At these moments, the book reads like an as yet unfully digested dissertation.) She only briefly considers how most Cubans made a living, let alone how they got along with other immigrant communities, especially non-Hispanic groups.

Most disappointing, while Mirabal mentions the horrendous Draft Riots of 1863, she doesn’t consider its impact on the Cuban migrants; one can only imagine that many Afro-Cubans lived in the Five Points and were terrorized, if not victims, of the white mobs that attacked the tiny African American community.

Equally troubling, she fails to consider the tumultuous period of anarchist unrest that broke out around the time of World War I, marked by the 1914 accidental explosion at 1626 Lexington Avenue that killed four activists, to the Wall Street bombing in 1920 targeting the headquarters of J. P. Morgan & Co. It culminated in the notorious Palmer Raids in which Emma Goldman, Alexander Berkman, and a thousand or so others were deported. Were Cuban radicals drawn to anarchism? Were any deported?

She similarly passes lightly over the tumultuous early Cold War era, mentioning that some Cuban émigrés were communists and that communists were active in CCI. In 1955, the NYPD established the Bureau of Special Services (BoSS), popularly known as the “Red Squad,” that spied on radicals from communists to the Dorothy Day and the Catholic Worker. In July 1959, HUAC held hearings in New York and San Juan on “Communist activities among Puerto Ricans in New York City and Puerto Rico.” One can only wonder how more Marxist-orientated Cubans experienced this very disturbing period, especially given the then-unfolding Cuban Revolution?

These shortcomings do not take anything away from Mirabal’s prime concern: the fate of the Cuban diaspora. She is a well-studied scholar, one very much of the 21st century and fiercely observant regarding the three key issues distinguishing contemporary academia: race, gender, and class. Her rigorous analysis, rooted in these issues, enables her to present an invaluable counternarrative to the complex political and social story she tells.

Suspect Freedoms is not really a book about New York; the city is but a backdrop to the struggles (both political and personal) and the remarkable people who defined the Cuban émigré community who happened to live there over the last two centuries. The book ends on a somber note just before the Revolution takes place and as the Cuban-American community is about to undergo a fundamental and irreversible reordering.

Since 1959, a new—and very different—wave of Cuban immigrants came to the U.S. Ironically, they were fleeing a version of the revolution that so many earlier émigrés spent their lives struggling to realize: socialism in an underdeveloped Caribbean island nation. The U.S. blockade of Cuba imposed at the time of the Cuban missile crisis has just begun to crack; what happens under President Trump is anyone’s guess.

Most important, today’s Cuban-American community has been assimilated into American life. Many of them, especially among the millennials of second- and third-generation immigrants, support the Revolution and an independent Cuba.  They are returning to their homeland to holiday, connect with relatives, and see how another society confronts the challenges of the 21st century.

New York has long been a city of—to use one of Walt Whitman’s famous word—“multitudes” and Mirabal’s Suspect Freedom is a revealing portrait of one segment of that multitude.