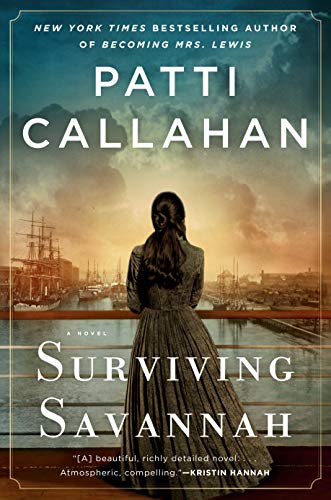 “Surviving Savannah is an epic novel that explores the metal of human spirit in crisis. It is an expertly told, fascinating story that runs fathoms deep on multiple levels.”

Fate, chance, choices, and destiny are mere concepts until an inspired author comes along and depicts the essence of each through the power of story. Patti Callahan has done just that in her widely anticipated Surviving Savannah. The New York Times bestselling author sets historical fiction’s stage in a mahogany paneled library before a roaring fire, where six- and eight-year-old sisters, Everly and Allyn Winthrop, sit at their pipe-smoking grandfather’s knee, while he spins yet another fantastic version of the ill-fated, steamship, Pulaski. Haunting imagery of the Pulaski looms in the family’s multi-generational, Georgian style house on Savannah’s historic Jones Street: “Above the fireplace hung an oil painting of a lustrous steamship with its sails spread wide and its wheels churning the water into whipped foam, the sky clear and bluer than the sea as human figures on the deck regarded the vast sea.”

Though the young sisters have lived with the painting since birth and know the yarn well enough to name its characters and chant its highlights, they settle in for their grandfather’s explosive story of characters connected through one fateful night. “Now comes the story of how they survived,” their grandfather says, and when Everly asks what really happened to Lilly Forsyth, one of the passengers who is now the stuff of local legend, their grandfather grows pensive. “The secrets are lost to the waves. Only the sea knows, my child, and she keeps her secrets well,” he says then adds with uncanny foreshadow, “Maybe one day she will tell you.”

It is present day Savannah, Georgia, and history professor, Dr. Everly Winthrop, is plagued by an unreconciled sense of complicity in the tragic death of her best friend, Mora, who was killed by a hit and run driver the year prior. At the conclusion of one of Everly’s classes at Savannah College of Art and Design, Mora’s fiancé, Oliver, appears unexpectedly. He has news that, after 180 years, the steamship Pulaski, a passenger ship that exploded with roughly 187 people on board en route from Savannah to Baltimore, has been discovered, thirty miles off the coast of North Carolina.

Oliver extends the tempting offer for Everly to assist him as a consultant at the Rivers and Seas Museum of Savannah, in preparation for a major exhibit of the steamship Pulaski. Were it another time, Everly’s passion for history and all things related to the sea would be ignited, but Everly is reluctant to join forces with Oliver, who was there with Everly and Mora at the moment Mora died. Invited to meet Oliver at the museum the next morning to go over the findings, Everly is hesitant, but the lure of ferreting out “the story behind the story” of what happened to the Pulaski ultimately wins, and in short order, the reader is along for Everly’s thrilling, investigative ride that unfurls spectacularly in dual timelines.

It is June 13, 1838, and the steamship Pulaski is “lashed with ropes as thick as trees to the Savannah River’s wharf” as it prepares for its fourth voyage to Baltimore, with one overnight stop in Charleston. Lilly Forsyth boards holding her five-month-old daughter, accompanied by “her Negro nursemaid, Pricilla,” and her aristocratic and abusive husband, Adam. With them, they carry “what seemed half the household’s contents for this summer season—their silver, china, and wardrobes, along with a trunk full of Adam’s gold.” They are like most passengers who have booked the luxury liner to escape Savannah’s summer heat, and alongside the Forsyths is Savannah’s prominent Longstreet family, cousins to Lilly, totaling eight, among them Lilly’s dear friend, Augusta, whose fiancé died.

In alternating timelines, the past and present weave in such a way that the reader is on Everly Winthrop’s path to discovery of the 1838 calamity that forever marred Savannah’s history. We feel Everly’s passion as she pursues long buried details. We experience the Pulaski’s harrowing demise, and wince at the passengers’ life-threatening aftermath, as told through the eyes of Lilly’s and Augusta’s versions of the story.

In vivid detail, Callahan leaves nothing unattended. “The promenade deck broke free first, timbers splintering, splitting the sea, sloping and sending passengers into the waves before bobbing up to float like an apple in a barrel.” “Then the screams began, the horrifying cries of passengers echoing across the water.” The story covers land and sea; it digs through papers and photos, dives to the sunken wreckage to look for artifacts. It pieces together a full account of that terrible night and reconstructs the details that culminated in the Pulaski blowing apart and sinking in deep waters, casting the lives and valuables of the passengers asunder and giving rise to Everly’s questions of what it is, in life, that truly matters.

There are deep probing, existential questions, and surprising linkages in Surviving Savannah. Everly Winthrop grapples with her buried feelings over the death of her friend Mora while exhuming the Pulaski’s tragic story in the interest of the museum’s exhibit in such a way that dovetails into the lives and secrets of the Pulaski’s survivors. While diving underwater at the Pulaski’s buried site, Everly muses, “Here I was part of something unseen, just as Mora was now. There was such a thin veil between the seen and unseen, between the living and the dead. Who was I to know where that line existed or where she was now? Who was I to understand death or life? They were a mystery.” “In my mind, images floated by, broken pieces of a fragile life. What really mattered? Minutes or years passed as I searched for the answer. Finally, my heart called out: Everything. Everything matters.”

At once painstakingly researched, compelling historical fiction with the lure of a heart and soul story concerning a woman coming to terms with her own heartbreaking trauma, Surviving Savannah is an epic novel that explores the metal of human spirit in crisis. It is an expertly told, fascinating story that runs fathoms deep on multiple levels.