Survive the Night: A Novel 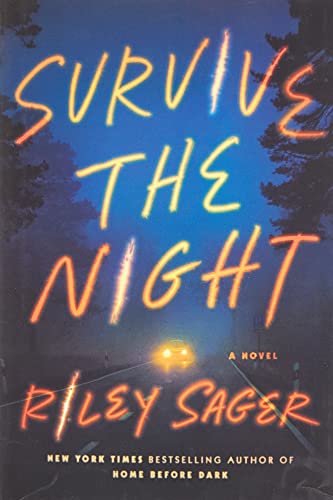 “Movie fans will thoroughly enjoy the many references to classic movies and how they are woven into the narrative.”

Charlie is leaving school mid-semester. Her roommate has been murdered by the Campus Serial Killer, and Charlie feels her actions in some way led to Maddie's death. The weight of her guilt and fear force her to flee.

She's at the college ride board posting a notice for a ride home when coincidentally Josh Baxter appears and posts a notice seeking a rider to split the gas on his own car ride back to Ohio.

Charlie is a film buff. Name a movie, and she'll know the actors, the story line, and the year it was released, who starred in the remake and when it was released. She is so addicted to movies that she often slips into an imaginary world powered by a movie projector in her head. Sometimes she can't tell if she's seeing a movie reel by reel or living reality reel by reel.

Her feelings of guilt related to Maddie's death and her fear of the still at-large Campus Serial Killer, prompt her to call Josh and arrange a meeting place so she can take the six-hour drive back to Ohio with him. Her boyfriend professes his enduring love, and she lets him think she will return the following semester.

"Robbie leans in for a kiss and a tight hug. Wrapped in his embrace, Charlie feels a stab of guilt about her decision to leave, which was caused by another, far different sense of guilt. It's a Russian doll of remorse. Guilt tucked into guilt that she's ruining the only thing that has yet to be ruined."

While she waits at the curb for Josh to pick her up for the long ride home, she reads the Take Back the Night flyer taped to the streetlamp next to her.

". . . The flyers are a direct response to Maddy's murder. As were the candlelit vigils. And guest speakers. And grief counselors who descended onto campus armed with pamphlets and good intentions."

Included on the flyer is this list of safety rules:

"Never go out alone at night.

"Always tell someone where you're going.

It's nine o'clock at night when Josh's car finally arrives, and Charlie hops right in.

Readers may pause here to contemplate. This story takes place in the nineties, not the seventies. Would any woman even do this? Get into a car with a stranger? Especially with a killer on the loose?

What follows is a suspenseful, tension-filled road trip during which Charlie's false assumptions keep the story going. Her movie fantasies get in the way of distinguishing fact from fiction which heightens her terror and prevents her from making the best decisions.

At a toll booth, Josh exchanges small talk with the toll collector, and Charlie sees an opportunity to escape:

"As Josh rolls up the window, Charlie's hit with a desperate need to yell to the toll collector for help. Her mouth drops open, but she doesn't know what to say. Josh just said she experienced a movie in her mind, and she has no idea why or what it could mean. And now it's too late, because the window is shut and the car's in motion again.

". . . It's not until they hit fifty-five that curiosity gets the best of Charlie. She clears her throat, trying to rid the fear that coats her tongue like drying paint, and says, ‘What were you talking about back there?’”

And just like that the opportunity for rescue is gone.

Readers have high praise for Riley Sager's work, and he has many devoted fans. He's a gifted wordsmith and the author of several award-winning novels.

However, in this one, style overcomes substance. The writing consists of apt descriptions, the story moves apace, there are thrills and surprises throughout, and the reader always knows what's going on.

But obvious red herrings litter the opening pages, and lead-footed false clues are pounded home with a sledgehammer. Because of that, for regular readers of crime fiction the identity of the Campus Killer shines through bright as a copper penny early on.

Movie fans will thoroughly enjoy the many references to classic movies and how they are woven into the narrative.