Survival of the Richest: Escape Fantasies of the Tech Billionaires 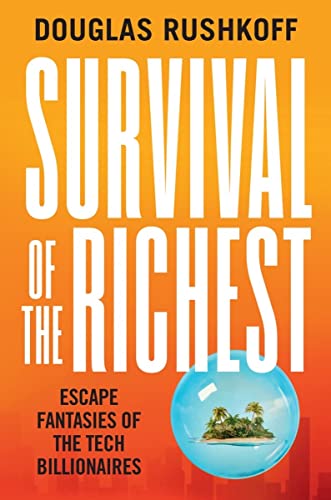 It’s not surprising that there are several books called Survival of the Richest—it’s rather an obvious title—and it’s also not surprising that Naomi Klein calls this one “a vital, lucid, and enraging read,” since she’s favorably quoted in it. Spy magazine used to call this “logrolling in our time.”

What is surprising is how the book fails to live up to its fascinating subhead—“Escape Fantasies of the Tech Billionaires.” It would be great to get the details on exactly how billionaire Elon Musk plans to blast off to Mars with a personal escape pod and a Tesla Roadster for company. Or what billionaire Peter Thiel was thinking when he funneled cash into the Seasteading Institute, which is supposed to be a series of “permanent, autonomous ocean communities to enable experimentation and innovation with diverse social, political and legal systems.” But that’s not here.

Instead, we get the world according to Professor Douglas Rushkoff, primarily derived from two sources: his fertile brain as it engages with his laptop and brief encounters at the very economic elite/global tech conferences he repeatedly decries in the book. For a man concerned about the future of the world, he sure racks up the frequent flyer miles.

The book starts promisingly. “I got invited to a super-deluxe resort to deliver a speech to what I assumed would be a hundred or so investment bankers. It was by far the largest fee I had ever been offered for a talk—about a third of my annual salary as a professor at a public college—all to deliver some insights on ‘the future of technology.’” He flew business class, wore noise-canceling headphones, and ate warmed mixed nuts.

Rushkoff soon concludes that they’re not interested in his talk, and instead want his ideas—confusing him with a futurist—on where to flee when the world inevitably blows up. New Zealand or Alaska? One CEO was building an underground bunker. Another had hired some Navy SEALs. Interviews with these folks would have made a fascinating and revealing book—what do they know that we don’t? But the encounter is over by page nine.

It's possible to find a book annoying even though you wholeheartedly agree with its premise. Rushkoff is a self-proclaimed humanist and tried to reason with the elites—aren’t we all in this together? Wouldn’t the money that Jeff Bezos is spending on his space company, Blue Origin, be better spent on improving conditions on our own tinderbox of a planet? Of course! His ex-wife, MacKenzie Scott, clearly thinks so, since she’s given away more than $8 billion to worthy causes.

Rushkoff is (maybe for not much longer) on the A-list as a speaker at events where the elites gather, but he squanders the opportunity such access has given him. The book is, instead, full of the kind of facts about the global elite you can get by Googling. Here’s another one, via U.S. Senator Elizabeth Warren: The top one percent in the U.S. has the same amount of wealth as the bottom 90 percent. It’s not the one percent—it’s the 0.1 percent!

The author tells us that many in the top tier subscribe to what he calls “The Mindset.” Faced with the realities of our climate- and war-torn Earth, their impulse he says is to “Fix it. Hack it. Reboot it. Develop it. Scale it. Automate it. As if doing less, or even doing nothing, were not an option. Repairing what we have, scaling back, or even seeking incremental progress doesn’t make for an exciting podcast, online panel, or TED talk.”

Okay, there’s legitimacy to his argument of doing with less. The problem of exceeding our planet’s carrying capacity (which some say is just three billion people, not the eight billion we have now) was succinctly laid out in the 1972 The Limits of Growth and many other books.

But Survival is only barely prescriptive. It’s mostly about ridiculing the rich, and that’s something that Rushkoff—a fairly deft writer—does very well. The first-hand account of the absurd 2003 Alliance for the New Humanity conference in Puerto Rico—keynoter Ricky Martin didn’t show up, Deepak Chopra was surrounded by bodyguards, baby veal was served—is fairly entertaining. But it’s also an easy target, and if Rushkoff thought it was so absurd, why did he accept the free junket?

The author goes on to trash electric cars and solar panels because they use up resources in their production and depend on a non-optimized grid that still has coal in it. But the alternative in the real world, given that the grid isn’t going to turn around overnight, is continuing to pump out carbon dioxide from a fleet that burns gasoline and diesel (and a lot of it, because Americans love huge SUVs). Rushkoff’s simplistic solution is to “start carpooling, walking to work, working from home or working less.”

The irony is that urging people to carpool or telecommute has never worked—it took the COVID outbreak to get us out of our routines. At the end, on page 185, the author finally gets to the “way forward,” and it’s nothing new—essentially, the voluntary simplicity movement all over again. Stop supporting the big Mindset companies, consume less, travel less, buy local, support coops, change tax policy. It’s all over in a paragraph.

Somewhere in the world, far from public scrutiny, a tech billionaire is—right now—preparing for the Apocalypse with a private island, vast hidden food stores, a supply of breathable air and a private army with stockpiled weapons. It’s survivalism with unlimited resources, and it’s not likely to work, since private islands are going to be inundated by climate change. Maybe that’s why Thiel’s sea-based communities float? An inside scoop, as the book’s title implies, would be useful.