Survival of the City: Living and Thriving in an Age of Isolation 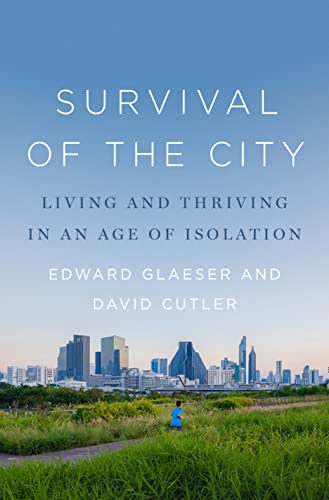 As is true with so many things, the pandemic has both brought to light new problems as well as highlighted old ones and hastened trends already occurring. The same is true when it comes to cities. In this wide-ranging book written during the Covid-19 crises, Harvard economists Edward Glaeser and David Cutler ruminate upon the challenges the pandemic has wrought upon cities, diagnosing what ails them and also offering prescriptions regarding what needs to be done to cure them.

The book commences by declaring cities are under seize. Yes Covid-19 is threatening cities, forcing people to live in isolation, work from home, shop remotely, or simply flee to the suburbs or rural areas. But this current pandemic is only the latest in a wave of previous contagious diseases that recently have infected cities, and it will not be the last one to do so. Moreover, cities were already facing other problems including deindustrialization, crime, declining tax bases, declining school performances, and more.

While urban density offers its advantages and the trend in 19th century America was the move to the city, the story of the 20th century and now and perhaps in a post-pandemic world is outward. Were trends such as continued work or shop from home to continue beyond Covid-19, the city as we know it may be doomed unless appropriate steps and prescriptions are followed.

Here the authors begin first to describe the fate of the American city. Some of its problems are a product of forces beyond its control, others are self-inflicted mistakes. Chapter two, for example, highlights a historical tale of how cities have always been the victims of pandemics, with the authors tracing the story back to ancient Egypt, Persia, and Ethiopia, through the Black Plague of the Middle Ages, and into the present.

Cities as porous entities, were the first creatures of globalization as they attracted visitors and immigrants from distant places, bringing with them whatever pestilence they had. The new globalization of the 21st century only makes this problem worse, with free trade, open borders, and migration merely aggravating the problem.

Having pronounced cities as perennially subject to the vicissitudes and vagaries of disease, the book then takes a significant turn as chapters three to nine first highlight some traditional techniques to abate disease, such as better sanitation, or ponder how automation and robots might mitigate the spread of infections.

Chapters seven, eight, and nine specifically return to the problems facing cities, pointing to many maladies that read like of textbook list of classic criticisms of why cities have become unlivable. At least these are problems in the mind of Glaeser and Cutler, who self-describe themselves as suburbanites who have left the city.

Yet for the authors the core problem with cities is their ungovernability. They opine for the way corporations and their consultants supposedly manage, seeking the need for cities to be run more business-like. In fact, their heroes are mayors such as Michael Bloomberg who brought results-orientated metrics and management techniques to urban governance.

The same needs to be done for police departments, public schools, and for all other urban problems. The governance problem, for the authors, labels public sector unions, especially for teachers and police officers, the main impediments to reform, as well as city zoning that simultaneously creates too much density while also not allowing for enough development to build more residential properties and business growth.

The book concludes with a variety of prescriptions for creating a new world entity to establish and enforce public health standards. It also calls for education, police, and other reforms, including a demand for increasing opportunities for individuals and businesses to thrive.

If you went to Harvard or are part of an elite, white, suburban mentality, you will love this book.  It is written with a hubris and smugness characteristic of many ivory tower elites. It takes a neo-liberal, pro-management approach to running cities, largely ignorant and blind the politics of cities. It also gives at best lip service to problems of race and class in (urban America), and it largely fails to appreciate the biases in the authors’ solutions.

The book makes overly broad and sweeping generalizations about cities, such as their demise, without being aware that for the last two decades urban America and New Urbanism have reversed population exoduses. They also simply get wrong or fail to appreciate why suburbs grew. They argue it was a cost issue, while ignoring the role of the federal government in redlining cities or how the building or roads in the 1950s along with white flight produced the metropolitan racial and class patterns we presently see.

There are also research and methodological problems here. The authors act as if they are the first people to ever discover the problems they note, ignoring rich bodies of previous research.  When they do cite studies to back up their claims, they often cite business consultants, their former students or colleagues, or one-sided studies on issues such as with unions. They also fall prey to ignoring the Hawthorne effect when it comes to many of the one-time studies they cite.

Finally, by the time one finishes the book the authors have pronounced their judgment on just about every topic under the sun, even if only remotely connected to cities. In the process, as they do when they discuss the need to lower health care costs, they recycle Clintonesque managed care ideas. Overall, the book offers a cost-benefit, pro-management top-down McKinsey consultant style solution to everything that possibility or remotely impacts cities.

By the look of the dust jacket quotes from leading academics at elite institutions, the book will be well-received among them but of little practical value to most city politicians. It is also not a book written with citizens and residents in mind who largely have no voice in the vision of the city this book advocates.