Survival of the Beautiful: Art, Science, and Evolution 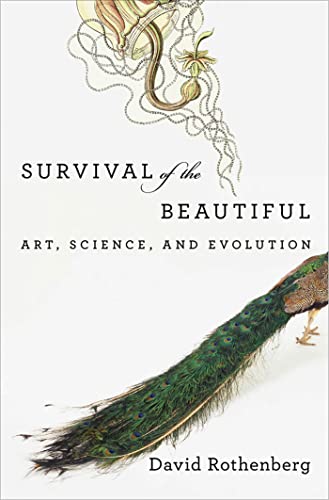 “Usually art and science are discussed as opposites, and the people who apply them are not only opposite types but often hostile to each other. Mr. Rothenberg contends that art and science are in fact closely related, if not mutually dependent, and part of the same evolutionary whole.”

This is a brilliant and fascinating book that may leave you feeling a bit twirly at the end. Most science writing is linear, but Survival of the Beautiful was written by a scientifically inclined philosopher and artist, whose approach is more circular—or perhaps that should be “more radial”—as he starts from the factual and familiar, shoots out in different directions, then returns to solid ground in the center before taking off again.

How Mr. Rothenberg approaches his topic doesn’t matter, because he isn’t trying to prove anything. Rather, he presents an alternative interpretation of reality for our contemplation. He’s more interested in framing new questions than in finding concrete answers, though by the time he’s done, some things seem so obvious and logical it’s as if we knew them all along.

Starting from the established theory of evolution through natural selection (“survival of the fittest”), along with its subset, sexual selection, he proposes that there’s a third force to consider: selection through a species’ aesthetic taste, or survival of the beautiful. He builds a strong case for this by connecting dots throughout the arts and sciences, and interviewing experts on the cutting edge of each field, quoting them generously.

These examples build up to support the likelihood that art as a phenomenon is not unique to humans, and the appreciation of—need for—predisposition toward beauty is shared by the entire natural world. The most startling example he offers is the bower bird, “the only other species besides human beings that is known to create things . . . beautiful beyond their function, structures we have a hard time calling anything else but art, the arrangement of objects that please . . .”

The bird’s efforts can be explained only in part by established evolutionary theory. Using this behavior as a launch pad, Mr. Rothenberg both explores the limits of art and dissects it, demonstrating how patterns and behaviors overlap from the molecular level on up in a synergistic yet complementary way.

Usually art and science are discussed as opposites, and the people who apply them are not only opposite types but often hostile to each other. Mr. Rothenberg contends that art and science are in fact closely related, if not mutually dependent, and part of the same evolutionary whole. “I do not believe evolution as we know it can explain art, but a deeper consideration of art can enhance our understanding of evolution.”

Survival of the Beautiful: Art, Science, and Evolution presents the author’s position in an engaging style, easily understood and alive with personality and excitement, and supports it with available evidence. His interviews with disagreeing experts are connected by his own thoughtful and careful logic, so that his theory comes off as credible and rational.

What he seems to be saying but never actually declares is that art is a language of the natural world just as mathematics is, and that both are needed in order to explain life’s dual character of order and chaos. A reason why, in the human world, art and science have seemed to be incompatible is that people consider them opposites instead of two sides of the same coin.

Mr. Rothenberg posits that both languages should be employed to fully understand reality, so they must be considered in relation to each other rather than in spite of each other. It’s a very attractive argument.

He punctures his own balloon, however, with intermittent bloopers. The first and most jarring of these is his comparison of the whale and the nightingale. After carrying on about the similarity of their song patterns—astonishing in creatures so different, and implying intriguing possibilities—he inserts a sonogram to illustrate. Oops! Wrong plan.

The graphic does contain bits of similar elements but nothing obvious that correlates with Mr. Rothenberg’s description, and certainly no striking patterns. Perhaps they jump out to a scientist trained to read such images, or are evident to an abstract-artist’s eye, but the average person won’t see them.

This hiccup comes on page 30, creating a worry about the remaining pages (especially since he says, “This is the convergence that led me to write this book.”) Indeed, the narrative races along with all kinds of observations that elicit a “Yes! Yes!” response because they make such good sense; but then he slips in something that hits you in the face like a very clean glass door that you walk into because you think the portal is open.

One of these is a paragraph about scientist Richard Prum, who “has done what many would consider impossible: accurately demonstrate what color feathers a fossil dinosaur had, ending more than a century of speculative reconstruction of dinosaur color based on wishful thinking and humanly impressive aesthetics. With the genetic techniques he has pioneered, in 2010 Prum and a team of researchers was able, for the first time, to accurately depict the color of one very interesting-looking historic beast . . . who lived more than 150 million years ago.”

That’s great, but what proves the colors are correct? How do scientists actually know? Mr. Rothenberg doesn’t even hint, just rolls on to say, “So at last we can answer the question that has gripped us for so long: which came first, the feather or the bird?” And he doesn’t really answer that, either, leaving one scratching one’s head.

As well, Mr. Rothenberg makes broad statements about artists that some artists may find silly, offensive, or untrue. Fortunately, he’s operating in an arena best known for its inconsistency and elusive qualities, so we can forgive some of his junkets.

The best approach to Survival of the Beautiful: Art, Science, and Evolution is to read it in the spirit intended: as a door-opener to new ideas and connective tissue in the skeleton of science, particularly biology and Darwin’s theory of evolution. Chances are good you’ll find Mr. Rothenberg’s “mad quest for some evidence of aesthetic ideas in the very way nature is put together” to be persuasive.