Surveillance State: Inside China's Quest to Launch a New Era of Social Control 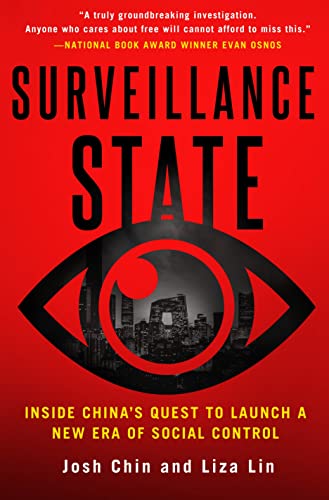 The 21st century marriage of technology and totalitarianism is on display in the People’s Republic of China, where the Chinese Communist Party (CCP) has constructed what Wall Street Journal reporters Josh Chin and Liza Lin call the “surveillance state.” Chin and Lin show that China today is a dystopian state where the CCP has harnessed the latest surveillance technology—facial recognition software, biometric data collection, artificial intelligence (AI), internet filtering firewalls, algorithmic controls—to improve its ability to control and, when necessary, repress its citizens.

The authors, who reported for five years from China and interviewed 150 people in 14 countries for the book, focus much of their story on how the surveillance state is used to stifle dissent within China, especially in Xinjiang Province—home of the Muslim minority Uyghurs. They write: “In late 2016, Party leaders . . . quietly ushered in an ambitious new phase in the campaign to eradicate Uyghur resistance” by using “cutting-edge tools being developed by Chinese surveillance companies to exert total control over an ethnic minority population.”

The CCP’s repression of ethnic minorities, of course, is nothing new. But the technique used today—total mass digital surveillance—has only recently become practical. And China obtained the tools of the surveillance state from Western companies who were encouraged by Western governments to “engage” with a post-Mao Zedong China that many believed was transitioning to some form of market economy. Economic reforms, many Westerners believed, would lead to political reforms. But when that didn’t happen, the economic and scientific “engagement” continued.

Chin and Lin recount the evolution of the growth of China’s high-tech surveillance state and show that at each stage of the process American and other Western companies—seeking and sometime obtaining huge profits—helped the CCP construct what the authors call a “tech-powered model of social control.”

Western companies such as Cisco Systems, Motorola, Sun Microsystems, Siemens, Nortel Networks, and others partnered with Chinese companies such as Alibaba, Tencent Holdings (creator of WeChat), and Huawei. “The Western business world,” the authors write, “. . . has midwifed the [CCP’s] surveillance state since its embryonic beginnings in the late 1990s.”

Those Chinese companies, unlike their Western counterparts, are ultimately controlled by the government and the CCP. They serve the interests not of shareholders but of the Chinese state and ultimately the Communist Party. And China has also exported its surveillance techniques to other autocratic governments, especially in Africa, as part of its Belt and Road Initiative (BRI).

The authors are no fans of Donald Trump, but they acknowledge that the Trump administration “tried to prohibit sales of advanced American technology to Chinese surveillance companies [but] with limited success.” Trump shifted from engagement to confrontation, especially toward the latter part of his presidency, but by then it was probably too late—China’s surveillance state had already become what author Stein Ringen calls “the perfect dictatorship.”

And the authors note that the global pandemic that emanated from Wuhan in early 2020 provided the CCP with a health care justification for expanding the surveillance state. “The pandemic,” they write, “proved a boon to the Chinese surveillance industry,” and helped the state enforce mask-wearing directives and lockdowns. They characterize the pandemic as “the Miracle-Gro that fed [the surveillance state’s] explosion.”

Chin and Lin also express concern that the same technology that helps Western police forces solve crimes “presents an unprecedented challenge to the notion of free will and to individual liberties that animate democracy.”

Chin and Lin’s book speaks to what is at stake in the global geopolitical struggle between the United States (and its allies) and China. If China succeeds in replacing the United States as the leader of a new world order, that order will be shaped not by liberal values and traditions but instead by “pervasive state surveillance” and control. The stakes could not be higher.