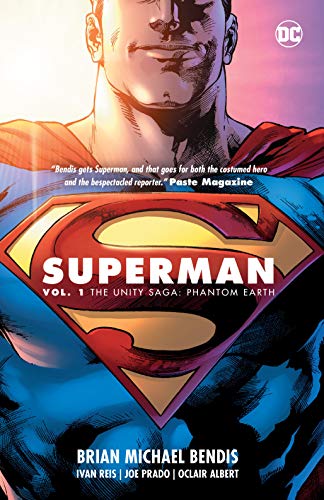 This graphic novel initially finds the caped crusader confronting the worst super villain ever: his own mid-life crisis. Comfortably married to Lois and father to a crabby pre-teen son who believes his own super powers grant him a “Get Out of School Free” card, Clark sits and broods. He recognizes the gifts life has presented him. He appreciates his powers which he uses daily to save Earth and its citizens, though they be consistently ignorant and prone to self-destructive behavior. He takes pride in his identity as a prize winning journalist. He admires his Justice League colleagues. But something is missing. He wants more.

Superman feels incomplete because his birth identity is incomplete. He does not know why Krypton was targeted for destruction or what forces were behind it. He worries that his birth father had a role in the end of Krypton. He wants answers. But the universe is infinite, and he does not know where to begin the search for his truth.

Knowing that Lois can handle family matters and that the Justice League can keep Earth safe, Superman flies off into the cosmos. He immediately encounters and defeats space-aliens intent on Earth invasion. Then suddenly he finds himself in the Phantom Zone. The Phantom Zone is an eternal intergalactic Purgatory to which Krypton condemned its enemies. Present there is Rogal Zaar, the villain who destroyed Krypton. Also present, it turns out, is the entire planet Earth.

From here, the mysteries expand. How did Superman and Earth enter the Phantom Zone? How can they escape? How can they keep Zaar at bay? Are there allies in the Zone to help them? It is a story that fans of Stephen King, Stephen Hawking, and Superman can all enjoy.

The art in this graphic novel is brilliant. It captures the storyline and propels it with all the energy born of a yellow sun, that which fuels the powers of Superman. The art makes bold both battles of mind and super brawn. The composite of story and art makes the saga worth seeing to its end, no matter how many future volumes that may require.