SuperBetter: A Revolutionary Approach to Getting Stronger, Happier, Braver and More Resilient—Powered by the Science of Games 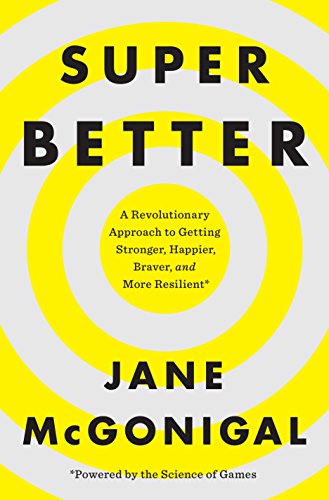 Jane McGonigal has been acclaimed for decades for her theories in gaming and the value of games in relation to positive psychology and problem solving; however, it wasn’t until 2009, when she suffered a traumatic brain injury (TBI) that she created the concept of Superbetter.

Superbetter is a very personal method of transforming the depression and anxiety related to injury into a successful mode for coping and actually getting better.

She goes from plain Jane to “Jane the Concussion Slayer,” a new identity used as “a way to start feeling heroic and determined instead of hopeless.” Post Traumatic Stress Disorder is examined in detail throughout the book, as she shows that there is a positive component, an alternative, called post-traumatic growth. In this she seeks to show how one can not only recover from TBI but also become better than ever before for the experience.

Her core strategy, or the rules of the Superbetter game, are seven touchstones for each player to achieve. They are achieved simultaneously, not as individual steps. She does encourage one to start with the simplest, but ultimately wants her readers to focus on interacting with all seven features of the program. The first is “Challenge yourself,” and this is the most dramatic of the set: many injured or depressed people don’t feel up to another challenge than the one they are already battling. Instead, she shows how challenge is possible, necessary, and rewarding.

She starts with quests, some so simple as to seem silly; however, willingness to try these simple tasks is a way of opening up the mind to new achievements. And it’s the mind that controls much of the pain experiences and anxiety issues that trouble the entire person.

The book is filled with anecdotal evidence as well as serious scholarly references. For example, she discusses burn patients, who suffer excruciating pain when their wounds are cleansed. Yet a virtual reality game, set in a snow filled environment, was given to some patients to play during the process. Their focus on the game and the impression of the snow enabled a reduction in pain so great that some didn’t realize their wounds were being cleaned while they played. Why does it work? The mind was intensely distracted, and the benefits were enormous:

“In order to prevent pain signals from turning into a conscious awareness of pain, patients need to swing their spotlight of attention somewhere else—and keep it there.”

In this, it’s cognitive focus that provides the needed distraction to focus pain somewhere else. And much of this is as simple as playing a game of Tetris. Tetris, the old-school video game, employs a simple but fast paced strategy of matching tiles in specific ways. Created in 1984, it still commands huge benefits when one is discussing cognitive focus. More traditional games like Scrabble, crosswords, or puzzles simply don’t offer the speed and required attention to become sufficiently distracted. So McGonigal encourages readers to focus on digital games with color and speed to divert attention.

Some of the applications of such gaming benefits are still evolving to be used for maximum benefit. In one case, Oxford scientists found that people exposed to a horrific situation that would likely result in them suffering PTSD could alter that eventuality by playing Tetris within six hours of seeing or being involved in the triggering situation.

Fascinating, yes. But in real life how does one predict a situation of such staggering proportions? And then, how would one possibly be able to ensure a Tetris game would be on hand? Further, would a victim even be willing (or able) to dispel their shock and pick up a video game? The benefits are intriguing, but the application is still impractical.

McGonigal also addresses the many stories in the media about how bad video games are and how they distance people from real life. She clarifies this by asking why people are playing these games for hours:

“If you typically play games to escape your real life—that is, to ignore your problems, to block unpleasant emotions, or to avoid confronting stressful situations—you will have a very difficult time translating your game skills to real life.”

Yes, gaming to escape is not beneficial. But if one is choosing to “play with purpose” as a form of quality family time, or to learn a new skill, or to relax after a rough day, then gaming can be a positive force. Viable applications are discussed throughout, mostly in cases of pain management. And specific Challenges, such as the Ninja Challenge, can aid any person in altering their minds, bodies, and relationships.

While McGonigal starts with her personal recovery story, she completes the book with a positive scope that widens out the possibility of anyone becoming Superbetter via her tactics.