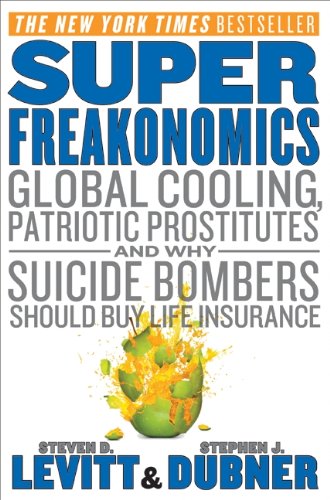 If you are one of the people who have not yet read SuperFreakonomics (the original, unillustrated version), this is your chance to pick up an even more entertaining version of the original—plus illustrations. However, if you’ve already read the original version, then you may wish to take a pass on this glossy hardbound edition by authors economist Steven D. Levitt and writer Stephen J. Dubner, whose New York Times bestseller has sold over four million copies in thirty-five languages.

Briefly, SuperFreakonomics (both illustrated and unillustrated versions) examines a number of unusual subjects from the eye of an economist via neoclassical microeconomic models of rational utility-maximization—a fancy way of saying that individuals make their choices based on searching for the best result regarding a particular problem.

While the underpinning economics behind the subjects that the authors tackle are rigorous and scholarly, the subject matter is quite varied and, in many instances, whimsical. Mainly, it’s the treatment of the disparate subject matter that truly separates SuperFreakonomics from any other book relating to economics that you’ve had the fortune, or misfortune, to read.

Some of the unusual subjects the authors tackle include: whether or not 38 people actually did watch Kitty Genoese’s murder (they didn’t) or whether monkeys can be trained to exchange money for sex (they can). The authors also emphasize some overarching themes such as altruism and incentive-based actions.

The real question then becomes whether or not the original (unillustrated) SuperFreakonomics, published exactly one year prior to this version, really deserves or needs a repackaging. Admittedly, that was two questions with two different answers: yes and not really.

Essentially, SuperFreakonomics, Illustrated Edition reads much like a printed web version of the original book with hypertext like sidenotes that expand upon a particular person or concepts from the main text. For example, as in the original book, the economist John List was singled out to tell to the story behind his rise in the field of economics and how he developed his theories. But some readers may have noticed that he had the same name as a notorious serial murderer; in this edition of SuperFreakonomics, there’s actually a detailed breakout box that talks about the killer who escaped justice for 18 years for the murder of his entire family including his mother, wife, and three children.

While all the extra material doesn’t really move the overall story along, it certainly adds drama and fits with the generally humorous tone the authors adopt.

And perhaps that is why it deserves, but does not need, a repackaging; the original book stood on its own and quite well. However, for those readers who might have been turned off by the “-nomics” part of the title, this edition places it firmly in the realm of educating entertainment. This is especially true of those readers from the MTV/WorldWideWeb generation who cannot focus on one thing at once but rather require multiple avenues of stimulation.

Then again, if you enjoyed the original and get the illustrated version as a gift, you’ll probably be happy that someone picked it up for you. As noted previously, altruism is a major theme throughout the book.