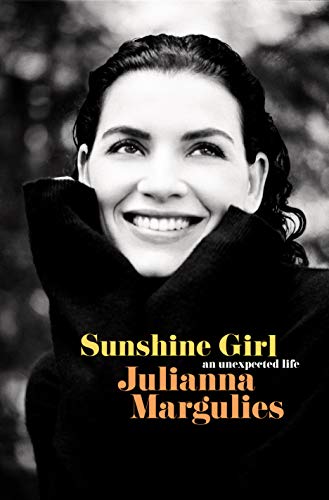 “‘This book was born during my recovery, when I finally had the time to sit back and ruminate on my own life.’”

Just as Julianna Margulies wrapped the last episode of The Good Wife in 2016, already in her late forties, she got the chicken pox! She had been working almost constantly for more than 20 years, and “This book was born during my recovery, when I finally had the time to sit back and ruminate on my own life.”

Margulies’ parents were both divorced when they met and married. Her mother was a dancer, and her dad was a law school dropout. She had two older sisters, and by the time Julianna was born (1966), her parents’ marriage was just about over.

The family moved to Paris in 1969 where her dad was working, hoping that would save the marriage—but her mother found boyfriends. She once brought home a boyfriend with a pet monkey who awoke the sisters as they slept. They all moved to London in 1970, also living separately.

Because their mother was an elusive hippie, the oldest sister Alexandra assumed many responsibilities from a young age. “I can’t imagine the responsibility my sister felt. She craved nor­malcy.”

The sisters shuffled between parents. “When I was in his world, life had a sparkle to it; back with my mother life felt more difficult.” They all moved back to New York when Julianna was almost seven, though her dad kept a separate apartment with his girlfriend, Vicky. The next adventure for the mom and girls was back to England when Julianna was in sixth grade.

With her father’s visits to her US-based summer equestrian camp, she always wished she could stay, instead of returning to England. “I couldn’t protest to my father . . . I also knew that if I complained or spoke ill of my mother, I would just be cementing . . . she was selfish, self-centered, and put her needs first at all times.”

When she was 13, they moved to New Hampshire and she was thrilled to be able to see her dad, often flying to NYC on weekends. Julianna’s first summer job at 15 was as a nanny for an eight-month-old baby in the Hamptons whose parents were E.S.T. followers and totally “nuts.”

Julianna took a year off, living in England with her best friend, Rowena, before starting Sarah Lawrence College in New York. At first glance she thought it was a school for rich kids, “I’m not going to last the semester, I told myself.”

But then she took theatre classes and found “a place to finally release all these emotions . . . anxiety . . . when I was a kid always on the move to uncertain places.”

After graduation, while living with a boyfriend in Brooklyn, waitressing at night in NYC—with a rude encounter with Russell Simmons, and auditioning—with Steven Seagal and his gun, Julianna inched closer to fame. Her first role was a hooker in Out for Justice; she obtained her coveted S.A.G. card.

During auditions, there was often unspoken prejudice, “What is she? Black? Hispanic? Black Irish? I never heard Jewish . . .”

She soon moved to Venice, California, and won an Emmy for ER. After breaking up with her boyfriend of 10 years she developed a love for cooking and baking.

Julianna returned to New York, and while interviewing agents, she met her future husband, Keith, whom she first thought was an actor—a no-no to date. But he was a lawyer! They married in 2007 when she was seven months pregnant.

Margulies began her next famous TV gig on The Good Wife when her son was young. The family bought a house in upstate New York. Finally, content with her life, she keeps a copy of Gratitude by Oliver Sacks at her bedside.

In summary, the reader will observe the pervasive, negative influence Margulies’ mother had on her life, but there were glimpses of reconciliation as she ditched the ten-year emotionally abusive relationship with her boyfriend and finally saw things differently. “My child­hood dictated much of my adult life . . . because I had made a vow as a teenager to never be like my mother.”

One empathizes with Margulies’ rough childhood and marvels at her sheer resilience over her mother’s erratic behavior. Children of divorce rarely have it easy. Overall, Sunshine Girl is a fascinating, quick read.