In Sunlight or In Shadow: Stories Inspired by the Paintings of Edward Hopper 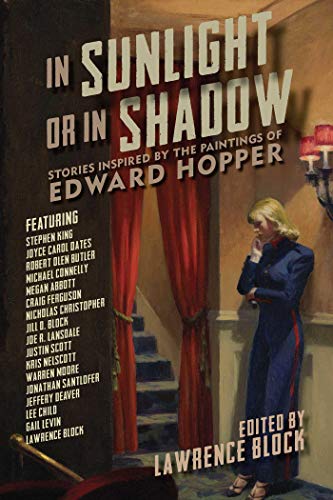 Crime fiction and suspense author Lawrence Block has been publishing for more than 50 years, and his latest offering is a case study in the crafting of a successful anthology of fiction: begin with an irresistible hook that unifies the collection, assemble an all-star cast of contributors, and fit the component parts together in an engaging and appealing product. Welcome, readers, to In Sunlight or In Shadow, an anthology of stories inspired by the paintings of 20th century American realist painter Edward Hopper.

Block’s irresistible hook for this anthology is a selection of Hopper’s work between 1914 and 1961. Readers are treated to 18 reproductions of his paintings, including the quiet, brooding New York Movie (1939) which adorns the dust cover; Automat (1927), which seems to define urban solitude; and the famous Nighthawks (1942), depicting customers in a diner late at night. It is a tasty sampling of Hopper’s work that is in itself a tribute to his contributions to American realism.

With such a compelling hook, it’s no wonder Block was able to entice 16 other accomplished authors to contribute short stories, each inspired by one of the paintings. The result, as Block himself notes in his foreword, are pieces that avoid the usual pitfall of resembling each other too much and offer the reader a range of tales from crime fiction to horror to literary fiction.

Most of the stories move into the interior of their designated painting for their subject matter. At one extreme, Joyce Carol Oates chooses to limit her story “The Woman in the Window” to the moments leading up to what was about to happen to the naked woman staring out the window in Eleven A.M. (1926), while Joe R. Lansdale uses the aforementioned New York Movie merely as a point of departure for his entertaining tale “The Projectionist.”

A few authors, on the other hand, write about their selected painting as an object of art in itself. Michael Connelly, in what could be considered the place of honor, presents grateful readers with another Harry Bosch short in which Nighthawks brings his protagonist into the Chicago gallery where it is on display as he surveils a young woman for a client. Similarly, Jeffery Deaver tells an engaging Cold War story of a disgraced Soviet GRU colonel in which a post card reproduction of Hotel by a Railroad (1952) plays a prominent role in his demise.

As with all anthologies, some contributions don’t measure up to others. Megan Abbott’s “Girlie Show” was not the strongest offering Block could have chosen to kick things off, while his own “Autumn at the Automat” provided an excellent conclusion.

Robert Olen Butler’s “Soir Bleu,” based on the 1914 painting of the same name, came off as contrived, but “Still Life 1931” by Kris Nelscott (Kristine Kathryn Rusch), based on Hotel Room (1931), was perhaps the best story in the collection, telling the story of Lurleen, a white volunteer/informant for the NAACP at the beginning of the Great Depression.

Finally, the anthology would not have been complete without Stephen King’s “The Music Room,” inspired by the Hopper painting Room in New York (1932). Master of the thousand-page bestseller, King proved he can also produce short fiction with a story that moves from an innocuous interior scene featuring a man and woman passing time in a room to a chilling, horrifying revelation of cold-blooded cruelty that only King could pull off.

In Sunlight or In Shadow is a well-constructed, visually attractive publication for which Maria Fernandez at Pegasus Books in particular deserves a tip of the hat. Her interior design work, showcasing the editorial efforts of Lawrence Block and the contributions of his all-star cast, makes this anthology a must-have for every bookshelf.