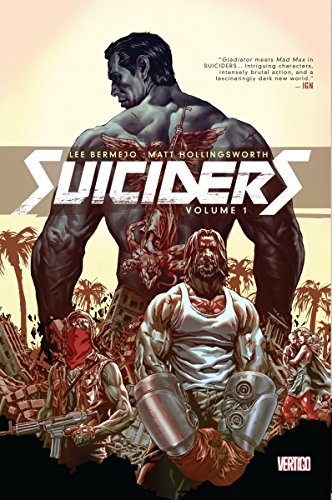 “Tight and intense, vivid and dark, Suiciders is entertaining and exciting.”

The Big One has hit Southern California, leaving the city of Los Angeles split in two: New Angeles and Lost Angeles. A near future tale of two different worlds, Suiciders is classic dystopian story of the Haves versus the Have Nots, each side fighting for supremacy in a world that both are struggling to understand and survive in.

New Angeles is for the wealthy, the privileged, the perfect. A walled-off city with all the tech and physical enhancements and upgrades the elite could possibly need to live lives of comfort and entertainment. It being SoCal, physical perfection is considered the norm. If you can’t afford to get the best plastic surgeon then maybe New Angeles isn’t for you. So get out. Now.

Lost Angeles is a slum. The dregs of the old world left outside the wall of New Angeles to rot and decay. Flooded, crushed, a wasteland of despair where the sick, the injured, the imperfect wallow in their misery and suffering, ignored by the privileged that live just beyond the wall that mocks them daily. It is a place of crime and violence, rage and disease. Those that live in Lost Angeles are there forever, barred from entering the illusory utopia of New Angeles.

Yet something joins both worlds: the suiciders, cyborg gladiators that fight to the death. They are the rock stars, the celebrity jocks, the legends in the making. But one stands higher than them all, the one called the Saint. Undefeated and unstoppable, the Saint fights weekly, defending his crown as the grand champion. He has no other choice. He can defend his crown and live or fall in the arena and die.

There are no ties for suiciders.

But someone new has entered New Angeles, and he has skills that could put a stop to the Saint’s reign. He may, in fact, get a little help with that from the Saint’s own manager. The money has to flow and if the Saint refuses to play by the rules and do as he’s told then there may be a position open for a new champion.

Filled with blood, violence, underworld intrigue, and drama, high-rollers with more cash than God, sex, murder, and the downtrodden constantly being ground to dust under the elite’s boot heels, Suiciders is not the most original graphic novel out there. The dystopian gladiator culture storyline has been done many times before, yet this graphic novel is able to keep it fresh by adding layers and levels of mystery that keep the reader guessing as to what will come next.

Tight and intense, vivid and dark, Suiciders is entertaining and exciting. Finely crafted dialogue as well as amazing art by Mr. Bermejo makes Suiciders a welcome addition to the already full shelves of the graphic novel market.