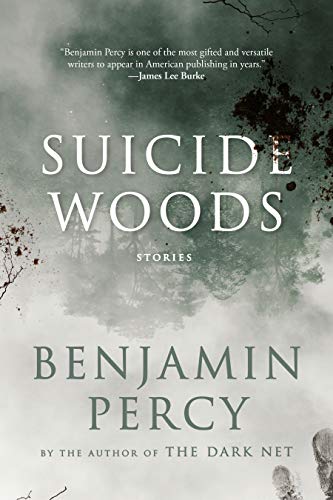 Especially if you’re thinking of wandering down into Benjamin Percy’s woods. People are killed, people are eaten, people are sucked into another world and, as the title says, people commit suicide. This book of nine stories and a novella carry the reader into new strangely imagined disturbed worlds peopled by characters only Percy might imagine—a mud man, a frozen boy, a bear who shops for baby food at Albertsons. It is a book to buy and keep, for readers of dark adventure and for fans of tightly crafted tales.

The first story “The Cold Boy” is introduced by “The forest is hardwood, and the branches of the oaks and sycamores are bare except for the crows, hundreds of them . . .” Then in the second paragraph “two sets of footprints lead like a rough blue stream from his [Ray’s] house to the pond. Two sets of footprints, yet he is alone on the ice.”

In the first hundred words Percy has created an ominous setting and a puzzle for the reader to think about. But the puzzle doesn’t end the way you’d suppose. In addition to the ominous setting created by hundreds of crows, Percy brings the crows back, again and again, at turning points in the story. They are precursors, to the end. In his book Thrill Me, Essays on Fiction, Percy talks about this “meaningful repetition,” its effective use in storytelling, and here, shows how to deploy it.

One of the most interesting stories in the collection is “Suspect Zero.” The tale is divided into sections by time, date, and place and the reader needs pay close attention to the headings. It is a fine tale of payback that moves with circular suspense, ending with a scene Tarantino would die to film.

The same story has a wonderful example of Percy’s careful and sound laden choice of words. “His footsteps ‘crunched’ on the gravel and then ‘thudded’ the blacktop and then ‘scritched’ the frost-stiffened grass as he returned to the house.”

Percy has a kinship with bears. His books, The Wilding and Refresh, Refresh are full of his knowledge, understanding, and admiration for them. In this collection the story “Heart of a Bear” shows another side of this being. Apropos for an author who admits that one of his memorable nightmares as a kid involved him sitting in the middle of a meadow, a scratchy recording of “Teddy Bears’ Picnic” playing, circled by abnormally thin bears, upright and swaying to the music. (Powells Books interview, October 2016)

“Heart of a Bear” comes close to a love story for bears. The story starts as the bear pulls itself from a trap, scaping flesh and fur from one paw, and finds refuge from pursuing dogs under a cabin inhabited by a couple and their baby. Watching them, “the bear could feel something inside him changing. For the first time, he was aware of more than simple, blind urges . . . A light flared in the darkness inside him; he was like a cave that had not yet been explored.” His efforts to introduce himself to the family fail; the couple see him as danger and die, leaving the bear to care for the baby. The bear is a tender caring parent, watching over the baby as it sleeps, driving to the supermarket for food, entertaining the baby with television and a visit to the park.

One of the traits of Percy’s work, and it is on display in this collection, is the attention to the details of various professions. In “The Cold Boy,” Ray is a taxidermist and the reader learns with precision what happens as the pet dog brought in by the local English teacher defrosts. In “Dial Tone” the routine of the cold caller, has enough of the minute-by-minute minutiae of scripts and hovering whip cracking bosses to make the reader almost—almost—sympathetic.

“The Uncharted” is a novella situated in the Alaska Triangle, a cold barren expanse of wilderness that has a habit of holding people and refusing to let go. In the last 30 years over 15,000 have gone missing. Missing, as in not found. It’s about ley lines and vortices. Fertile ground for Percy’s tight plotting, and even at the end of the tale, you’re not sure the story is finished. “Some myths have yet to be discovered.”

The stories in this collection are largely plot driven, with characters that will be less remembered than the tales they peopled, apart from the bear. You will remember him.

Buy Suicide Woods and Thrill Me, Essays on Fiction. The first, for its series of frightening literary rides; the second, to see how Percy puts it together.