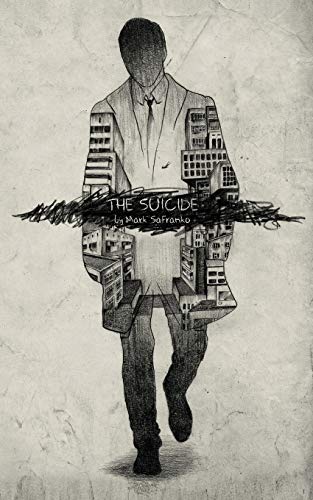 “Mark SaFranko is a master storyteller who never shies away from the darkest themes of guilt and retribution. The Suicide is a first-rate intelligent thriller, teeming with complex characters finely honed right down to the depths of their souls.”

Detective Brian Vincenti of the Hoboken Police Department has passed the horseshoe-shaped Hudson Arms numerous times on his way to work at police headquarters. This time, though, he is not passing but entering the residential building. Despite the building’s shape, it has not been very lucky for one of the residents, Gail Kenmore, an apparent suicide victim from her apartment window on the 11th floor.

From all observations, the young woman’s death is simply another statistic in a city with a long list of deaths-by-one’s-own-hand. Even Vincenti’s boss, Chief Hampton, has a blasé and somewhat cynical attitude to the tragedy when he tells Vincenti:

“I’m sure it’s nothing, but why don’t you just swing on by if you got a few minutes. You know the drill—do what you have to do to make ’em feel like we showed up.”

In other words, don’t waste any precious time on it. We’ve other matters more important to attend to than someone jumping out their apartment window.

But upon a more detailed inspection of the scene, Vincenti is no longer convinced it is a simple act of suicide and eventually comes to the conclusion that nothing about this tragedy is quite as it seems.

An initial search of the apartment fins things in order, but as time slowly slips by, Vincenti starts to see that order as something almost rehearsed, not natural. Like props from an unfinished play.

In one room he discovers an amateurish oil-on-canvas of a young woman with dirty blond hair. For some strange and puzzling reason—call it police intuition—Vincenti believes it is the likeness of Gail Kenmore, despite the fact he has yet to see a photo of the deceased.

Upon inspecting the portrait more carefully, his memory does a lurch, a bloody flashback of a time and place he would much rather forget:

“The subject of the painting looked like a kid he once knew. Not knew, but had an encounter with. A kid who didn’t have to die. Years ago, this was. Funny how that kid kept coming back to him at the damnedest times. Having to witness death was the price you sometimes had to pay as a cop.”

As if that’s not enough to contend with, Vincenti’s personal life is a total mess. Despite living with wife, Reggie, the marriage is nothing less than a charade and a divorce is just around the corner, both having affairs. The only thing keeping the glue on the farce is their four-year-old son, Nicky. The detective also carries the shame of having a brother, a former priest, now defrocked for being a pedophile.

On a subsequent day, Vincenti’s assigned to the investigation of the rape of a local florist’s assistant, which only complicates matters. The details of the ferocious attack seem only to focus his attention back onto Gail Kenmore’s unexplained and untimely death.

Officer Villas, an ambitious colleague of Vincenti, drags a suspect, Mohammed Phillips—a former star college football player with a history of petty offenses—in from the street.

Vincenti reluctantly grills Phillips about the rape, but doesn’t succeed in extricating a confession; however, he suspects Phillips may have had something to do with Gail Kenmore’s suicide. As Vincenti becomes obsessed with the dead girl, he soon discovers the nightmares of his past quickly catching up with him.

Mark SaFranko is a master storyteller who never shies away from the darkest themes of guilt and retribution. The Suicide is a first-rate intelligent thriller, teeming with complex characters finely honed right down to the depths of their souls. A marvelous and totally compulsive read from one of America’s finest writers.