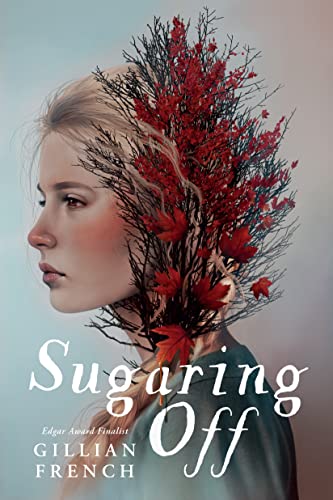 “Sugaring Off is a story about trust and absolution, and Gillian French has created a narrative that is engaging, well-told, and well worth investing in to experience this rich world.”

Gillian French does not disappoint with her latest novel Sugaring Off, the fifth novel for this Edgar award finalist. Sugaring Off is both a tension filled thriller and an engaging exploration of the main character Owl, making it a favorite read.

Owl is a 17-year-old girl who has been raised on a farm in the New Hampshire mountains by her Aunt Holly and Uncle Seth. Owl is comfortable and at home in the mountains. Her aunt and uncle offer a safe place away from people and from a past that has left her scarred. Owl was abused by her father when she was young, an injury that caused her partial deafness, a disability that serves to keep her at a distance from the people in her life. For this offense, her father was imprisoned, and Owl has no contact with him.

Owl has taken refuge in her home in the mountains where she tracks the wildlife around her and enjoys the beauty of the woods. The story is framed within one of the maple syrup sugaring seasons and is incited by the arrival of Cody, a boy hired to help with the sugaring that year. Owl's first meeting with Cody sets the two at odds with each other. She confronts him when he arrives, not knowing he was hired to help with the sugaring. She only sees a potential poacher who is threatening the family of foxes that Owl has been watching over.

After this rough first meeting, Cody makes several efforts to cut through the veneer that Owl maintains to keep people at a distance, but Owl sees Cody as gruff and resists his persistent overtures; however, he tests the edges of Owl’s isolation, and, eventually, she finds herself drawn to Cody's dark side, which she relates to as something within herself, and the two of them share a common background: both raised in abusive environments. Owl learns that her father has been released from prison and has been reaching out to her through numerous letters. Owl refuses to respond to his repeated attempts.

The setting of the New Hampshire mountains plays a prominent role in the story accentuating the isolation Owl feels and in some ways clings to. The fine prose and descriptive language French uses resonate with the history of the area.

“Owl nods, casting about for recognition within herself, something to relate all this to, the thought of a large varied family forever anchored to a broad and churning river. Of history, ancestry, blood. Her hook cuts through the water, snagging nothing.”

After fully engaging the reader with the character, fine prose, and setting, the story slowly and methodically shifts to a gripping thriller. Cody has a dark secret that slowly unravels through the story, and Owl finds herself drawn into the dangerous choice that Cody made that led to him being on the run and finding shelter in the mountains. This puts Owl into the crosshairs of dangerous people. She needs to use all her knowledge and skill of the mountain environment she loves and has grown up in to save herself and the ones she loves.

In the end, Sugaring Off is a story about trust and absolution, and Gillian French has created a narrative that is engaging, well-told, and well worth investing in to experience this rich world.