The Sugar Frosted Nutsack: A Novel 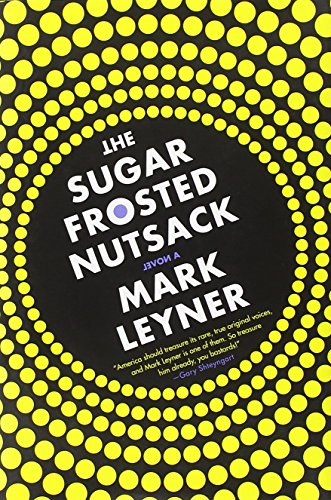 “Mark Leyner is a take-no-prisoners author, one who challenges his readers to either keep up or give up, no apologies made. And the pages of his books—including The Sugar Frosted Nutsack, his first in 15 years—sparkle with words that twinkle heaven’s lights in the night sky. . . . He leaves his readers like magician’s assistants: sawn in half with birds coming out of their hats. Again, that could be a good thing or bad, I leave it to you. As for me, The Sugar Frosted Nutsack is a headache with a dust jacket, pure and simple.”

The Sugar Frosted Nutsack is a work of postmodern fiction, which is to say it reads as if the author had taken his manuscript and, after tossing in a dictionary, dropped it into a food processor and turned it on. The resulting goulash of words is then given a title.

At least that’s how the book reads. Those working to build their vocabularies could do much worse—The Sugar Frosted Nutsack vibrates with obscure, uptown, and jargonated words. Words thrown at you like darts. Words hidden under carpets and in the candelabra. Words to the left of you, words to the right. Some join hands into sentences. Others don’t. If you yourself are postmodern enough, you get the idea. If not, you’ll be left at the station, ticket in hand, the train long gone—I promise you.

Mark Leyner is a take-no-prisoners author, one who challenges his readers to either keep up or give up, no apologies made. And the pages of his books—including The Sugar Frosted Nutsack, his first in 15 years—sparkle with words that twinkle heaven’s lights in the night sky.

And yet those who yearn for Dickensonian plot twists and turns, or those who seek knowable characters like a Mr. Darcy in every book, would do well to look elsewhere.

The Sugar Frosted Nutsack is the “story” of Ike Karton, who comes described as an “unemployed butcher, incorrigible heretic, and feral dandy who slicked his jet-black hair back with perfumed pomade and dyed his armpit hair a light chestnut color and who was dear to the Gods (themselves ageless, deathless).” He’s also noisily anti-Semitic, something of a misogynist, rather cruelly petty, and unspeakably stupid.

The aforementioned “gods” are something of a new pantheon living atop a high rise in Dubai. They arrived some time ago in a bus that was playing a song sweetly reminiscent of the Mister Softee jingle. Among these are:

“El Brazo (‘The Arm’). Also known as Das Unheimlichste des Unheimlichen (‘The Strangest of the Strange’), he was bare-chested and wore white/Columbia-blue polyester dazzle basketball shorts. He would soon be worshiped as the God of Virility, the God of Urology, the God of Pornography, etc.” He was the first god off the bus.

“The God of Money, Doc Hickory, who was also known as El Mas Gordo (‘The Fattest One’).

“The giantess C46, the Goddess of Clear Thinking (i.e. lucidity) was, for a brief period, also the Goddess of Clear Skin! It’s said that at the end of a long, grueling day, Shanice, (the very cute, unfailingly effervescent Goddess who functioned as sort of a traffic manager at meetings) noticed that no one had claimed Clear Skin, and she was like, ‘C46, since you already do Clear Thinking, how about taking this one?’”

And “El Burbuja, the God of Bubbles—a stubbly, pockmarked, severely astigmatic deity—originally just ruled over the realm of inflated globules. At first, everyone assumed he’d be satisfied as a kind of geeky ‘party God’ whose dominion would be limited to basically balloons and champagne. And no one paid much attention when he published an almost impenetrably technical paper in some obscure peer-reviewed journal in which he claimed sovereignty over Anything Enveloping Something Else. He then named himself, in rapid succession, God of Ravioli, God of Kishkes, God of Piñatas, God of Enema Bags, God of Chanel Diamonds Forever Bags, God of Balloon Angioplasty, and then God of Balloon Swallowers (the drug smugglers who swallow condoms full of drugs.)”

And so on. There are plenty more of them, including XOXO, who year after year is “consistently voted both “Most Sadistic” and “Friendliest” God by his peers.” You get the idea.

The gods dangle and entice; Ike Karton gets dangled and enticed. The story of his agony and ecstasy (“a story variously called throughout history Ike’s Agony, T.G.I.F. (Ten Gods I’d Fuck), and The Sugar Frosted Nutsack”) sort of rolls out at the reader all at once, leaving him to wonder at the moment of Ike’s death (no spoiler here, we are told the ending at the beginning of the book) whether the dancing, full-throttled events were all in the guy’s head—making the whole of this a tilt-a-whirled monologue of sorts—or whether the god’s sugarcoating extends to us all.

Regardless, The Sugar Frosted Nutsack is best if left to wash over you as you read. Don’t bother your pretty little head with narratives, protagonists, and such. We’re past that now. It’s Chinatown and it’s postmodern.

Those needing some degree of certainty when it comes to fiction should cling to this, taken from the heart of the book:

“”I think you could say that this is what The Sugar Frosted Nutsack is fundamentally about, I mean, this is my interpretation anyway—about how we each have this ridiculously finite number of things inscribed in our minds, and that what we do, moment by moment, is continuously postulate an extrinsic ‘world’ for ourselves by reshuffling and recapitulating these ridiculously finite number of things. But it’s a completely closed system—there’s no ‘world actually extrinsic to it. What makes Ike so magnificent is that he’s pared down his deck to a single card, The Hero—a man standing on his stoop, on the prow of his hermitage, striking that ‘contrapposto pose, in his white wifebeater, his torso totally ripped, his lustrous chestnut armpit hair wafting in the breeze, his head turned and inclined up toward the top floors of the Burj Khalifa in Dubai, from which the gaze of masturbating Goddesses casts him in a sugar frosted nimbus.’”

That clears everything up.

Mark Leyner is something of a prestidigitator with words, but white magic or black—you decide. He leaves his readers like magician’s assistants: sawn in half with birds coming out of their hats. Again, that could be a good thing or bad, I leave it to you.

As for me, The Sugar Frosted Nutsack is a headache with a dust jacket, pure and simple.