The Suffragents: How Women Used Men to Get the Vote 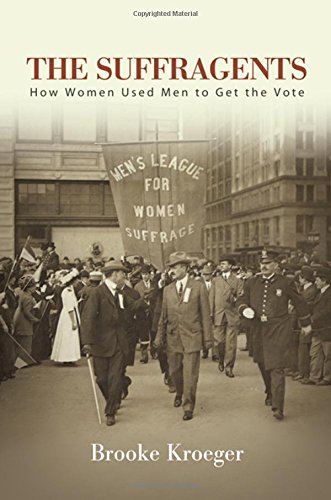 “a great resource, but sadly, offers little understanding of how modern 20th century political culture was forged and the role radical women and men played in this critical development.”

There are many ways to tell an historical story. Some offer a grand sweep covering decades, if not centuries, to explore broad social changes; others retell the trials and tribulations of the powerful and famous; some uncover long-hidden truths better forgotten; still others investigate a single occurrence, be it an earthquake, battle, assassination or street-corner accident, to reveal a deeper truth. Each historian tells a story in their own way.

Brooke Kroeger, an NYU journalism professor, is author of The Suffragents: How Women Used Men to Get the Vote, who offers a very different way to tell an interesting—and long overlooked—historical tale. She exhaustively details the role of the leadership men in the successful campaign to secure the right for women to vote in New York State and the passage of the 19th Amendment. Sadly, the storytelling method she employs undercuts the significance of the story she tells.

The role of men in the suffrage campaign is comparable to, say, the role of heterosexuals in the gay rights movement, men in the second wave feminist movement, or whites in the civil rights struggle. Such a story can offer valuable insight into both the movement and the ostensibly “enemy” (i.e. straight men, misogynists, and racists). The Suffragents painstakingly details the activities employed by New York men (and women) to secure social change. It offers little insight into the complex challenge it documents.

Kroeger doggedly follows the activities of leading historical male figures who took a stand regarding female suffrage. Most importantly, Max Eastman and Oswald Villard are at the heart of her story. She also considers such notables are Frederick Douglass and W. E. B. Du Bois, Charles Beard and Upton Sinclair, and Presidents Taft, Roosevelt, and Wilson, along with many other influential men.

Most revealing, she shows how the campaign to secure the vote for women was orchestrated, financed and run by very affluent women. These self-possessed, smart, and well-heeled women were part of the upper-middle-class and upper-class. Kroeger painstakingly documents how the campaign’s strategy of building an organization of respectable, socially-important men to champion suffrage paid off. Suffrage became respectable, and New York women secured the vote in 1919; the 19th Amendment giving all American women the right to vote was adopted in the following year.

An enormous amount of research went into this book. Kroeger, likely working with a good number of her students, must have put in endless hours collecting information about the suffrage movement, drawing on newspaper articles, memories, letters, and other primary documents. She’s must have created a digital compendium consisting, essentially, of everything she found. One can well imagine it being the digital equivalent of a zillion old-fashioned 3x5 index cards popular a generation ago.

The author chooses to tell her story by carefully detailing, one after another, the information stored on the imaginary digital-3x5 index cards. The book is organized in chronological order, each chapter a year from 1907 to 1920. Her detailing digs even deeper, following developments—involving individuals, organizations, campaigns, etc.—on a month-by-month basis. While informative, the style gets tedious and offers little insight.

Nor would they know that many leaders of the women’s suffrage movement, including Susan B. Anthony, were strong supporters of temperance. Those advocating for abstinence secured the 18th Amendment establishing Prohibition; many of the Christian right supported suffrage because they expected most women—middle-class, small town, and rural—to vote for conservative candidates.

Most troubling, the voting public, the people, are missing from this study. Who were the “ordinary” women and men who did the endless legwork, attended the rallies, marched on the picket lines and went to jail to build the movement? Why did ordinary, middle-class American men, the vast electorate, support the 19th Amendment? These questions are never addressed.

But what was Goodman’s position on suffrage? She was the Bernie Sanders of early 20th century America and thus suggests a different, more radical analysis. “Women’s demand for equal suffrage is based largely on the contention that women must have the equal right in all affairs of society,” she argued, conforming with convention. However, she recognized the limits of bourgeois democracy, the limits of electoral politics. “But that can not possibly blind me to the absurd notion that women will accomplish that wherein man has failed,” she insisted.

Most peculiar in Kroeger’s account is the absence of any mention of Margaret Sanger, among the most influential American women of the 20th century and a strong backer of suffrage. In 1914, Anthony Comstock indicted her for sending birth control information through the U.S. mail; two years later, on October 16, 1916, she and two other women opened the nation’s first birth control shop in Brooklyn. A half-century later, Sanger helped introduce the contraceptive pill, thus introducing modern sexuality.

A century later, we live in a very different world than that considered in The Suffragents. Women have the vote and the pill, and American society has fundamentally and forever changed. Kroeger’s study is a great resource, but sadly, offers little understanding of how modern 20th century political culture was forged and the role radical women and men played in this critical development.