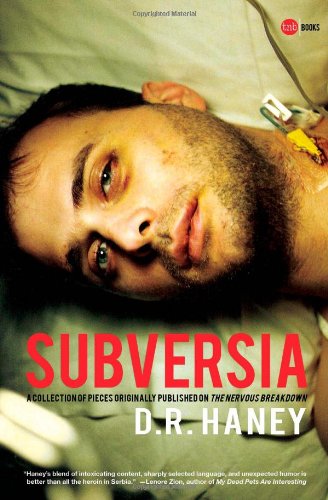 From random dark thoughts and angst-ridden apologies, to personal successes and once-in-a-lifetime moments, D. R. Haney’s Subversia is a collection of personal essays—and a fast ride on the wild side.

Subversia gives the reader a very up close and personal look at the author’s guilt, pain, and regrets. Some of the essays are an apology that came too late, while others speak of heart-wrenching loss of friends and loved ones, such as: “That’s What I’ve Been Trying to Tell You,” which reads like a poignant, posthumous love letter.

In keeping things on the level, Haney didn’t just include selections that portrayed him in a positive light, but included the warts as well, such as in “Cutty Sarked,” where he practically poisons himself with a liter-sized bottle of Cutty Sark at his own reading of his book, Banned for Life—then proceeds to scream unflattering things at his friends who came in support, while falling down in the street.

Though some of the essays could be sad and dark, not all of Haney’s life experiences were suicide-inducing, as illustrated in “Farrah! You’re Beautiful! I Love You!” which took place during his stay in New York when Haney and a friend were walking down the street and saw Farrah Fawcett—then in her prime—surrounded by paparazzi. Farrah graciously signed a dollar bill for him that Haney sent to his underwhelmed siblings in VA; which his sister subsequently used to buy a Coke.

However, writing wasn’t the only gig that Haney had his heart set on: acting was actually his first choice. Though he managed to land a few roles, long-term success was not meant to be. Finally heeding the call, he wrote the well-received, turned cult-favorite Banned—a nine-year endeavor.

As is usually the way, life as a writer afforded Haney an array of deadend, but life-sustaining, jobs such as a pizza maker/delivery person and air purifier salesman among other esteemed positions. But perhaps living on the fringe is how all good writers have to start out in order to write the hard-hitting, gritty stuff that sticks and gets them noticed.

The best thing about Haney’s writing is its unwavering honesty. Whether he’s fantasizing about killing his talkative girlfriend (and then sharing that thought with her) or relaying a childhood memory, he just lays it out for all to see.

Subversia is an accounting of real life in perfect focus—short vignettes of moments in time that may not have any permanent documentation, save for the images forever burned in memory.

Haney is a living example that sometimes you don’t get to choose the vocation, it chooses you.