The Subtle Art of Not Giving a F*ck: A Counterintuitive Approach to Living a Good Life 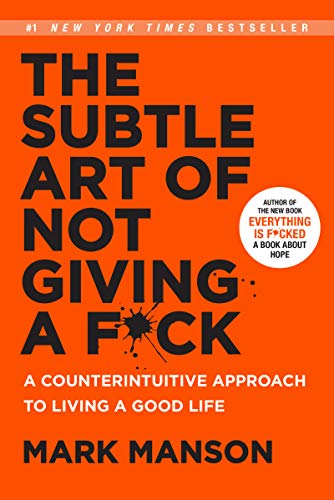 An anecdote about the Bizarro poet and novelist Charles Bukowski opens the new book by (self appointed?) “star blogger” Mark Manson, The Subtle Art of Not Giving a Fuck: A Counterintuitive Approach to Living a Good Life.

It makes for a long quotation, but it is important for understanding author Manson’s conceit.

“Charles Bukowski was an alcoholic, a womanizer, a chronic gambler, a lout, a cheapskate, a deadbeat, and on his worst days, a poet. He’s probably the last person on earth you would ever look to for life advice or expect to see in any sort of self-help book.

“Which is why he’s the perfect place to start.

“Bukowski wanted to be a writer. But for decades his work was rejected by almost every magazine, newspaper, journal, agent, and publisher he submitted to. His work was horrible, they said. Crude. Disgusting. Depraved. And as the stacks of rejection slips piled up, the weight of his failures pushed him deep into an alcohol-fueled depression that would follow him for most of his life.

“Bukowski had a day job as a letter-filer at a post office. He got paid shit money and spent most of it on booze. He gambled away the rest at the racetrack. At night, he would drink alone and sometimes hammer out poetry on his beat-up old typewriter. Often, he’d wake up on the floor, having passed out the night before . . .

“Then, when Bukowski was fifty, after a lifetime of failure and self-loathing, an editor at a small independent publishing house took a strange interest in him. The editor couldn’t offer Bukowski much money or much promise of sales. But he had a weird affection for the drunk loser, so he decided to take a chance on him . . .

“Upon signing the contract, Bukowski wrote his first novel in three weeks. It was called simply Post Office. In the dedication, he wrote, ‘Dedicated to nobody.’

“Bukowski would make it as a novelist and poet. He would go on and publish six novels and hundreds of poems, selling over two million copies of his books . . .

“Stories like Bukowski’s are the bread and butter of our cultural narrative. Bukowski’s life embodies the American Dream: a man fights for what he want, never gives up, and eventually achieves his wildest dreams. It’s practically a movie waiting to happen. We all look at stories like Bukowski’s and say, ‘See? He never gave up. He never stopped trying. He always believed in himself. He persisted against all the odds and made something of himself.’

“It is then strange that on Bukowski’s tombstone, the epitaph reads: ‘Don’t try.’”

After having promised a “counterintuitive approach to living a good life,” Manson makes good on his promise, in a oddly self-helpful manner that, if it has a parallel at all in American letters, rather strongly suggests Kurt Vonnegut’s Breakfast of Champions—which itself offers a good many of the same bits of advice—with Bukowski here standing in for Vonnegut’s beloved curmudgeon, Kilgore Trout.

And that epitaph against trying, well, it pretty much tells you everything you need to know about the book ahead.

About Bukowski, our author continues:

“The genius in Bukowski’s work was not in overcoming unbelievable odds or developing himself into a shining literary light. It was the opposite. It was his simple ability to be completely, unflinchingly honest with himself—especially the worst parts of himself—and to share his failings without hesitation or doubt.

“This is the real story of Bukowski’s success: his comfort with himself as a failure. Bukowski didn’t give a fuck about success.”

Thus the reason for emulation: Bukowski’s almost Buddhist ability to want nothing by way of having not a single fuck to give about the thing in life about which most of us have entirely too many fucks to give.

And thus the book opens with an insight and a bit of a promise:

“Self-improvement and success often occur together. But that doesn’t necessarily mean they’re the same thing.”

“The problem is that giving too many fucks is bad for your mental health. It causes you to become overly attached to the superficial and fake, to dedicate your life to chasing a mirage of happiness and satisfaction. The key to a good life is not giving a fuck about more; it’s giving a fuck about less, giving a fuck about only what is true and immediate and important.”

The real surprise about The Subtle Art of Not Giving a Fuck is that the book makes a surprising amount of sense. And that it makes for both compelling and entertaining reading. And that, most of all, it is a thoughtful work—far more thoughtful than the title would suggest, sort of a millennial Power of Positive Thinking—and one that is very well written.

Author Mark Manson, whose online bio consists of: “I am an author, blogger and entrepreneur. I write personal development advice that doesn’t suck. Some people say I’m an idiot. Other people say I saved their life. Read and decide for yourself,” seems to stress entrepreneurship over advice on that same site, as subscriptions are required to “get access to more amazing shit,” and to take part in the author’s online courses on topics like “Overcoming Anxiety,” and “Dating & Relationships.”

Thus the comparison to Norman Vincent Peale seems apt. And Manson has come up with nothing new here, in selling the public his secrets of a happy and healthy life.

The usual tropes are all here, overcoming adversity and finding the value in that struggle. Releasing fear. Accepting self. But in The Subtle Art, the advice comes dressed in hipster duds.

Not that there’s anything wrong with that.

Indeed, while Manson may be presenting concepts as old as the ancient Greeks and beyond, that come packed into all world cultures, and all ages, his successful reinvention of the material comes from the way in which old concepts are made new. He uses some pretty creative examples: Second Lieutenant Hiroo Onoda of the Japanese Imperial Army, who managed to not hear the news that World War II had ended and therefore stayed at war on the small island of Lubang until 1972; as well as musician Dave Mustaine, founder of Metallica and Medadeth; author and philosopher William James; and the author’s own first girlfriend, who, although unnamed, is given a great deal of credit for the pain she put him through.

And by shaking off the usual proscenium upon which self-help is usually placed and giving us instead “self-help in the round.”

Manson honors authenticity. Honors self-acceptance. Honors failure and the many things that failure has to offer. And, especially, Manson honors uncertainty, about which he writes:

“Uncertainty is the root of all progress and all growth. As an old adage goes, the man who believes he knows everything learns nothing. We cannot learn anything without first not knowing something. The more we admit we do not know, the more opportunities we gain to learn.”

Which has value, as does the old anecdote about Pablo Picasso in which he sits in a café sipping coffee and doodling on a napkin. When he rises to leave, the woman at the next table offers to buy the napkin and asks if he will sell it.

“The woman’s head jolted back as if he had just flung a brick at her. ‘What? It took you like two minutes to draw that.’

“’No, ma’am,’ Picasso said. ‘It took me over sixty years to draw this.’ He stuffed the napkin in his pocket and walked out of the café.”

For those of us of a certain age, this certainly resonates powerfully. And for those who, like our author, came of employment age at the moment of the Great Recession, this anecdote and the many others that come stuffed in this slim volume all give much to ponder about life and its myriad contents.

Best is the last chapter, called “. . . And Then You Die,” in which the author stands on a cliff high up over the southern tip of Africa and quotes Portuguese: Ele dobra a Cabo de Boa Esperanca: “He’s rounding the Cape of Good Hope.” Ironically, it means that the person’s life is in its final phase, that he’s incapable of accomplishing anything more.”

Of that moment on that cliff, there is this:

“My body shudders, the fear becoming euphoric and blinding. I focus my mind and clear my thoughts in a kind of meditation. Nothing makes you present and mindful like being mere inches away from your death. I straighten up and look out again, and find myself smiling. I remind myself that it’s all right to die.”

After jumping back full circle to Bukowski one last time (“We’re all going to die, all of us. What a circus! That alone should make us love each other, but it doesn’t. We are terrorized and flattened by life’s trivialities; we are eaten up by nothing.”), Mark Manson suggests that, should his readers still be unsure of what is and is not important in their lives, they might go stand on a high cliff themselves.

And yet, perhaps, in writing The Subtle Art of Not Giving a Fuck, he can save them the trouble.