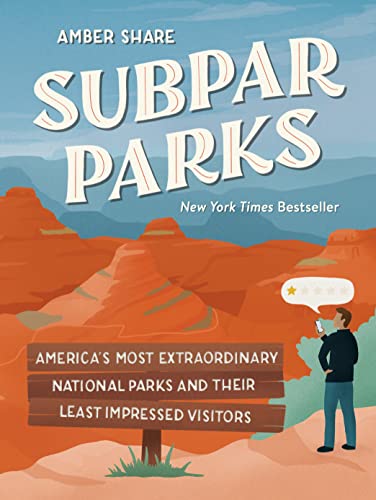 You know the drill. Every year, hundreds of thousands of folks traverse the continent to visit America’s best idea: the National Parks. Most leave with memories they’ll treasure for a lifetime; a few, the unmerry band of brothers that must hate everything at all times, can still summon criticisms for our greatest treasures. Living in modernity, they are able and, it seems, obliged, to leave their ugly thoughts on the internet forever. The comments are petty and stupid: the Grand Canyon is a hole, a very large hole; at Yosemite, trees block the view, and there are too many gray rocks. Subpar Parks—the internet sensation that, like the Parks themselves, has hundreds of thousands of fans—provides its loyal followers with the opportunity to not only laugh at others but, more importantly, to feel superior. The morons are forgotten and forgettable, here, but their comments are as permanent as the internet posts they foolishly chose to enshrine eternally on the world wide web. We, in our presence, get to know that we would never be so petty, so ugly, so empty.

It’s a one-note joke, but a good one. All travelers know the feeling of the endless, gormless clods underfoot, especially in the Instagram generation—the unappreciative and unseasoned that seem to grow in number and be, somehow, always just a little bit different from us.

The National Parks are American, and there are few things more American than the obligation to make as much money as possible. Amber Share, the book’s author, should be applauded, in American fashion, for releasing a book to accompany and monetize her well-known work and very visible web presence. It’s an easy thing to criticize—a book of a meme, goodness!—but it shouldn’t be: it’s beautifully produced, and the publishers at Plume (an imprint of Penguin Random House) have conferred divine favor on her work, giving it the weight and feel and dignity of a fine art book.

They should, because it is. Hidden beyond the yucks and guffaws is something larger: stripped of the jugginses flocking to Yelp to complain about all the insects living in the insect-filled forest, this book would really be a vehicle for the beautiful visual work of Share, a designer, who takes a topic that’s been done to death and somehow still makes it feel fresh and new.

With obvious nods to the WPA style that made the parks integral to American identity, she’s updated the work to our modern times, creating lush illustrations abutted against a loving text that betrays the short-sighted reviewers she’s usurped to become famous. The whole of the text is devoted not to burying the Parks, but to praising them, urging readers back to the land. Any comedian can tell you that the core of modern humor is to tell people something they know but are afraid to say; here, Share goes to great lengths to do just that. Underneath all of this is a reminder that the beauty of our world has not changed, but we have; we’re harder to please and absolutely impossible to reason with. The man at Yosemite is wrong: it is not the trees that have blocked our view.

The joke presented is perhaps best consumed as an Instagram feed, but there is beauty, here, too, and much of it. So, yes, give it to a friend, a colleague, a coworker, or even a person you don’t know that well but to whom you are obliged to give a gift. They, too, have seen the meme.

Perhaps they’ll laugh at the joke. Perhaps, once they’re done, they’ll wonder if they, too, are missing the view.