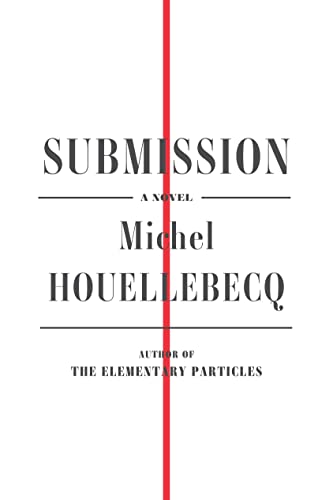 Michel Houellebecq, the enfant terrible of French letters, is no longer an enfant and Submission is far from terrible, but his latest novel is, as usual, an event and a provocation.

As with Nietzsche, Martin Amis, and Nabokov, Houellebecq disturbs and unsettles the reading public, especially the faction that insists on misreading and misinterpreting his work. The fundamental charges leveled at Submission (the conventional English-language transliteration of “Islam”)—racism, Islamophobia, theocrasm—like the charges leveled at his previous novels—sexism, elitism, reactionaryism—are patently false. To suggest that the novel is anti-Islamic is nothing more than willful misprision or a woeful inability to comprehend the rudiments of fictional narrative. The charges are puerile and, when coming from professional readers or trained critics, rather embarrassing.

Houellebecq is perhaps being intentionally provocative but that is, far from criminal or actionable, a necessary component of serious art. Once again, he shares this predilection with Nietzsche, Amis, Nabokov—his forebears and, indeed, his peers. He provokes because that’s his job, his duty, his calling, and perhaps because he’s aware that, for so many, our default setting encompasses professional self-victimization (while simultaneously pretending that one is anything but a victim) and feigning insult and offense at every turn. Living in the modern world is like playing pick-up basketball with people who insist on calling foul at every bump and nudge, even the ones that don’t exist, and diving for the floorboards having already prepared the facial expression that will draw the most sympathy from onlookers. That’s so offensive. That’s so sexist. That’s so inappropriate. Ad infinitum. We look for offense, we find it everywhere, we revel in the attention, and we pretend otherwise. The imposture is tiresome and counterproductive. It does not bring people, or peoples, together; it tears us apart. This is, in large part, the topic of Submission, which makes it all the more effective, poignant, and clever that Houellebecq reflects this in the novel’s style and tone, in the contextual complex surrounding the novel and its predestined “controversial” reception. He is pulling our strings, especially those of his knee-jerk detractors.

Submission concerns the midlife crisis of a literature professor. He’s giving up on love, sex, family, and career. At the same time, France itself is buying a red sports car and pricing toupees. The year is 2022. The National Front is set to take over. To thwart this, the Socialists and Islamicists form a coalition and Mohammed Ben Abbes becomes president.

Society is quickly transformed. Only Muslims are allowed to teach at the universities, now privatized, and polygamy is made legal. The public reaction is largely fear and panic, as you would imagine. This is the standard and natural response to change, especially unforeseen sweeping social change. If there is an element of racism or xenophobia in society, so be it. That would undoubtedly be the case, in any country facing such challenges. This does not make Houellebecq himself a racist any more than it makes him a Rotarian or used-car salesman. To suggest this is neither cogent nor true. It would amount to non-sequitur, absurdity, irrational name-calling.

Houellebecq is reporting the news of contemporary society, and he’s doing so every bit as objectively as a journalist, probably moreso, but he does it with the flair and style of a master fictionist. This contributes to the objections of his detractors, or rather his world-class crybabies and whiners who build their own personae from the rubble of perceived and manufactured insults and –isms.

Houellebecq is funny, devilish, acerbic, ironic, sarcastic, sardonic, solemn and moralistic, all at the same time; these distinct but by no means separate elements exist in the marrow of every passage, every line, every morpheme and phoneme. They coexist not strangely or unpredictably but quite naturally—such is the nature of art.

Houellebecq’s art. As Francois, the reluctant academic and ambivalent scholar at the center of Submission, strolls through the streets of Paris, where much of Ulysses was composed, the reader is privy to his passing, Bloomlike, seemingly random musings. Francois reflects on how the immanent Islamicization of France might affect the shopping plaza through which he is walking:

“The Bricorama would stay, but the Jennyfer's days were numbered. It had nothing to offer the good Muslim tween. Secret Stories, which advertised name-brand lingerie at discount prices, had nothing to worry about: the same kind of shops did a booming business in the malls of Riyadh and Abu Dhabi. Neither, for that matter, did Chantal Thomass or La Perla. Hidden all day in impenetrable black burkas, rich Saudi women transformed themselves by night into birds of paradise with their corsets, their see-through bras, their G-strings with multicolored lace and rhinestones. They were exactly the opposite of Western women, who spent their days dressed up and looking sexy to maintain their social status, then collapsed in exhaustion once they got home, abandoning all hope of seduction in favor of clothes that were loose and shapeless.”

So much humor, truth, and compassion. Houellebecq, far from inciting anti-Islamic invective, is conciliatory and humanistic here, depicting Muslim and Western women as two halves of the same human whole, driven by the same needs and desires. Far from bullying or belittling, Houellebecq is merely reporting what is already in plain sight, if we choose to see it.

Directly afterward, he juxtaposes this with an analysis of a “French” family at home, entertaining friends:

“Their mistake, I realized as soon as I set foot in his backyard and said hello to his wife, was choosing a Friday night. She’d been working all day and was exhausted, plus she’d been watching too many reruns of Come Dine with Me on channel M6 and had planned a menu that was much too ambitious. The morel soufflé was a lost cause, but just when it became clear that even the guacamole was ruined and I thought she was going to break down in sobs, her three-year-old son started screaming at Bruno, who’d gotten shit-faced as soon as the first guests arrived and couldn’t manage to turn the sausages on the grill, so I helped him out . . . before I knew it, the lamb chops were covered in a film of charred fat, blackish and probably carcinogenic, the flames were leaping higher and higher but I didn’t have any idea what to do, if I fiddled with the thing the bottle of butane could explode, we were alone before the mound of charred meat, and the other guests were emptying the bottles of rosé, oblivious.”

On the cusp of social and political turmoil, the French are fiddling while grilled meats burn. Houellebecq compresses great insight, sadness, and ultimately bathos into this wonderfully precise, detailed, vivid passage. Though he is often scolded, like Amis or Bret Easton Ellis, for his putative coldness, these descriptive events are far from chilling, banal or nouveau-romanesque. Rather, Houellebecq displays kindness and compassion for his human subjects.

Houellebecq observes a world in which culture, religion, race, ethnicity, values, and, more than anything, self-interest and distorted self-perception are in conflict, a conflict that increasingly wriggles toward faction, violence, and rhetoric. In so doing, he portrays some Muslims as “bad,” much like he has portrayed some men, women and children as “bad.” This is not racist or anti-Islamic. He is not therefore a jihater. It is simple fact. It is self-evident. It is a statistical certitude that some Muslims will be and are, “bad.”

In any event, it’s beside the point. The writer’s job is to create imaginary worlds. His visions do not have to reflect reality, and they never, in any straightforward or definitive sense, reflect “him.” A child could see this. Houellebecq’s characters, therefore—who often seem like cousins, or at least drinking buddies, of Meursault—are not the author himself. Of course, even if they were, what of it? We all have opinions and the right to express them; critics, professional and otherwise, should do a better job pretending to value free speech and personal freedom. The Houellebecqs of this world write their Submissions, in part, to remind us how weakly we support the principles we claim so brazenly to endorse.