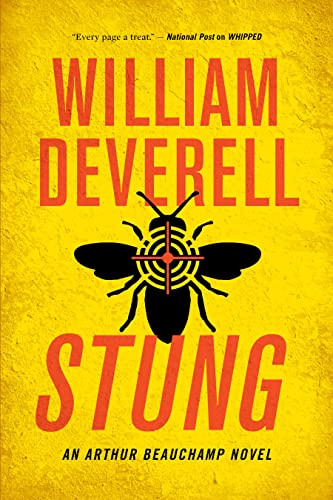 “Along with its humor, every chapter of Stung offers both the cost of taking moral action, and the deep suspense of being human. “

Stung is the eighth of Canadian author William Deverell’s award-winning Arthur Beauchamp legal thrillers. Dogged by the challenges of his own aging mind—unsure whether he can absorb the details of a case, let alone defend a group of radicals who’ve clearly committed a crime—lawyer Arthur Beauchamp finds himself caught in a tripled disaster. First, there’s the defense of the seven urban radicals who invaded an insecticide factory to bring attention to the mass deaths of honeybees resulting from its products. Second, his home retreat on an island off Canada’s west coast is under threat from a mining company. And third, he keeps disappointing his politician wife, who’s spending a lot of her time in Toronto and other urban and urbane locales. Oh, and then there’s the dog problem.

Deverell doubles the size of this enjoyable crime-and-defense enterprise to nearly 600 pages by narrating from both Arthur’s point of view and that of one of the defendants, the very clever (if in many ways naive) activist Rivie Levitsky, whose task to prepare for the factory attack was the almost-seduction of one of its managers. (This is one of very few crime novels in which She gives He a “roofie,” for extraordinary reasons.) And Rivie is a delight, full of surprises and passion. But it’s Arthur that Deverell presents as the character under most threat, and under demand for personal courage and change.

When he first appears, in the second chapter, he’s not in great shape after stepping on a wasp nest in his pasture: “Arthur Beauchamp is in his underpants, seated, his right foot elevated, an inflated pink balloon, and it hurts like the wrath of God. . . . a cold pack, calamine, and baking soda offer not a tittle of relief. . . . Arthur used to don his gown for occasional courtroom forays, always scuttling back to his sanctum sanctorum with great heaves of relief. That’s history. Let his record of thirty-six straight wins be his legacy.”

His intent has been to retire, continue his island paradise, love his dog. But the dog dies and gets replaced by an enormous and spirited Irish wolfhound that can’t stay out of trouble; paradise gets invaded by commerce; and the only ally he has who’s capable of rescuing his home is a lawyer who’s involved with the arrested activists and maneuvers Arthur into a swap: One will save the island, and the other will do his best to save the activists (who, in the name of “all publicity is good publicity,” are already proclaiming their “criminal actions” as utterly necessary to save the globe).

Despite its length, it’s almost impossible to put down Stung—Arthur and Rivie are warmly likeable, doing their best to stand up for their moral imperatives, despite the way they stumble: Arthur from aging (can he re-engage his courtroom dynamism if he can’t recall names anymore?), and Rivie from impulsiveness and at times terror. The threats are well portrayed, the action quickly paced, and the stakes enormous. Plus, Deverell provides wordplay and humor in moments like this one, when Arthur narrowly avoids yielding to a neighbor’s seductive offer:

“Now, in the bathroom, standing under a hot, cleansing torrent, aghast that he’d skirted so close to a disaster of orgasmic magnitude, hardly able to fathom how, God knows how, he’d found enough strength to deny the primitive urgings of his id, desperate to believe he had not encouraged what nearly happened, feeling shame but still flushed and quivering with carnal heat, Arthur takes matters into his own hands.”

But of course, there’s also courtroom drama, and continued backsplash of crime and threat for the defendants, from both the corporation they assaulted and their public. Along with its humor, every chapter of Stung offers both the cost of taking moral action, and the deep suspense of being human. Shelve this one in the “read it twice” section, for good fun and thoughtful provocation around what it will take to save the planet and its best people.