The Stuff That Never Happened: A Novel 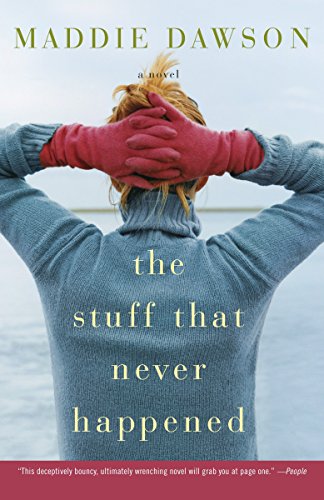 Annabelle McKay is a student at U.C. Santa Barbara when she meets her future husband, Grant, at a students’ apartment eviction party in Isla Vista. Annabelle and Grant have a whirlwind romance, and she drops out of school to marry him; Grant’s been offered a teaching position at a college in Manhattan, and they move to the East Coast. The new couple has no place to live, so in the interim they move in with Grant’s mentor, Jeremiah, Jeremiah’s wife Carly, and their toddler twins.

The newly married Annabelle is shocked to find that Grant has no time to spend with her. He leaves early each morning to prepare for his instructor duties and returns late. The same holds true for Jeremiah when it comes to Carly, a former dancer who is now also an instructor. Thus, Annabelle and the older Jeremiah (who is home on a one-year sabbatical) become responsible for maintaining the apartment and taking care of the children. It is not too difficult for the average reader to see where this is headed, as the abandoned parties come to seek comfort in each other’s bodies and beds.

Yes, this is chick lit (popular fiction) disguised in the trappings of a serious adult novel; although it is an interesting twist on the usual telling, which places the new husband in the role of unhappily just married. It is usually, on page and in film, the young man who finds another to soothe his discomforts.

Annabelle’s infidelity is discovered by Grant, and this stolid man advises her to never return to him if she elects to live with Jeremiah. But somehow a deal is struck—after a series of implausible events—and Annabelle and Grant make a pact to live together again as husband and wife. A key condition attached to the pact, as insisted on by the proud Grant, is that they never speak of Jeremiah again or of “the stuff that never happened.”

No, this is not where the story ends; it is where it begins. As the novel opens, it is almost 27 years later and a still unhappy and restless Annabelle is Googling for information on Jeremiah. She comes to find that he’s a widower now, as Carly has died of cancer. Annabelle and Grant now live in a community outside of New York City, but she cannot stop herself from thinking of what would happen if she were to somehow run into Jeremiah while visiting her pregnant, married daughter in the city.

Even Annabelle knows that such a chance meeting is unlikely—except in novels such as this one. After another set of implausible events, Annabelle has moved to the city to take care of her daughter and guess—just guess—who she runs into! Not much more needs to be said about the plot.

Blurbs on the book jacket compare author Maddie Dawson to both Elizabeth Berg and Anne Tyler, which seems to this reader a status she has not earned. While Dawson writes in the “straight ahead” fashion of Berg, her style is occasionally plodding by comparison and the time shifts are distracting. There may also be a hint of Tyler’s factual reporting but without Tyler’s sense of suspense. When Anne Tyler writes about small events in the lives of her characters, there’s a feeling that something unexpected is about to occur. (Something is going to happen, and we don’t know what it is.) Such is not the case with the predictability of The Stuff.

Then there’s the matter of the characters. This reviewer encountered not a single likable character in this novel, which provided little incentive to continue the reading. In fact, while only pages away from the story’s end I realized that it didn’t seem to matter to me anymore how it ended; there being no one to relate to in the cast.

To be fair and clear, this is not a story without merits—it does offer some interesting thoughts on parenting and life’s regrets. But there are many other novels out there about re-living one’s life over again, or returning to the scene of one’s youth, and most of them (such as Allison Winn Scotch’s Time of My Life or Berg’s The Last Time I Saw You) offer more interesting tales than this one.